ON THE GROUND IN TWIN FALLS, ID

‘Enough with the masks!’: Behind Idaho’s struggle to contain the coronavirus surge 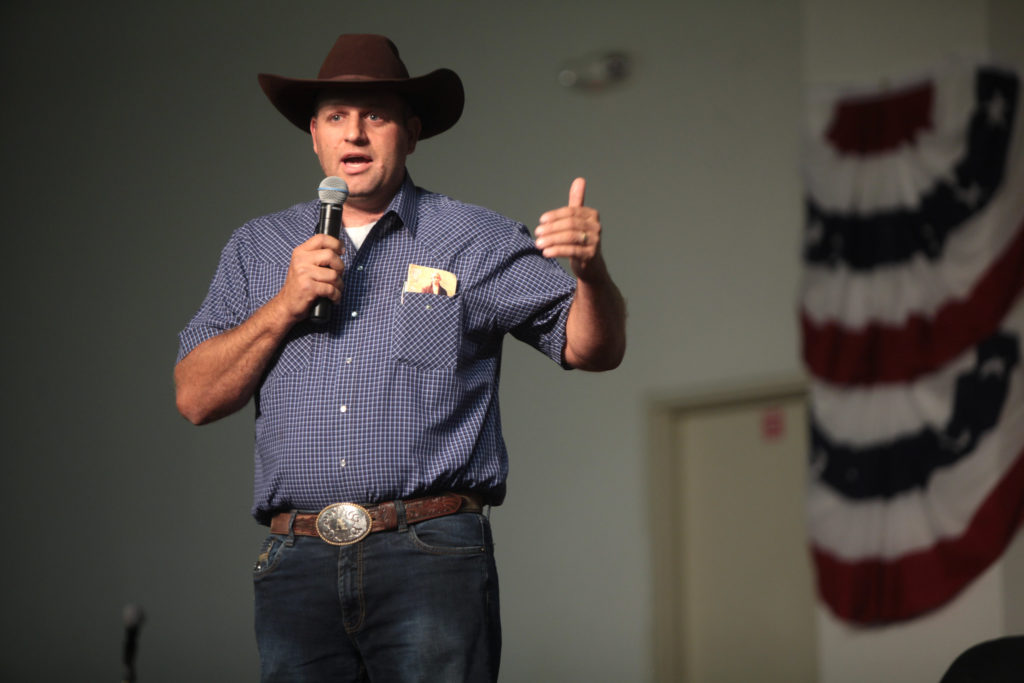 Ammon Bundy, a high profile libertarian activist who lives in Idaho has been at the forefront of protests against mask mandates. Here, speaking at a forum hosted by the American Academy for Constitutional Education (AAFCE) in 2014. (Photo by Gage Skidmore/Wikimedia Commons)

TWIN FALLS, IDAHO — A man in a red button-down shirt and a black face mask stands, armed folded, in front of a doorway as another man in a cowboy hat — no mask — argues with him, angling to get inside.

“This building belongs to the people,” the man without a mask says. A woman filming the interaction yells, arguing that the public should be allowed inside the office, a public health center in southwestern Idaho.

But the man in the doorway, a health district employee, stays put, extending his arm across as a barrier. The camera pans to show the scene behind them: About 50 people gathered outside Southwest District Health in Caldwell, a city of about 50,000 just west of Boise.

“Cancel the meeting, let us in, or call officers to arrest us,” says the man in the cowboy hat, the leader of the group gathered. That’s Ammon Bundy, a libertarian activist, who lives in nearby Emmett, which is within the health district’s territory.

Bundy was in the national spotlight in 2016, when he helped lead an armed occupation of Oregon’s Malheur National Wildlife Refuge that led to a month-long standoff with federal forces. A vocal opponent of Idaho’s response to the coronavirus pandemic, which included a stay-at-home order and tiered reopening plan, Bundy has organized gatherings in opposition to Republican Governor Brad Little’s stay-at-home order. He even threatened to storm Little’s house in March, and compared his policies to slow the virus’ spread to the Nazi regime.

As the scientific consensus around wearing face masks grew this spring, as an effective and easy strategy to limit disease spread, so too did opposition to them, especially after President Donald Trump mocked masks in May and the vice president refused to wear one, including when visiting a hospital in April.

Now, 34 states have issued mask requirements, which most Americans support. Doctors I spoke to in Idaho say the majority of their patients accept and readily don face masks. And while health leaders say they don’t understand why face masks have been placed on the political scale, that’s precisely what’s happened in Idaho, as Governor Brad Little handed over Idaho’s coronavirus response to local entities, including the state’s seven, independent public health districts.

Now mask mandates, limits on large gatherings and plans for school reopenings are being handled, primarily, at the local level. For health districts, the decisions are made by the boards, typically filled with county commissioners — some of whom are up for reelection this November, and are opposed to government mandates.

“I think we need to be very careful issuing orders to a free society,” said Twin Falls County Commissioner Jack Johnson when the health district there was considering a face mask mandate. He said he supports the use of masks, but “it’s a personal choice.”

Some board members have shared misinformation about face masks. “Enough with the masks!” Viki Purdy, a Southwest District Health trustee, wrote on her Facebook page in late July, after receiving pushback for her previous inaccurate posts. “They don’t work and they definitely can hurt you!” Purdy’s Facebook post is now hidden.

On that mid-July day, the Southwest District Health board was set to discuss potential strategies to combat a recent surge in infections. On the meeting agenda was an ordinance that would require residents to wear face masks.

Inside Southwest District Health that morning, a few weeks ago, some board members gathered around a table, while others joined the meeting virtually, along with around 200 members of the public. At the beginning, it appeared the health district was having trouble connecting to its audio system – a complication that’s been ever more common as entities, even ones less accustomed to public participation, figure out how to make meetings accessible online.

Half an hour in, though, a board member entered the room to announce that the meeting would be cancelled. With the group of protestors gathered outside, law enforcement was concerned about everyone’s safety.

The video, filmed by a protestor and posted to Facebook, revealed what had been going on during that time. Bundy eventually pushed past the health district employee and his group made its way inside the building without wearing the required masks.

In the lobby, the arguments continued.

“You can’t mandate masks for a human being,” Bundy shouted at the board chairman.

The protestors wanted access to the meeting in person because they didn’t consider the online option true public access. But the health district hadn’t planned to accommodate a large group, as physical distancing wouldn’t be possible. After a while, district officials called the police, who advised the board to cancel the meeting. The protestors, satisfied, then dispersed.

The health district later said the protestors were interrupting clinical services at the health office and harassing staff in the parking lot. The meeting was rescheduled for the following week, but it was postponed again due to “safety concerns.”

Meanwhile, waiting on the cancelled Zoom call were numerous Boise-area hospital executives, set to give updates to board members. Idaho’s case numbers jumped ten-fold in about a month — from roughly 30 a day in the beginning of June to almost 400 a day in the beginning of July. The hospital leaders were already seeing these high caseloads translate into increased hospital admissions.

As states like Florida, Arizona and Texas became the primary U.S. hotspots, these Idaho hospital officials were worried about the state’s near future, they said, and pleaded with public officials, such as those on the health board, to take action.

“I see it as my duty,” said Dr. David Peterman, a pediatrician and the CEO of Idaho’s largest independent medical practice, Primary Health Group, who, like other local health executives, has been informing public officials about what they’re noticing on the ground — at drive-in testing sites and intensive care wings. With their harrowing statistics and charts, they tried to convey a sense of urgency.

In the neighboring health district, which covers the capital city of Boise, the health board heard these concerns from hospitals and decided to mandate masks, close bars and limit large gatherings.

Since then, two other health districts have required face masks for certain counties, but Southwest District hasn’t followed suit despite pleas from medical professionals. That means you can go to a bar without a face mask in Caldwell, but drive thirty minutes to Boise and face a different standard.

“If Southwest District Health doesn’t take action, my concern and the concern of the hospitals is that this will surge, fill up our hospitals, and then there’ll be a crisis,” said Dr. Peterman.

When the health district finally held its meeting, it was in the Canyon County courthouse, in Caldwell, to ensure safety, it said. People filled the wooden benches, primarily to argue against a mask mandate. But as the chairman would explain, a mandatory order was no longer on the agenda after two failed attempts to hold the meeting — the board wasn’t going to consider it.

Also removed were the presentations from hospital leaders. Details of intensive care units filling up, percent positive testing rates nearing 20% and the increasing need to bring in traveling nurses from outside the region were buried in the board’s meeting agenda for the day, but were never discussed.

As the meeting began, a member of the public asked the sheriff whether masks were required in the courthouse. No, he said. This is Canyon County, not Boise. And the crowd erupted in a cheer.

Rachel Cohen covers south central Idaho for Boise State Public Radio. This dispatch is part of a series called “On the Ground” with Report for America, an initiative of The GroundTruth Project. Follow Rachel on Twitter: @racheld_cohen.