ON THE GROUND IN SUMNER, MISS. 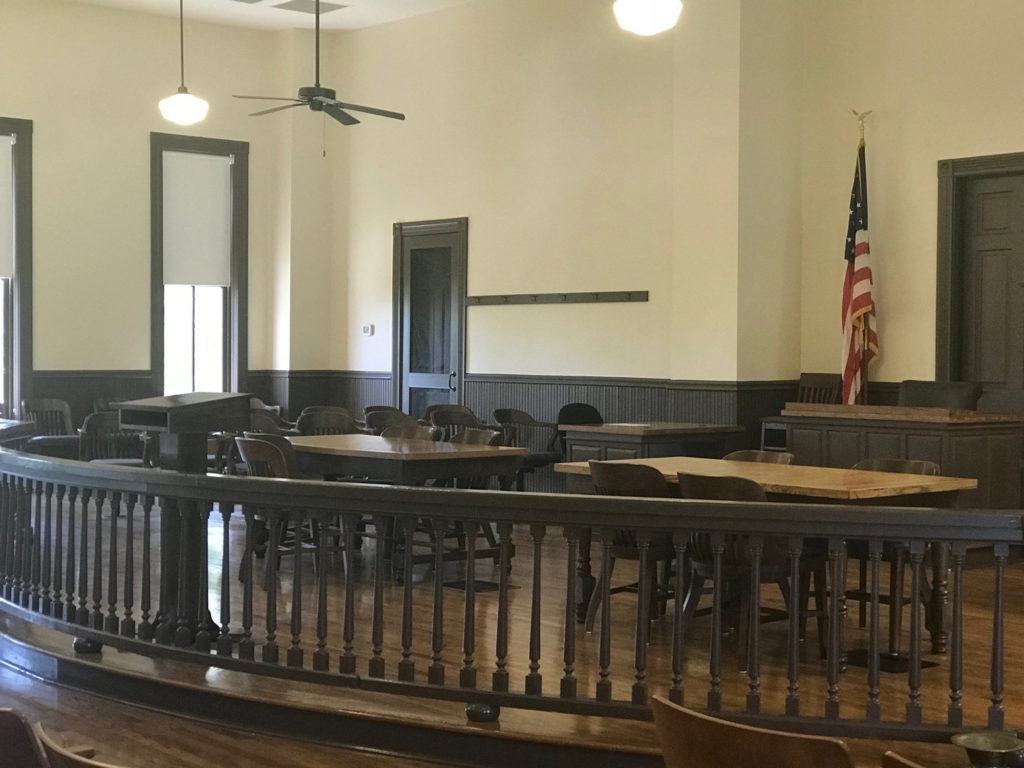 The restored courtroom where Emmett Till's murderers were acquitted. (Photo by Alexandra Watts/GroundTruth)

SUMNER, Mississippi — The courthouse where Emmett Till’s murderers were acquitted has been restored to look like it did during his 1956 trial, when his abduction, torture and murder shocked and shamed the nation.

It’s an unassuming and stately building. Rows of identical brown seats face the flags of Mississippi and the United States. Through the second floor windows, lush trees cast shade over the street below.

In July, the U.S. Department of Justice re-examined the case 63 years later “based upon the discovery of new information.” When I first heard the news, I drove over 70 miles to the courthouse. At the entrance to the building is an historic marker commemorating the trial of Till, a 14-year-old boy who came from Chicago to visit family in nearby Money, Mississippi. It was August 1955. After allegedly flirting with a white woman, he was kidnapped, tortured and murdered.

His assailants — the white woman’s husband and his half- brother — went to his family’s home and drove off with Till, taking him to a barn where he was tortured and murdered. His body was later found attached to a 74-pound cotton gin in the Tallahatchie River with his eye gouged out and his body unrecognizable.

Today the history of Till’s murder still shocks those who teach its lessons to future generations, and who try to explain how the murder and the gruesome open-casket photos of his disfigured body catalyzed the civil rights movement.

In July, a group of teachers came from across the United States to Sumner for an event with community members at the Emmett Till Interpretive Center across the street, and converged with a group of journalists  inside the courthouse on the day of the hearing. Among those gathered was Till’s cousin Wheeler Parker, who was there the night Till was kidnapped.

Parker is a preacher now, and regularly travels around the country speaking about his cousin. He is adamant about the dangers of holding hate or bitterness and is passionate about knowing history to understand the present and to build a better future.

“When you come here, it feels like you’re helping someone [and] giving them some tools they can go back in use in their schools, [or] their homelife, or their church… wherever they go,” Parker said after he spoke to the teachers. “So we’re here to serve, so I feel like I’m serving today.”

One of the teachers, a woman, went to take a photos of the sign memorializing Till and returned with a shocked look on her face.

She said that a woman in a truck had driven by and admonished her and her fellow teachers for taking photos and drawing attention to a case that was over, at least from the perspective of this passerby. For some visitors, it’s not over at all and the Till case is the first thing they think about, even if some residents seem eager to forget it.

Before I had started reporting in the Delta, I spoke with Patrick Weems, a co-founder of the center, about Till’s legacy and the work the center does with the community — a community still healing. In 2007, Tallahatchie County officially apologized to Till’s family.

The case had been reopened since 2004, but new information lead to the case being re-examined in July.

Inside the center, enlarged copies of newspaper articles from the time period adorn the walls. The black-and-white newsprint made me think about the media’s role in covering civil rights in the 1950s. Save for black-owned media outlets, most of the coverage was racist, problematic and false. The day I was in the courtroom, most of the “mainstream media” outlets featured people of color reporting, which shifted a change, but there was — and is — still a lot to think about.

At Till’s funeral, his mother, Mamie Till, wanted the casket open so the world could see what happened t0 her young son. Jet Magazine famously published an uncensored photo of Till in his casket.

Although the image of Till prevails, what happened the night he was kidnapped and murdered has yet to be completely determined. Even the more accurate stories about Till make mention of him provoking Carolyn Bryant, the wife of Roy Bryant, one of Till’s murderers.

Carolyn Bryant is why many believe the case was being re-examined. The Department of Justice never officially confirmed what sparked an ongoing investigation, but the re-examination coincided with recent information regarding Bryant recanting her story.

In a 2017, Timothy Tyson interviewed Bryant for his book The Blood of Emmett Till about her role in the case. In the book. Tyson writes that Bryant admitted she fabricated her initial testimony. The Department of Justice would not confirm it was that interview and book that sparked the investigations, but the author stated he handed over his materials to the FBI.

But according to The Clarion Ledger, Bryant’s daughter-in-law claims she never recanted. While Bryant’s admission is not on tape, Tyson maintains Bryant said it while he was not recording. The case is still open, and what new information has been found by the government has yet to be revealed.

Parker said he had long known Bryant was lying, but his recollections of Till had not been part of the narrative. Nobody bothered to ask him, he tells audiences now, about his account until decades after the case. Not only was he a relative of Till, but he was there during Till’s last days.

Even though Parker’s message in his presentations about the meaning of the murder of his cousin are about the larger questions of humanity and justice, what he said struck a chord with me on a journalistic level.

Knowing the history of a place is important for any journalist, but reporting in Mississippi has shown me just how essential knowing history is. I have learned that knowing history isn’t solely based on reading as many books as possible. Even the facts in history books can be wrong, and there are facts and observations I learned that can’t be found in books, but by having conversations and gathering as many perspectives as possible.

In working in the Delta, I find myself asking how many voices have been silenced and marginalized for years in press coverage and history books? At a time when local reporting is shrinking, I was also afraid of the voices in Mississippi that might not be heard in the future.

Till’s case is ongoing and the coverage will be, too. But before, during and after the his case, there are other issues regarding poverty, education and health in the Mississippi Delta that must be reported on. Realizing history’s implications in the present is one way to keep the public informed about the past.

Reporting and speaking to as many people as possible is important in any and all communities no matter what size. The Till story is a huge case that happened in a small town — a small town underreported and filled with stories.

Till’s case will continue to be in the public mind. Even after this story, Till was in the news when a sign commemorating his murder was vandalized for a third time with bullet holes only a few weeks after it was replaced. Miniseries and movies are scheduled to be released about the case, and Parker worries about future misconceptions the movies might perpetuate.

“His mama said, ‘I hope you didn’t die in vain.’ He lives because we’re here today.’” Parker said, but adds that he hopes that when the case is closed, Till’s name will be exonerated.

We are far from a post-racial society, but Mississippi and the United States have changed since 1956. I had long been familiar with Till’s story, but this summer, I left the courthouse with a new lesson in reporting.

When I told people I was moving to Mississippi to work as a local reporter, the response was less than enthusiastic, in no doubt because of the state’s history and reputation. But to be honest, Mississippi’s past is not keeping me away from the state. If anything, it makes me want to tell the stories of Mississippi that much more.