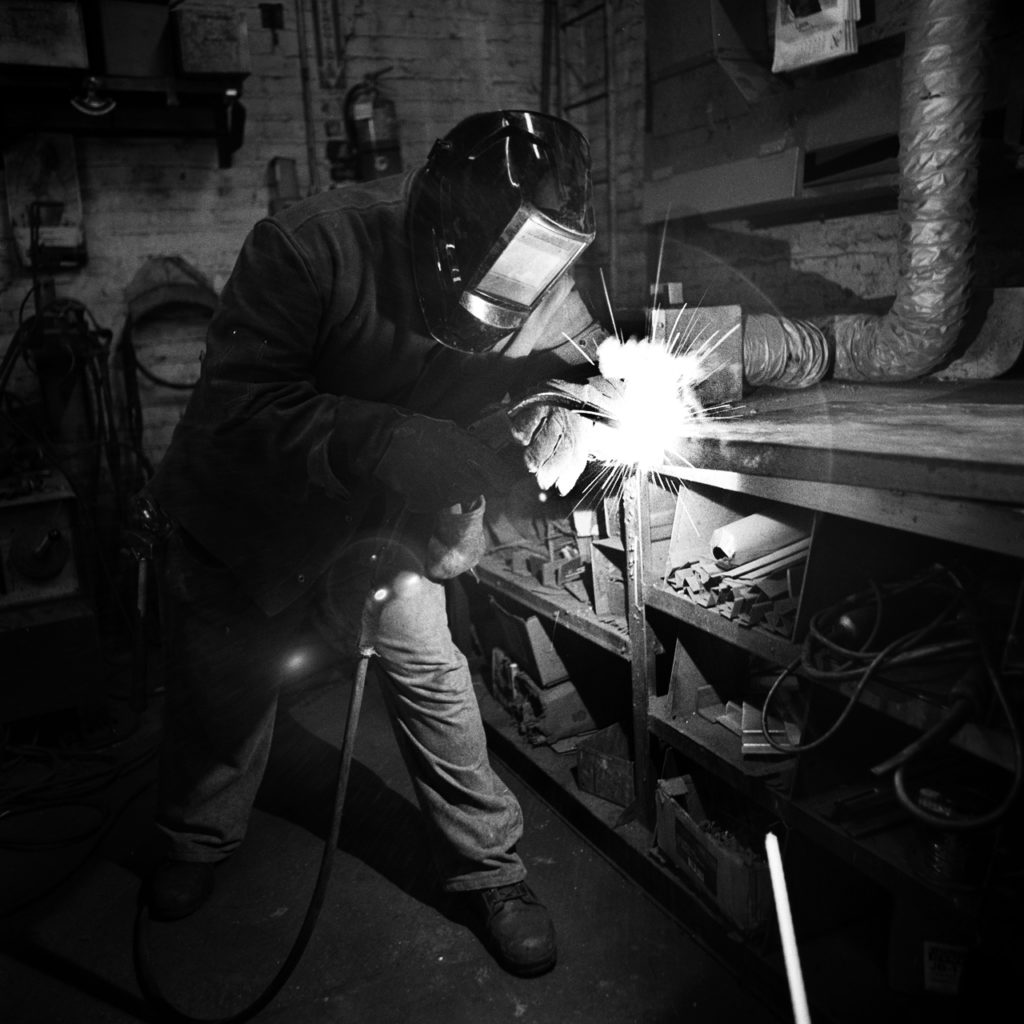 Derrick Green, from Gentlemen Sheet Metal, works at his welding station. A former IT worker, Derrick remembered the huge annual packets he had to fill out to prove to management his case for a raise. Today, he enjoys sitting back and letting his union, Local 28, fight for his prevailing wage. (Photo by Dakota Santiago/GroundTruth)

Seventy years ago, New York City was at its height in the days of a manufacturing economy. The city alone had more manufacturing jobs than Boston, Philadelphia, Chicago and Detroit combined. But mass production was not the city’s strong suit – the factories that occupied the city were mainly small-scale operations of just 20 to 40 employees hustling in warehouse spaces.

The Garment District on the west side of Manhattan, from 34th street to around 41st street, was one of the biggest suppliers of women’s fashion clothing. Three quarters of the nation’s output came from this square mile in the heart of Manhattan.

The end of World War II signaled the downfall of a blue-collar America. Industries such as maritime dock work and railroads – once one of the region’s largest employers – suffered the heaviest losses in the post war era. Manhattan docks that used to unload goods from across the globe shifted their operations to Newark, and railroads became overtaxed by the government and outclassed by the automobile. Automation and cheap labor were moved overseas and what’s left today – summarized in an editorial by the New York Daily News on November 9th, 2015 – are 90,000 manufacturing jobs. Down from what was, as Joshua B. Freeman counted a record 2.6 million-person workforce in 1946 in his book, “Working Class New York.”

This photo essay takes a look at the present state of this industrial landscape – to show the world that a complex, but functional web of industry still exists in New York. This essay peeks beyond the facade of the structures and show workers and their trades. It gives the viewer a glance at the variety of industry and puts a face on the men and women that ply these trades day in and day out.

These workers, not as numerous as they once were, still form the backbone of society in New York City. Beyond the shine of Manhattan’s skyscrapers, this little ecosystem of its own churns out production almost 24/7. They are the men and women that nobody sees, but everyone needs.

My work focuses on documenting working class issues ranging from the current manufacturing landscape to the worsening housing crisis brought on by hyper-gentrification in the New York City area. My interest in this work stems from a long family history of working in manual labor.

I’ve been surrounded by manual labor my entire life. My father was a delivery driver for over fifty years at the New York Daily News. My uncle, a roll-off truck driver for forty years at various sanitation companies. I myself have followed in my father’s trade at the printing plant for the ‘News for the past five years to get myself through college.