ProPublica’s Electionland, a sweeping reporting project for an historic election 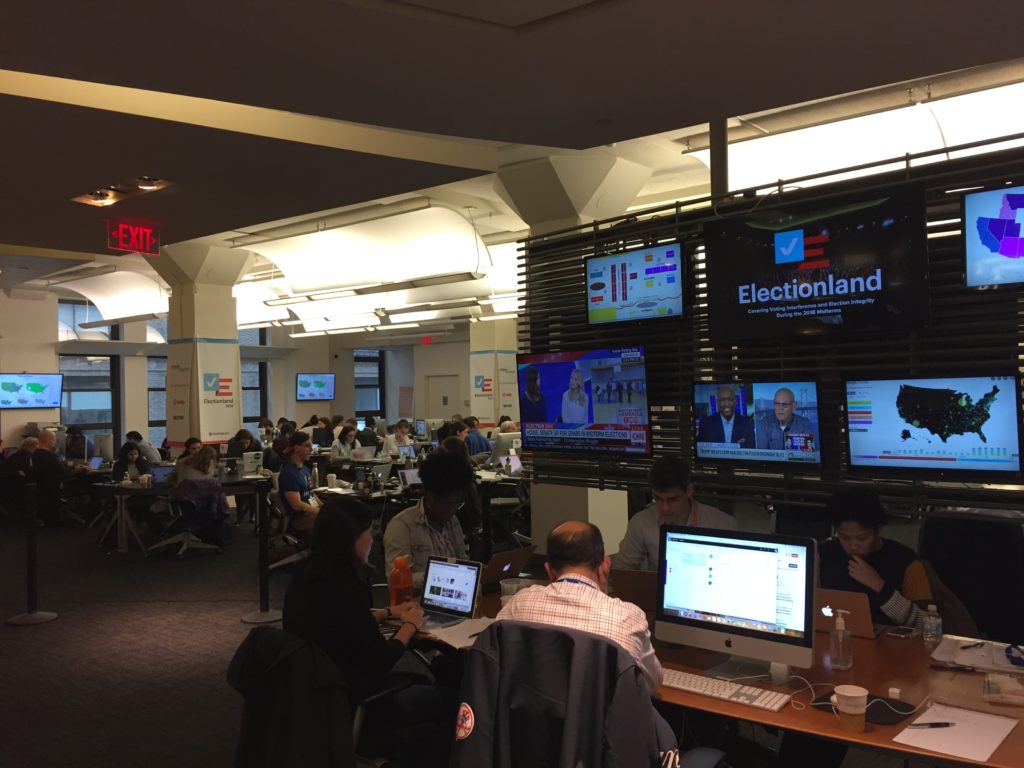 Electionland's newsroom at CUNY in New York on election night.

NEW YORK — When ProPublica’s Electionland project launched in 2016 to cover voting issues on Election Day, it was the largest journalistic collaboration in history with more than 1,000 journalists and technologists participating.

The project still counts 250 journalists from more than 125 newsrooms nationwide, but this year ProPublica decided to shift away from social-first strategy that had reporters scouring Twitter and Facebook for voter issues, instead starting with a secret weapon of sorts: a database maintained by the Lawyers’ Committee for Civil Rights Under Law, which receives tens of thousands of calls from voters across the country.

ProPublica journalists working in a packed but zen-like pop-up newsroom at the Craig Newmark Graduate School of Journalism at CUNY identify many of Electionland’s stories using the database, vetting them with a combination of old-fashioned reporting and social media verification, then packaging the concepts up to send to the local newsroom in best position to report out the story.

She explained that ProPublica realized the best model was to work with local newsrooms and help support them with extra resources and expertise.

“Ultimately, elections are a local issue,” she said. “I think that voting has become a hyper-partisan issue. But it’s an extremely complex beat.”

ProPublica’s is among a host of efforts focused on gaining municipal- and state-level reporting on this election. The GroundTruth Project has partnered with Google News Initiative and Society of Professional Journalists on a “Ground Truthing the Midterms” project that sent 60 reporters from 25 colleges and universities to polling places in 16 states.

While Electionland is a national initiative, by noon Tuesday it was clear that voter issues were cropping up in ProPublica’s own backyard.

Record turnout and humid weather, combined with oddly designed paper ballots that needed to be carefully torn into two pieces to be scanned, led to massive lines as scanners went down in Manhattan and the boroughs.

“Election administrators had to make guesses about how many machines they would need,” said ProPublica deputy managing editor Scott Klein. “Clearly they were low.”

As Electionland reported, New York City joined parts of Texas, Florida, Missouri, South Carolina and Pennsylvania as well as Chicago in keeping voters waiting at polling places for more than an hour.