In an election with religious undertones, Kerala’s Communists campaign on tolerance 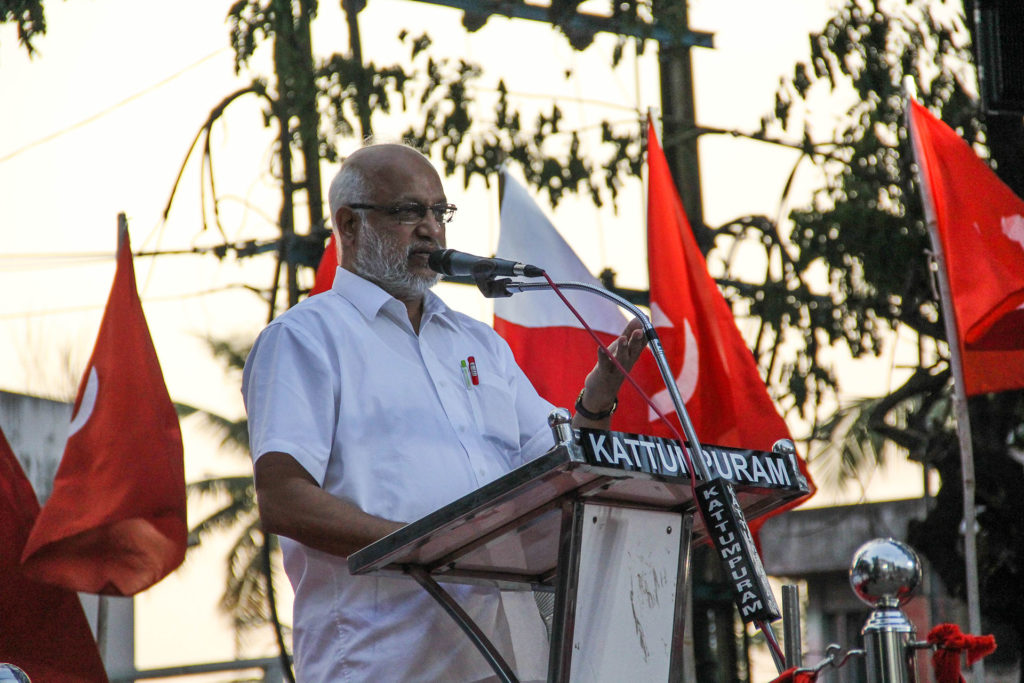 CPI(M) Polit Bureau member M. A. Baby speaks about the party's pro-labor platform at a town hall on March 11. (Photo by Diana Kruzman/GroundTruth)

KOCHI, India — On a sweltering March evening in India’s far south, as rows of red flags fluttered limply around a sea of red chairs, hundreds of people stood to watch Mariam Alexander Baby make his entrance.

Baby, who goes by “M.A.,” passed through the crowd to a stage adorned with a 10-foot picture of his face, and took his seat among several dozen other Communist Party leaders. Cars honked outside the gates of the Ernakulam Town Hall as people pressed against the fence’s bars, hoping to catch a glimpse of a political campaign in its infancy.

The day before, India’s Election Commission announced that elections for the lower house of parliament, the Lok Sabha, would begin in April. Baby, a Polit Bureau member of the state’s ruling Communist Party of India (Marxist), was there to promote his leftist coalition’s pro-labor platform in a district where the Congress Party-led UDF coalition has traditionally held sway.

But this year, the CPI(M) is also facing a challenge from a different direction — the Bharatiya Janata Party (BJP) of India’s Prime Minister Narendra Modi. In the run-up to the start of the elections in Kerala on April 23, the right-wing Hindu nationalist party stepped up its attacks against the state’s leftist leaders, accusing them of neglecting Kerala’s Hindu population to promote an atheist agenda.

In a state where only 0.3 percent of people officially lack a religious affiliation, according to the 2011 census, this sounds like a sticking point. But Baby, pausing for an interview after the end of his speech, soundly rejected the BJP’s attempts to portray his party as anti-religious.

“Rumors are wrongly propagated that we are against God,” Baby said, smiling in a grandfatherly way as he quoted his party’s philosophical founder: “In reality, Marx called religion the ‘heart of a heartless society.’”

As Baby pointed out, many members of the CPI(M) belong to one of Kerala’s many religious communities — Hindu, Christian, Muslim. And the party officially supports a secular government, one that does not take on a religious identity but protects the freedom of all religions.

But the BJP’s criticisms may be taking root in Kerala as the party looks to leverage a religious issue for political gain: the controversy over Sabarimala temple. Protests broke out late last year after India’s Supreme Court ruled that women of menstruating age should be allowed to enter the traditionally male-only religious complex. Many of these were led by Rashtriya Swayamsevak Sangh (RSS), a Hindu nationalist organization.

Religious leaders like Swami Chidananda Puri, a Keralan guru, have been particularly vocal in attacking the state’s openly atheist chief minister, Pinarayi Vijayan. Speaking in Los Angeles in February, Puri called his decision to uphold the Supreme Court’s order an “assault on Hindu customs.” In March, an RSS leader went a step further, offering 10 million rupees (around $140,000) to anyone who brought him Vijayan’s head — though he later expressed regret for the statement.

“Anti-Hindu forces are always doing atrocities against us… because of the scattered state of Hindu community,” Puri told the Los Angeles crowd. “Our will and our strength must be shown through ballot papers.”

With only 20 seats in Kerala up for election to the 545-seat lower house of parliament, the chances of the BJP getting a large enough percentage of the vote to win even one representative in the state is slim — and it has never been done before. The Election Commission has already warned India’s political parties against “weaponizing” the Sabarimala issue as a campaign point.

“The Sabarimala issue may help BJP win more votes than what they polled last time,” political scientist J. Prabhash told the Times of India. “Whether the surge in vote share will help them win a seat or two is the core question.”

But even if such rhetoric is used, Baby believes voters will not be swayed. He insists that the Keralan government is working to support the religious interests of Hindus.

“The LDF is helping believers go to Sabarimala,” Baby said, referring to the coalition his party leads. “We are trying to help the temple to prosper.”

Many Hindus in Kerala seem to agree. Hindu voters, particularly members of lower castes, played a large role in electing Vijayan’s party to run the state government in 2016. And those like P.K. Radeesh, a 57-year-old butcher stall manager, are not convinced by the BJP’s warnings about the CPI(M)’s atheist agenda.

“I’m a believer. I go to the temple,” Radeesh said through a translator. “But the Communist Party is about freedom. Communists respect religion and believing is a choice.”

The CPI(M) is not taking the votes of people like Radeesh for granted. The BJP gained one seat in the state legislature in 2016, and the race to win the favor of the state’s Hindu voters this year is on. P. Rajeev has already visited temples, churches and other religious organizations in his short time as a candidate, the Deccan Chronicle reported.

Despite these overtures, the party’s leaders don’t plan on playing identity politics. Asked about his own religious beliefs, M.A. Baby referenced Mahatma Gandhi: “Work is worship.”