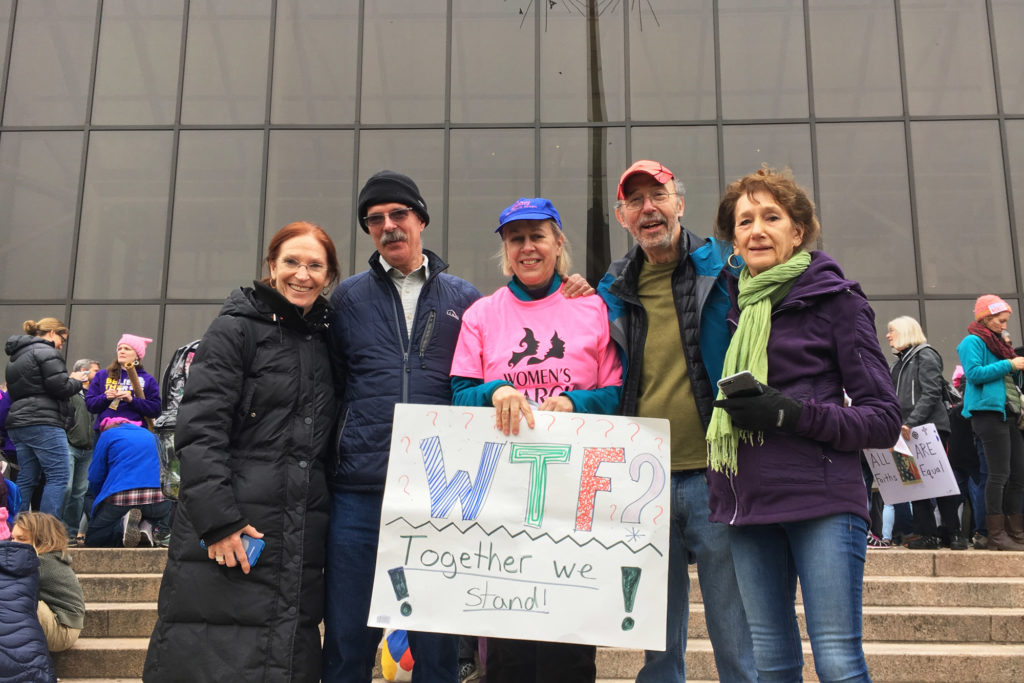 Anna Fierst, the great-granddaughter of Eleanor Roosevelt (center), holds up a sign that says, "Together We Stand." (Photo by Beth Murphy/GroundTruth)

Anna Fierst, 61, woke up early Saturday in Washington, D.C. with a fire in her chest – the intensity of which she hadn’t felt in years. Unlike the countless other times, this one had a particularly weighty duty attached: to hand down what she learned during a lifetime of protests to younger generations.

“Because now,” she said while eating breakfast at the Women’s National Democratic Club, “I see that same fire burning in them.”

It was only 7:30 a.m., and already the streets of Washington D.C were filling with three generations of angst, ambition, and aspiration — all people who, like Fierst, wanted to protest President Donald J. Trump and his agenda.

“I am in awe,” Fierst gasped, as she made her way from New Hampshire Avenue to secure a spot to watch the speeches near the National Air and Space Museum.  Joining her for the Women’s March were here 24-year-old daughter, Sophie, and more than 500,000 others –one of the largest demonstrations in American history.

“We used to do this all the time,” she said, watching the National Mall swell with handmade signs of heartbreak and hope. “In our family we’ve always known the importance of bringing our daughters along because the work is never done.”

Fierst was born Anna Eleanor, the great-granddaughter of Franklin and Eleanor Roosevelt.  The Women’s March and the “low level rage” she said inspired it are reminders of one of her great-grandmothers most famous quotes:  “A woman is like a tea bag; you never know how strong it is until it’s in hot water.”

The show of strength at this weekend’s march is exactly what Fierst and mothers, daughters, grandmothers, aunts said they wanted to experience with their daughters, mothers, grandchildren and nieces. And they did so across all ages, races and ethnicities to reveal how the consciousness-raising that’s happening today could make way for a far-reaching and united social justice movement.

“I see lessons happening across the generations,” said Ceci Hall who helped organize the 673 Sister Marches, the global solidarity events inspired by the Washington protest.  “I think young people are underestimated big time, and I’m seeing young people showing us how to get back to good old-fashioned connection. They realize the value of people connecting.”

Na’Dia Raines, 13, from Alexandria, Virginia, is one of those hyperconnected young people.

“It definitely makes me a lot more happy and a lot more at ease to know there are so many people who care about others,” she said as people scurried around her with signs reading   “Climate Change is Not a Chinese Hoax,” “Health Care Not Wealth Care,” and “Women/Black/Muslim/Latino/LGBTQ Lives Matter.”

Raines marched with her mom Jaeda, 39, who called the day one of the most important in their lives.

“I always try to lead by example with my daughter,” said Jaeda.  “I hope that she sees that her mom is willing to walk out the door, stand with the people, and make change. This is how change happens… she doesn’t have to sit quietly and let things happen to her. She can be the change she wants to see in the world.”

In that sense, the Women’s March was a real-world lesson in political participation and peaceful protest for tweens, teens and young adults.  For those in their 30s and 40s who were protesting for the first time, it was a wake up call to their own privilege.

“My mother was so upset by the results of the election.” says 49-year-old Inga Bruggeman. “I knew that sitting home and feeling powerless was not an option.”

Bruggeman came to D.C. from Reno, Nevada, meeting up with her 80-year-old mother and sister who traveled from Portland, Oregon. The Women’s March was the first time any of them had taken to the streets for political change.

Fierst says the civic unrest, disobedience and nonviolent protest that defined her young adulthood had fallen off the radar over the past two decades. She’s glad it’s making a comeback.

“In a perverse way, the Trump election is a good thing for getting people involved again,” she said. “There’s the realization that everything we’ve gained over the years could disappear if we don’t motivate ourselves to get out and keep fighting.”

Marchers had the sense, too, of not only making history but connecting to other historical movements – from the 1960s Civil Rights Movement to the 1913 Women’s Suffrage Parade that brought 8,000 women to the nation’s capitol on the day before Woodrow Wilson’s inauguration. That march was planned by 28-year-old Alice Paul.  Paul was inspired by her own mother, Tracie Paul, who spent her life fighting for women to have the right to vote.  Paul had a front row seat to the struggle as she accompanied her mother to meetings and witnessed the hard work it took to organize, strategize, and mobilize.

“Just as her 1913 march really put suffrage on the front page of the newspapers around the country,” says Lucienne Bear, Executive Director of the Alice Paul Institute, “this current activism is putting equality issues back in the limelight.”

A row of women dressed as suffragists, donning black top-hats and slim coats, stood outside the Capitol building with a banner bearing Susan B. Anthony’s words: “No self-respecting woman should wish or work for the success of a party that ignores her sex.”

“Sometimes,” Fierst says, “you get the most progress during the bleakest times because it wakes people up.”

There’s no sign that the people or the intersectionally amorphous — yet fierce –movement plan to rest.  According to a new report by the U.S. Institute of Peace, mass participation is part of what makes nonviolent movements so successful – especially when women are included.  The Women’s March had that in spades—with 3 million people estimated to have marched in nearly 700 cities around the world.  Organizers say those huge numbers are just part of the story.  The momentum won’t stop, they say, because of the deep connections that have been forged between and among organizations and activists.

“There are partnerships and alliances that have been built during the Women’s March planning,” says Sisters organizer Hall.  “Those partnerships are already being leveraged to get people plugged in at the community, state and national levels.”

This, she said, is the best way for people to channel their energy in the days and months after the March.

“The big question is what will happen tomorrow,” echoed 63-year-old Mary Cunningham, who left Philadelphia on a bus at 5:45 a.m. to meet her 36-year-old daughter, a diplomat temporarily living in D.C.

“It’s good to live in the moment, but we need to be thinking about tomorrow and the day after tomorrow,” her daughter added on the condition of anonymity; she works at the State Department, now tasked to carry out President Trump’s foreign policy in some of the most fragile corners of the world. “We can’t just stop at the end of the march. The end has to be the beginning.”

Thirteen-year-old Na’Dia and her mom Jaeda are prepared. They plan to work side by side with local organizations focused on equal rights in their hometown of Alexandria, Virginia.

“We need to let our voice be heard—not just today but everyday,” Jaeda said.  “And I think as much as I want my daughter to learn from me, I can learn from her, too.”