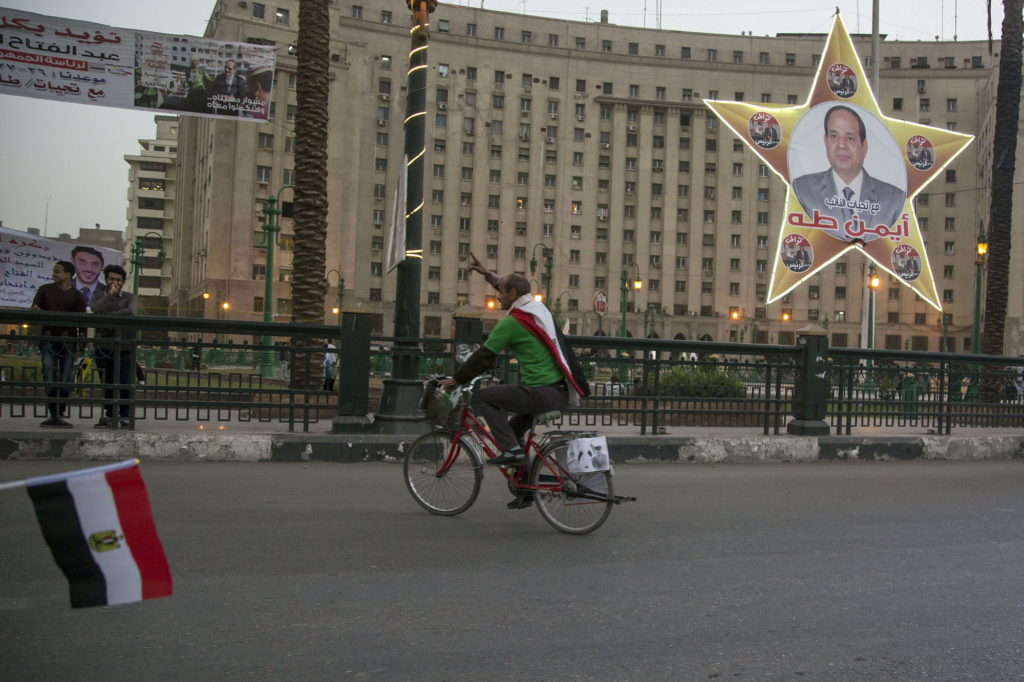 A supporter of Abdel Fattah el-Sisi campaigns for the president in Tahrir Square ahead of the election today. (Roger Anis/GroundTruth)

Every evening around 5:30 p.m. Ahmed Maher walks into his neighborhood police station at the edge of Cairo’s desert. He hands over his cellphone and urinates for the last time. Sometimes he shares small talk with the police officers, though he says they never look him in the eye. For the past two years, Maher has spent 12 of every 24 hours there, sleeping in a 250-square-foot, toilet-less cell with up to 17 other men.

At a minimum, he will spend another three years there, sleeping in a 13-square-foot space to which he’s laid claim. Such nighttime surveillance probation periods are common for criminals in Egypt, but this is the first time this kind of punishment has been used against a political prisoner like Maher.

“Over the past seven years since the revolution, time has moved very slowly,” Maher says in a Cairo office where he doesn’t believe he’s under surveillance. It’s one of the few spaces in the city that he doesn’t think is bugged.

“I’m losing so much time,” he says, reflecting on how his two young children always ask Maher to tuck them in at night. “I’m a walking prisoner.”

It wasn’t long ago when just about everyone in Egypt seemed to be on a revolutionary high, and everyone wanted a piece of Maher. He was one of the founding fathers of the civil disobedience that ultimately toppled Hosni Mubarak, the U.S.-backed president who presided over a police state for more than 30 years. International media couldn’t get enough. In Cairo, Maher couldn’t walk down the streets without cheers or photo requests. Now he walks down the street in a hat so as to avoid any recognition, which could lead to attack.

The country is almost unrecognizable since the days of what was then called the revolution. Egypt held its first-ever free and fair democratic elections in 2012. A year later, Mohammed Morsi, the Islamist president those elections brought to power was ousted in a military coup with popular support. The coup was led by Army Chief turned President Abdel Fattah el-Sisi. His rule has ushered in the same level of authoritarianism that led protestors to the streets in 2011.

This week, Egypt will hold a presidential election, but observers believe the process is a charade. The only viable opposition candidates have been jailed, deported or silenced. And the only other candidate on the ballot, Moussa Mostafa Moussa, is actually a backer of Sisi, has said he hopes the incumbent wins.

“The Sisi friendly media will hail his victory, but it will be a hollow one,” says Steven Cook, senior fellow at the Council on Foreign Relations. “Egypt is a profoundly repressive place, which is a reflection of the instability. As a result, Sisi is using the only tool at his disposal to try to bend the political arena to his will: force.”

To understand how Egypt backtracked to what many call an even grimmer place than in 2010, Maher’s story offers a somber roadmap.

From hope to a brutal crackdown

Maher was one of the unofficial leaders of the largely leaderless 2011 uprising that centered in Tahrir Square in Cairo and stunned the world when it forced Mubarak to finally step down after nearly thirty years in power. In 2008, Maher founded the April 6 Youth Movement as part of a textile workers’ strike in the Nile Delta, calling for democratic change and social and economic justice through creative non-violent protests and, at times, civil disobedience. The movement became one of the most  influential groups in the Tahrir uprising. It was nominated for a Nobel Peace Prize in 2011 and Maher traveled the world, becoming a symbol of democracy and freedom in Egypt. A new era was hailed and anything and everything seemed possible.

Fast-forward seven years. A mere mention of April 6 can land someone in jail.

In 2013, the government banned the organization and designated it a terrorist group. Streets are festooned in countless campaign posters for Sisi. Revolutionaries and activists have fled the country. Those who remain are either jailed or muzzled. History has been revised and rewritten with blood, and in many cases, completely erased. Foreign NGOs like Amnesty International and Human Rights Watch have been kicked out. The young were meant to inherit the revolution, but it instead devoured them.

In January 2016, Maher was released from prison after serving a three-year sentence for attending a protest in defiance of a law banning public gatherings not pre-authorized by the Interior Ministry. He spent almost all three years sealed in a small cell in solitary-confinement in Egypt’s notorious Tora Prison.

Maher was convicted along with prominent activists and cofounders of the movement Mohammed Adel and Ahmed Douma. Each was fined and sentenced to three years in prison. Adel’s sentence ended last year, but Douma is serving a life sentence in another case. A request for his appeal was denied last spring.

“This isn’t what we fought for,” says Douma’s wife, Nourhan. She’s given 20 minutes every other week to talk with her husband, as guards stand close by.

“A lot has changed, but nothing has really changed,” says Ahmed’s mother Fathia, who often accompanies her daughter-in-law on visits to Tora. Fathia is no stranger to the desert road that leads to the prison. Decades ago, she would make the journey to visit her father and most of her male relatives who were arrested for being being members of the then-banned Muslim Brotherhood. The organization, whose political party was briefly in charge of Egypt’s government following Morsi’s ascent to the presidency, has once again been banned.

“Everyone is suddenly a ‘terrorist,’” says Fathia, almost out of breath. The family refuses to talk on the record about Ahmed’s father, who is still in Egypt. “Your son, your husband, the man who sells fruit down the street. If you don’t go with [the government], you’re considered an outlaw.”

The government views both Islamists and “liberal” revolutionaries as terrorists, capable of destabilizing the country and working hand in hand with the Islamic State, against whom Sisi has announced a total war. U.S. President Donald Trump has promised Sisi unbridled support toward that end, overlooking human rights abuses.

Little sympathy for the protesters

Meanwhile, Amnesty International and other human-rights groups have called Sisi’s crackdown unprecedented. Security forces have accused the Brotherhood of coordinating with far more radical Islamist groups that have killed hundreds of police and soldiers in the Sinai Peninsula, including one that pledged allegiance to the Islamic State in 2014. The Brotherhood denies any affiliation.

“We protested against a dictator, only to have another one rise from his ashes and this time more evil,” says Nour, a 27-year-old Muslim Brotherhood supporter who now lives in Istanbul where he is joined by thousands of exiled members. “They can call us terrorists all the want, but they know they’re the real ones.”

A protest law passed in November 2013 has become, as Amnesty International describes it, “a fast track” to prison. It’s the reason Maher is behind bars half of his days. But sympathy is hard to come by in the new old Egypt.

At the height of the revolution when speaking against the uprising was almost as dangerous as it now is to criticize Sisi, Abdel Moneim Said, then chairman of Al Ahram, Egypt’s most widely circulating Egyptian daily newspaper, said that history would judge Mubarak differently and that the revolutionaries would end up in the dustbin of history.

Now, Said says he was right.

“Mubarak has been rightfully vindicated,” he says, noting that if Mubarak were to run for president this week, he’d likely win. As for the activists, they’ve sealed their own fate.

“History will judge them even more. Some are judging themselves by their actions. They came, they turned the country upside down and didn’t tell the country what they really wanted to do. They almost ruined it…can you give me one single idea they gave for the building of Egypt? They just wanted to demonstrate,” he said. “Sisi is restoring much-needed order. It’s absolute nonsense for people to say he’s autocratic.”

‘The spirit of the revolution is still alive’

Mahinour el-Masry, a human rights lawyer and notable activist, admits revolutionaries like herself could have done a better job engaging her fellow citizens.

“The problem is that with the revolution, we were isolated and we weren’t clear and engaged with the people,” she said, after we were forced to move locations with Maher due to suspicion of surveillance. In a flash, yet another downtown cafe frequented by activists had become a no-go zone.

El-Masry was released in November after serving three years in prison for illegally protesting. She has also previously served time, as Maher did, for joining protests in solidarity with Khaled Said, whose brutal 2001 death while in state custody helped spark the 2011 uprising.

“The spirit of the revolution is still alive, “ she said. “They can never take it away, but we will have to work harder. This chapter isn’t over.”

Maher agrees, but his nighttime detainment has robbed him of any functional life. He can’t travel outside of Cairo. Nor can he find a job in civil engineering, his profession. Few people or organizations want to be associated with him.

Last year, in an attempt to participate in civil society, he ran for a seat on the council of Egypt’s Engineering Syndicate and lost. But his mere participation was enough for many activists.

“It was like saying ‘You can’t break us,’” says el-Masry. “It’s one of the hardest times and Ahmed has paid a huge price on his life and family’s life, but he’s not broken. He can still fight. He still believes that the Egyptian people deserve a better future.”

Just after presidential elections four years ago — which Sisi swept with a low voter turnout — Maher penned an op-ed for The Washington Post from Tora Prison.

Now, the only sure path that Maher walks is to his 13-square-foot portion of a jail cell every evening.

“No one knows what the future holds,” he says, checking the time. It’s nearing 4 p.m. and he knows he should start making his way home. “I cannot say if it will be worse or better, but I don’t think it will be better.”

Maher says his children, Meral, 10, and Nidal, 7, understand the situation. At first he and his wife, Reham, hid the news from them. When the family visited Maher  the first year in prison, they lied and said he was working at Tora. But then his daughter heard from friends at school about his case and saw her father on TV.

“Sometimes they ask me how to change politics and make Egypt better,” Maher says, his eyes welling.

“Sometimes I try to explain. I just say, ‘In the future, when you become older, you can try to make things better. We tried and we failed,’” he says, crying. “But you will try again.”