Egyptian-American alliance to advise US leaders on ‘new Egypt’ 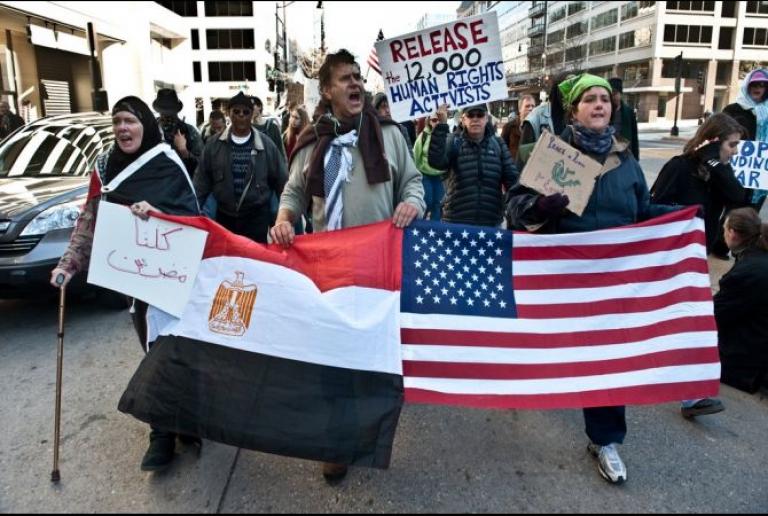 When millions of Egyptians rose up against Hosni Mubarak one year ago today — January 25, 2011 — their Egyptian-American kin hardly knew what to do with themselves.

“There was a sense of frustration among Egyptian-Americans,” said Heidi Abbass, a third-year law student from California. “The question was, ‘How can we help?’”

One year later, the revolutionary spirit is flagging and for the first time in decades the longstanding relationship between the US and Egypt is in serious flux. Abbass has joined a diverse team of like-minded members in creating the American Egyptian Strategic Alliance (AESA) to advise US officials on policy with Egypt as the balance of power shifts in the fledgling democracy.

The group recently registered as a social welfare organization in Washington, D.C. with 501(c)(4) tax-exempt status and is now piecing together its leadership.

AESA’s transitional board members say it’s the first time that Egyptian-Americans have ever organized themselves politically, inspired by a clarion call from their homeland and driven by concern that the US Congress and Obama administration have yet to figure out how to address an ‘Egyptian awakening.’

“I don’t think they know how to deal with the new realities,” said Kais Menoufy, AESA’s new president and CEO of Delegata, a California-based technology consulting firm. “They are still looking for a new Mubarak to deal with.”

The US provided Egypt with more than $2 billion in annual aid throughout Mubarak’s 30-year reign, including $1.3 billion in military aid that analysts say enabled him to maintain his hold on power. Throughout that time, Mubarak attempted to suppress the political activities of the Islamist group Muslim Brotherhood and the fundamental Salafists, who persevered and won a combined 75 percent of the seats in Egypt’s recent parliamentary elections.

Many Americans — including a significant swath of Congress — and both Egyptian Coptic Christians and secular elites worldwide are skeptical and even fearful of Islamist groups taking power in Egypt. At the same time the vast majority of Egyptians are highly skeptical of American intentions in their country, combined with a popular disdain for the US alliance with Israel.

But the AESA’s small leadership team, led by Menoufy and including Randa Hudome, former adviser to President George W. Bush, contends that the new organization is uniquely qualified to bridge the gulf. In the coming weeks, the organization will hold its first board meeting and develop its outreach and fundraising plans.

“Our stand is simple, really,” Menoufy said. “We would like to help US leaders to understand the importance of a strong Egyptian infrastructure.”

He said the Mubarak regime long neglected Egypt’s education, health and public services sectors — just the social services that help produce strong and engaged citizens. Although the organization has yet to formalize its priorities for a new Egypt, Menoufy said he wants to see American aid directed to these services.

“If we start today, Egyptians in the street will start to trust us more,” he said. “Though we need to be very careful — there is a perception that anything coming from America is suspect.”

Egyptian public opinion about the US government remains abysmally low, with more than 80 percent of the country holding an unfavorable opinion according to the Pew Research Center.

Hudome, who for several years advised on legislation directing American aid to US allies in Middle East as counselor to former senator and energy secretary Spencer Abraham (R-MI), said she has built strong relationships with the key players in Egypt’s evolving power dynamic including the Supreme Council of the Armed Forces (SCAF) and the April 6 Youth Movement.

“I have a good ability to dialogue with both sides,” Hudome said, adding that she and her AESA colleagues have both a strong understanding of Egyptian sensibilities and a deep knowledge of how decisions are made in American government and commerce.

In July 2011, Hudome said, she was alerted that the Egyptian government had taken major issue with American NGOs that were operating in Egypt without the required license.

“It was apparent that this is an extremely sensitive issue,” Hudome said. “My approach was to go to SCAF and ask, ‘Can I help?’”

Hudome said she also wrote a memo warning “anyone who would listen at the highest levels of government” that the NGO issue was a dangerous one, but the warning went unheeded. In December, the Egyptian military raided and closed several pro-democracy NGOs with US ties.

Although Menoufy was quoted railing against US military aid to SCAF in December, he said that his position was misrepresented and both he and Hudome said the US must work with the Egyptian military as long as the deeply rooted body holds significant power.

“If we’re not listening to each other, then things are going to get worse,” Hudome said.

She praised SCAF for preventing what could have been a much bloodier slaughter in the early days of the revolution, and asserted that a continued American relationship with the Egyptian military is both important and inevitable.

“I can’t say we’re going to redirect all the US aid money from the military to Egyptian citizens,” Hudome said. “I wish I could say that, but I can’t.”

But there is still a strong sense of optimism among the AESA’s founding members, particularly about the youth of Egypt who sparked the country’s uprising. The group has pledged to include revolutionaries in its leadership and to stay in touch with activists who continue to call for SCAF to rescind power as they struggle to build sustainable political organizations.

“I’m impressed with their heart, their thinking, their vision,” Menoufy said. “We should give them every chance. We should let them lead.”