On the edge of history, the world waits for a climate deal 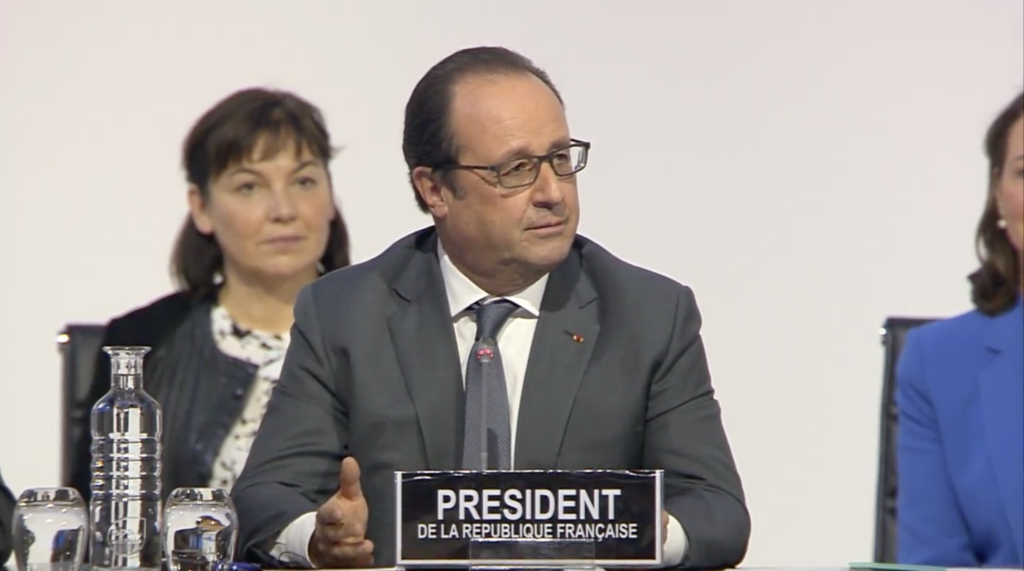 LE BOURGET, France – On the final day of the United Nations climate conference, COP 21,  some 25,000 delegates from around the world met to finalize what would be the world’s most far-reaching deal ever on global warming.

A 31-page final draft of the document was published Saturday afternoon, setting off eleventh hour wrangling over the text which seeks to cap temperature rises to under two degrees Celsius (3.6 degrees F.) from pre-industrial levels, and to have the most developed countries assist poorer nations in adapting to the impacts of a warming planet.

In an impassioned speech on the fourteenth day of the conference, French President François Hollande called upon the delegates to ratify an agreement that would make history.

“History is coming, in fact, history is here,” Hollande said. “It is rare to have the opportunity in a lifetime to change the world…Seize it so that the planet can live on, so that humanity can live on.”

After nearly two weeks of round-the-clock dealmaking behind closed doors, the UN published the agreement, aspects of which are legally binding and which, if ratified, would pull the world’s governments together to live up to unprecedented commitments to cut carbon emissions.

At the core of the proposed agreement was a recognition by all 196 parties that climate change represents “an urgent and potentially irreversible threat to human societies and the planet,” as stated in the preamble. Delegates will vote on the deal after a final plenary session, as soon as Saturday evening.

Many environmental and human rights groups inside the conference and demonstrators out on the streets of Paris were less enthusiastic about the final text than the delegates who negotiated it, still believing that the rich countries got the better end of the deal.

“The major powers have come together but the poorest have been shortchanged. This is but a fragile lifeline for the most vulnerable,” said Tim Gore, head of policy advocacy and research of Oxfam International. “We are seeing something like a global power shift in climate action, some of the most ambitious pledges put on the table coming into Paris were from developing countries.”

After the document came out, Azeb Girmai, an Ethiopian activist from the Least Developed Countries’ Watch International, a campaign group representing the poorest countries, said the document did not include sufficient compensation for poor nations hard-hit by the pollution that has largely come from the rich world.

“Today I would say is the saddest day for all the vulnerable people in the world,” she said. Negotiations were done behind closed doors and “victims were coerced, bullied by rich countries without any support from outside, and they have failed.”

Still, other environmental groups were optimistic about the agreement and the progress it illustrated after 21 years of annual UN gatherings known as Conference of the Parties, or COP.

Indeed, many environmentalists saw the document produced by COP21 as transformative since it has embedded in it a long-term goal of moving toward a “deep reduction” in global carbon emissions through offsets and clean energy.

“When we arrived here two weeks ago we were cautiously optimistic but there were huge challenges,” said Bert Wander of the global activist group Avaaz, which has organized an array of public demonstrations around the world to highlight the need for an ambitious agreement. “This is a really key moment and people will remember this moment for a long time to come.”