Drone violence along Armenian-Azerbaijani border could lead to war 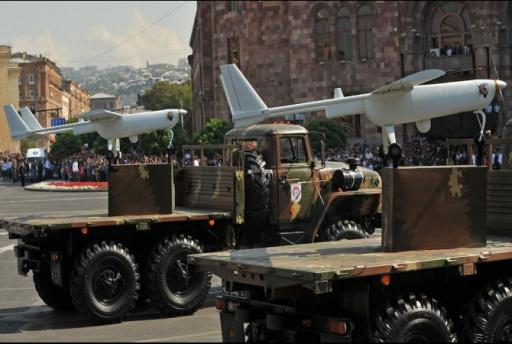 Armenian-built drones atop their launchers roll during a military parade in 2011. Armenia and Azerbaijan are both flexing their military muscles, flying drones over the border between them and fueling worries that the exercises could lead to all-out war. - (Karen Minasyan / AFP / Getty Images)

YEREVAN, Armenia — In a region where a fragile peace holds over three frozen conflicts, the nations of the South Caucasus are buzzing with drones they use to probe one another’s defenses and spy on disputed territories.

The region is also host to strategic oil and gas pipelines and a tangled web of alliances and precious resources that observers say threaten to quickly escalate the border skirmishes and airspace violations to a wider regional conflict triggered by Armenia and Azerbaijan that could potentially pull in Israel, Russia and Iran.

To some extent, these countries are already being pulled towards conflict. Last September, Armenia shot down an Israeli-made Azerbaijani drone over Nagorno-Karabakh and the government claims that drones have been spotted ahead of recent incursions by Azerbaijani troops into Armenian-held territory.

Richard Giragosian, director of the Regional Studies Center in Yerevan, said in a briefing that attacks this summer showed that Azerbaijan is eager to “play with its new toys” and its forces showed “impressive tactical and operational improvement.”

The International Crisis Group warned that as the tit-for-tat incidents become more deadly, “there is a growing risk that the increasing frontline tensions could lead to an accidental war.”

With this in mind, the UN and the Organization for Security and Co-operation in Europe (OSCE) have long imposed a non-binding arms embargo on both countries, and both are under a de facto arms ban from the United States. But, according to the Stockholm International Peace Research Institute (SIPRI), this has not stopped Israel and Russia from selling to them.

After fighting a bloody war in the early 1990s over the disputed territory of Nagorno-Karabakh, Armenia and Azerbaijan have been locked in a stalemate with an oft-violated ceasefire holding a tenuous peace between them.

And drones are the latest addition to the battlefield. In March, Azerbaijan signed a $1.6 billion arms deal with Israel, which consisted largely of advanced drones and an air defense system. Through this and other deals, Azerbaijan is currently amassing a squadron of over 100 drones from all three of Israel’s top defense manufacturers.

Intelligence gathering is just one use for drones, which are also used to spot targets for artillery, and, if armed, strike targets themselves.

Armenian and Azerbaijani forces routinely snipe and engage one another along the front, each typically blaming the other for violating the ceasefire. At least 60 people have been killed in ceasefire violations in the last two years, and the Brussels-based International Crisis Group claimed in a report published in February 2011 that the sporadic violence has claimed hundreds of lives.

“Each (Armenia and Azerbaijan) is apparently using the clashes and the threat of a new war to pressure its opponent at the negotiations table, while also preparing for the possibility of a full-scale conflict in the event of a complete breakdown in the peace talks,” the report said.

Alexander Iskandaryan, director of the Caucasus Institute in the Armenian capital, Yerevan, said that the arms buildup on both sides makes the situation more dangerous but also said that the clashes are calculated actions, with higher death tolls becoming a negotiating tactic.

“This isn’t Somalia or Afghanistan. These aren’t independent units. The Armenian, Azerbaijani and Karabakh armed forces have a rigid chain of command so it’s not a question of a sergeant or a lieutenant randomly giving the order to open fire. These are absolutely synchronized political attacks,” Iskandaryan said.

The deadliest recent uptick in violence along the Armenian-Azerbaijani border and the line of contact around Karabakh came in early June as US Secretary of State Hillary Clinton was on a visit to the region. While death tolls varied, at least two dozen soldiers were killed or wounded in a series of shootouts along the front.

The year before, at least four Armenian soldiers were killed in an alleged border incursion by Azerbaijani troops one day after a peace summit between the Armenian, Azerbaijani and Russian presidents in St. Petersburg, Russia.

“No one slept for two or three days [during the June skirmishes],” said Grush Agbaryan, the mayor of the border village of Voskepar for a total of 27 years off and on over the past three decades. “Everyone is now saying that the war is coming. We know that it could start at any moment.”

Azerbaijan refused to issue accreditation to GlobalPost’s correspondent to enter the country to report on the shootings and Azerbaijan’s military modernization.

Flush with cash from energy exports, Azerbaijan has increased its annual defense budget from an estimated $160 million in 2003 to $3.6 billion in 2012. SIPRI said in a report that largely as a result of its blockbuster drone deal with Israel, Azerbaijan’s defense budget jumped 88 percent this year — the biggest military spending increase in the world.

Israel has long used arms deals to gain strategic leverage over its rivals in the region. Although difficult to confirm, many security analysts believe Israel’s deals with Russia have played heavily into Moscow’s suspension of a series of contracts with Iran and Syria that would have provided them with more advanced air defense systems and fighter jets.

Stephen Blank, a research professor at the United States Army War College, said that preventing arms supplies to Syria and Iran — particularly Russian S-300 air defense systems — has been among Israel’s top goals with the deals.

In Azerbaijan in particular, Israel has traded its highly demanded drone technology for intelligence arrangements and covert footholds against Iran. In a January 2009 US diplomatic cable released by WikiLeaks, a US diplomat reported that in a closed-door conversation, Azerbaijani President Ilham Aliyev compared his country’s relationship with Israel to an iceberg — nine-tenths of it is below the surface.

Although the Jewish state and Azerbaijan, a conservative Muslim country, may seem like an odd couple, the cable asserts, “Each country finds it easy to identify with the other’s geopolitical difficulties, and both rank Iran as an existential security threat.” Quarrels between Azerbaijan and Iran run the gamut of territorial, religious and geo-political disputes and Tehran has repeatedly threatened to “destroy” the country over its support for secular governance and NATO integration.

In the end, “Israel’s main goal is to preserve Azerbaijan as an ally against Iran, a platform for reconnaissance of that country and as a market for military hardware,” the diplomatic cable reads.

But, while these ties had indeed remained below the surface for most of the past decade, a series of leaks this year exposed the extent of their cooperation as Israel ramped up its covert war with the Islamic Republic.

In February, the Times of London quoted a source the publication said was an active Mossad agent in Azerbaijan as saying the country was “ground zero for intelligence work.” This came amid accusations from Tehran that Azerbaijan had aided Israeli agents in assassinating an Iranian nuclear scientist in January. Then, just as Baku had begun to cool tensions with the Islamic Republic, Foreign Policy magazine published an article citing Washington intelligence officials who claimed that Israel had signed agreements to use Azerbaijani airfields as a part of a potential bombing campaign against Iran’s nuclear sites.

Baku strongly denied the claims, but in September, Azerbaijani officials and military sources told Reuters that the country would figure in Israel’s contingencies for a potential attack against Iran.

“Israel has a problem in that if it is going to bomb Iran, its nuclear sites, it lacks refueling,” Rasim Musabayov, a member of the Azerbiajani parliamentary foreign relations committee told Reuters. “I think their plan includes some use of Azerbaijan access. We have (bases) fully equipped with modern navigation, anti-aircraft defenses and personnel trained by Americans and if necessary they can be used without any preparations.”

He went on to say that the drones Israel sold to Azerbaijan allow it to “indirectly watch what’s happening in Iran.”

According to SIPRI, Azerbaijan had acquired about 30 drones from Israeli firms Aeronautics Ltd. and Elbit Systems by the end of 2011, including at least 25 medium-sized Hermes-450 and Aerostar drones.

In October 2011, Azerbaijan signed a deal to license and domestically produce an additional 60 Aerostar and Orbiter 2M drones. Its most recent purchase from Israel Aeronautics Industries (IAI) in March reportedly included 10 high altitude Heron-TP drones — the most advanced Israeli drone in service — according to Oxford Analytica.

Collectively, these purchases have netted Azerbaijan 50 or more drones that are similar in class, size and capabilities to American Predator and Reaper-type drones, which are the workhorses of the United States’ campaign of drone strikes in Pakistan and Yemen.

Although Israel may have sold the drones to Azerbaijan with Iran in mind, Baku has said publicly that it intends to use its new hardware to retake territory it lost to Armenia. So far, Azerbaijan’s drone fleet is not armed, but industry experts say the models it employs could carry munitions and be programmed to strike targets.

Drones are a tempting tool to use in frozen conflicts, because, while their presence raises tensions, international law remains vague at best on the legality of using them. In 2008, several Georgian drones were shot down over its rebel region of Abkhazia. A UN investigation found that at least one of the drones was downed by a fighter jet from Russia, which maintained a peacekeeping presence in the territory. While it was ruled that Russia violated the terms of the ceasefire by entering aircraft into the conflict zone, Georgia also violated the ceasefire for sending the drone on a “military operation” into the conflict zone.

The incident spiked tensions between Russia and Georgia, both of which saw it as evidence the other was preparing to attack. Three months later, they fought a brief, but destructive war that killed hundreds.

The legality of drones in Nagorno-Karabakh is even less clear because the conflict was stopped in 1994 by a simple ceasefire that halted hostilities but did not stipulate a withdrawal of military forces from the area. Furthermore, analysts believe that all-out war between Armenia and Azerbaijan would be longer and more difficult to contain than the five-day Russian-Georgian conflict.

While Russia was able to quickly rout the Georgian army with a much superior force, analysts say that Armenia and Azerbaijan are much more evenly matched and therefore the conflict would be prolonged and costly in lives and resources.

Blank said that renewed war would be “a very catastrophic event” with “a recipe for a very quick escalation to the international level.” Armenia is militarily allied with Russia and hosts a base of 5,000 Russian troops on its territory. After the summer’s border clashes, Russia announced it was stepping up its patrols of Armenian airspace by 20 percent.

Iran also supports Armenia and has important business ties in the country, which analysts say Tehran uses as a “proxy” to circumvent international sanctions.

Blank said Israel has made a risky move by supplying Azerbaijan with drones and other high tech equipment, given the tenuous balance of power between the heavily fortified Armenian positions and the more numerous and technologically superior Azerbaijani forces. If ignited, he said, “[an Armenian-Azerbaijani war] will not be small. That’s the one thing I’m sure of.”