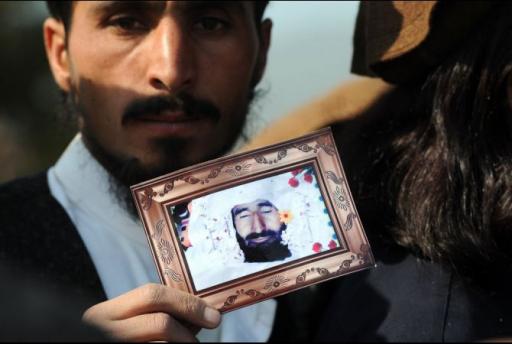 WASHINGTON — A case that pits US government policy on drone strikes in Pakistan against the body of international law is set in the besieged Northwest Frontier Province, where Noor Khan is the plaintiff in a lawsuit on behalf of his father who was killed along with more than 40 others while leading a tribal council.

Was this father, Daud Khan, and the other civilians’ deaths ‘extrajudicial murder’ or ‘justified collateral damage’ in war? The question speaks to two starkly different legal conclusions and a fork in the road of international law when it comes to the use of drones, particularly amid the Obama administration’s expanded use of Unmanned Aerial Vehicles, or UAVs.

The drone attack in question — on March 17, 2011 — killed 42 people. Four were confirmed Pakistani Taliban members and the rest were reportedly civilians, including tribal elders such as Khan’s father who were attending the tribal council, which was focused on a conflict over mining in Northern Waziristan.

The assembly, known as a ‘jirga,’ has deep tradition in Pashtun culture and in this instance was aimed at settling the land dispute before it turned violent. But the gathering ended when suspected CIA drones fired several missiles at the meeting place.

Khan’s family filed suit in the High Court of the Peshawar province against the government of Pakistan. Khan seeks redress in the form of action, asking the Pakistani government to pursue and criminally charge those involved with the strike, both inside and outside the country. He is arguing that the government failed in its legal duty to protect the life and liberty of its citizens, per Article 9 of the Pakistani Constitution.

The case currently awaits a final judgment and faces several hurdles, with the next hearing scheduled for Oct. 23. Khan’s case is one of only a few petitions filed by a surviving relative over the killing of a civilian in an American drone attack and faces generally tenuous chances of success in a convoluted Pakistani legal system, a mix of of British common law and Islamic law divided into five jurisdictions, with higher and lower courts in each jurisdiction.

More importantly, the case will almost definitely fail to lay a finger on the United States government, the party ultimately responsible for the drone strike. Nevertheless, it is an apt lens through which to analyze great legal questions that extend beyond the case.

Until now, international law and conventions have addressed the traditional combat context of war: troops in uniform killing other troops in uniform. As modern military methods shift from conventional warfare to combating terrorism through targeted killings, how do these laws apply to the US killing a terrorist disguised as a civilian?

What crimes, if any, does the US commit when a soldier carries out the killing from a cubicle using a joystick to operate the predatory drone? The answers to these questions will largely determine whether or not individuals like Khan are left empty-handed by the law.

When the United States targets and kills civilians with drones, it is bound by both domestic and international law. US domestic laws pose their own set of legal questions, mainly regarding oversight of drone operations by Congress, the US military and the CIA. However, even assuming that the United States’ conduct is completely justifiable under its own laws, the country must still answer to international law which binds states under a neutral set of conduct rules.

“To my knowledge, there are no legal efforts underway to prosecute the US for the killings of civilians in its conflicts abroad. The debate in the US right now is over the issue of whether targeted killings are legal or not,” said Hina Shamsi of NYU Law School.

Khan, along with a human rights group, has also filed a case in the United Kingdom against the Foreign Secretary on the basis of his purported complicity in the US strikes in Waziristan. However this comparatively small number of legal cases has not stopped a colossal debate from ensuing over the general legality of drone killings.

Predatory drone strikes pose two fundamental legal questions. The first is a sovereign rights inquiry: When can one state invade a foreign state’s territory to kill an individual without the foreign state’s permission? This only affects state rights, in the case of the March 17 strike, Pakistan’s rights.

The more controversial second question is, irrespective of the sovereignty issue, when does a government have the right to use deadly force against an individual? The answer to the latter establishes victims’ rights and divides the international legal community. This question directly addresses whether Khan, an individual and son of a civilian drone victim, has a claim against the United States.

In general terms, killing an individual without trial is extrajudicial murder unless it qualifies as self-defense. However, during times of war, the so-called ‘rules of war’ are less restrictive and a state can use deadly force against enemy combatants. In the traditional war setting, combatants are easily identifiable as uniformed soldiers belonging to the enemy state.

The identification of a terrorist is much more complicated than that of an enemy combatant in a traditional war context. The jirga where Khan’s father died is a textbook instance of this complication: the meeting was a group of over nearly 50 people, some reportedly affiliated with the Taliban and the rest local elders, apparently coming together to settle a local administrative matter.

An enemy combatant joins the military, arms himself and bears a uniform during his service. Terrorists could be living civilian lives after their incriminating acts, or they might be active criminals disguised as civilians. In either case, killing a suspected terrorist with a drone almost inevitably involves civilian deaths.

What individual rights do the deceased targets and civilians have against the drone-striking country? It depends on the applicable set of international law: international human rights law or the laws of war. The choice of applicable law is determined by whether these targeted drone strikes are part of an armed conflict and this is precisely the issue that splits the legal community.

The United States has a clear stance: We are at war and the rules of war apply to drone strikes. Kenneth Anderson, professor of international law at Washington College of Law and a visiting fellow at the Hoover Institution, explains “[The United States] just says, and this is even more true of the Obama administration than the Bush administration, ‘This is an armed conflict.’ There is no daylight between all three branches of government on how to view this and it is viewed as an armed conflict.”

Under this interpretation of international law, the rules of war govern drone strikes, justifying the use of deadly force against targets and taking into account collateral damage, such as the tribal elders at the meeting where Khan’s father died. Furthermore, this view holds that enemy combatants are participants in the armed conflict wherever they go, so striking targets who are located in Pakistan is fair game under the rules of war.

Opponents take the stance that these strikes are not part of an armed conflict and the rules of war, thus, do not apply. The armed conflict claim is a legal fiction and the United States is cherry picking the legal framework that protects its conduct under the rules of war, thus doing indirectly what they cannot do directly under international human rights laws. Shamsi contends, “I think the key issue here is that the US is claiming that the laws of war apply in places where they absolutely do not apply.”

Contrary to the US stance, this interpretation holds that, regarding Anderson’s explanation, “There is no war going on in a legal sense, and if there is, it is strictly limited to hot battlefields of Afghanistan. [Drone strikes are] governed by standards of international human rights and domestic law, and therefore any killings that take place under the circumstances are not protected by the law of war and instead are just extrajudicial executions, and frankly murder.”

However, some have implied that the existence of only two black and white legal conclusions — all out combat or none at all — is unrealistic. Perhaps the legal community has painted itself into a corner of two extremes that do not account for what is in reality a grey area. The grey area is that predatory drones are part of modern armed conflicts, but the application of existing rules of war may be abused as a blanket license for indiscriminate drone strikes. A middle ground may exist in the form of mandating transparency from the government trying to use drones in armed conflicts.

British human rights lawyer Clive Stafford Smith, a proponent of this perspective, explains, “All I really want to see is an honest, open, and transparent discussion. I don’t want the American soldiers getting killed . . . but on the other hand the danger of having more systems that create no jeopardy is it makes it much easier for us as Americans to go around killing people . . . You know people always put two ridiculous alternatives there is always a third option, and in this case there are lots of options.”