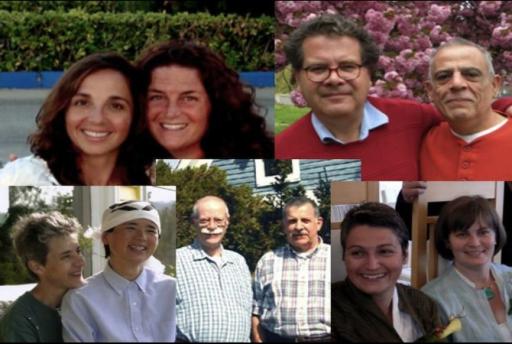 Santiago Ortiz and Pablo Garcia (top right) are one of five married, binational LGBT couples involved in a federal law suit against the Defense of Marriage Act through Immigration Equality, an advocacy organization devoted to fighting for immigrant rights for same-sex couples. - (Immigration Equality)

Pablo Garcia has been in the United States illegally since 1992, a year after he met the love of his life in his native Venezuela.

Ortiz was born in New York and is an American citizen, but the couple’s marriage has not afforded Garcia the same rights and liberties he would have access to if he and his partner were heterosexual. The Defense of Marriage Act (DOMA) precludes US citizens from petitioning for green cards on behalf of a same-sex spouse.

That means that Garcia cannot accompany Ortiz, who is HIV positive, when he travels abroad to receive treatment. And when Garcia’s father died in 1998, he couldn’t attend the funeral in Caracas for fear he wouldn’t be allowed reentry to the US.

In April, Immigration Equality, an advocacy group focused on seeking relief for same-sex households that are “binational” like Garcia and Ortiz, levied the first federal lawsuit on behalf of such couples as a challenge to Section 3 of DOMA.

Garcia and Ortiz are one of five married couples named in the complaint suing for equal protection and immigration rights, and the case their only hope to live together legally without fear of deportation until DOMA is overturned.

“We’ve been hiding out in clear view. It’s like we’re under the radar,” said Ortiz. Luckily for them, “New York is a city where you really get lost in the maze,” he said.

Now, Immigration Equality and their plaintiffs may be a little bit closer to winning their case, and over 36,000 households could be affected by a memo issued last week by the Department of Homeland Security (DHS) to the Immigration and Customs Enforcement agency (ICE).

DHS Secretary Janet Napolitano clarified in a new guidance to ICE on Friday that the government would no longer be prioritizing the deportation of illegal immigrants, specifically LGBT individuals, with strong family ties in the US.

The memo, released to the public on Tuesday, specifies that the idea of “family” also “encompasses two adults who are in a committed, long-term, same-sex relationship.”

“There is a light at the end of the tunnel now,” said Steve Ralls, Communications Director for Immigration Equality, about the guidance to ICE. “Things are certainly looking rosier.”

ICE Director John Morton advised agency personnel in a July 2011 memoon what to look for when considering deportation. In an effort to not waste resources, this guidance is to be applied by ICE officers and attorneys to a number of enforcement decisions that are made as an individual is moved through the system toward deportation. It instructs agents to take certain factors into consideration when making decisions and in a 19-point list of possible factors that could contribute to officers not moving toward further action, “family relationships” and “whether the person has a US citizen or permanent resident spouse, child, or parent” are clearly stated.

However, what was not clear was whether members of LGBT families were meant to be part of this consideration. After 84 members of Congress, including Minority Leader Nancy Pelosi and Rep. Jerrold Nadler (D-NY), wrote a letter to Napolitano demanding the administration’s policy on LGBT immigration rights be made more clear – in writing – the happy news was returned.

“In an effort to make clear the definition of the phrase ‘family relationships,’ I have directed ICE to disseminate written guidance to the field that the interpretation of the phrase ‘family relationships’ includes long-term, same-sex partners,” wrote Napolitano in a letterto those lawmakers last month. The Obama administration says this is a reinforcement of existing policy.

In response, Pelosi issued a statement saying more needed to be done, but that the written guidance will provide “clarity and confidence to families.” Nadler said that he was “thrilled,” according to the Washington Blade.

Immigration lawyers are similarly pleased with the guidance because it introduced the concept of “prosecutorial discretion,” which can move individuals out immediate danger of deportation if they possess some of these factors.

Edward Farwell, an associate immigration attorney with Joyce & Associates in Boston says he has an LGBT client whose case will likely be impacted by the memo and has been waiting to hear whether he will be allowed to be moved to a deferred action list for deportation.

“[My client] is now in a serious relationship and is actually considering marrying his partner. He was asking whether the marriage is relevant to the prosecutorial discretion, and the consideration factors – and it certainly is,” said Farwell.

The case against DOMA

While the directive certainly put a huge amount of people out of harm’s way, the only permanent solution for tens of thousands of binational couples is a path to citizenship and a green card – and that is not what either DHS or ICE is promising.

“[The announcement] is fantastic, and it will save some families from separation, but it is sort of an eleventh-hour reprieve,” said Ralls, who explained that it applies most to individuals who are very close to deportation, but doesn’t solve the big problems.

Immigration Equality receives hundreds of phone calls every year asking for help, said Ralls, and the organization decided to focus their first case on a specific part of the country (the Second Circuit, Eastern District). According to the complaint filed, “In each couple, one spouse is an American citizen and the other spouse is a foreign national.”

Although some LGBT couples are lucky and have either work or student visas that allow them to stay in the country, many couples are reliant on either tourist visas that require them to leave the country every six months (an obvious financial hardship), or temporary visas that run out and result in them living illegally, like Ortiz and Garcia.

Like the other plaintiffs in the case, Ortiz filed an I-130 form (a Petition for an Alien Relative) after their wedding, and received the message, “DOMA applies as a matter of federal law whether or not your marriage is recognized under state law. Your spouse is not a person of the opposite sex. Therefore, under the DOMA your petition must be denied.”

While the case is going forward, however, some LGBT immigrants may be eligible for relief like the work authorization Garcia is waiting on as he finishes his PhD studies at the City University of New York. The Obama administration considers work permits on a case-by-case basis, said Ralls, who is confident Garcia’s application will be accepted.

“We’ve been living off my income, and he’s been going to college and been busy with his theater work,” said Ortiz about his partner, who writes Spanish-language plays for community theatre groups. “We haven’t felt that he was in danger of deportation. [The political climate] seems so much safer, but it’s not just about deportation, it’s about the need to work, getting on with his life, his playwriting.”

All five plaintiffs in the case hold higher education degrees, and all but one have worked in a specialty and have either retired from or are in the middle of a fruitful career.

But for some couples, work authorization is the least of their problems.

According to Ralls, of the 36,000-plus couples affected by the current legal framework, nearly 40 percent are raising American children and their families are still at risk of being pulled apart.

A child cannot sponsor an immigrant parent until they’re 21 year old, and because a same-sex spouse can’t sponsor the immigrant parent either, many families already facing separation because of discriminatory policies and are left with impossible choices.

“Children who are younger than the age of 21 should be in a position to sponsor their parents,” said Farwell, noting how difficult the binational family situation can be, regardless of sexual orientation. “Because the children can’t petition for the parents, you end up in this position where the parent has to either leave the child in the United States if they have to leave under a deportation order, or bring the child back to the home country, which in many cases in not a feasible solution.”

Where’s the end of the road?

There are three important steps that need to be taken by the government to secure the futures of same-sex binational families and extend immigration rights to LGBT couples, Ralls said.

First, the US needs to put green card applications on hold until the Supreme Court can rule on DOMA. This would provide LGBT couples with legal protection and the immigrant spouses will already be in the system, so they can apply for prosecutorial discretion, as well as get work authorization, which makes it easier to get other things like a driver’s license and a job.

The second thing is passage of the Uniting American Families Act, “which is legislation pending in Congress that would amend federal immigration law to recognize lesbian and gay partners,” said Ralls.

Lastly, DOMA remains in effect. It’s this federal law that prevents the appropriation of benefits to married couples, and keeps them from receiving green cards.

“The trend we’re heading toward is either DOMA being struck down or modified in such a way that same-sex couples are recognized by the federal government, especially as far as immigration is concerned,” said Farwell, who foresees many more cases like Immigration Equality’s coming up through the courts. “It’s inevitable. I think the Supreme Court is waiting to see how these cases play out in the various circuits and then they will have to address the issue and decide.”

Ralls believes that if DOMA goes before the courts soon, couples in states with marriage recognition may have access to a green card as soon as summer 2013.

Ortiz and Garcia, who have been unable to live full lives for decades, are cautiously rejoicing at the possibility that they’ll soon be afforded all their rights under the law.

“Look at it day by day,” said Ortiz. “This is so unexpected. The tide is turning in our favor, in favor of gay couples. We’re hopeful.”

Update: An earlier version of this article stated the memo from DHS hadn’t yet been released to the public. It is now available.