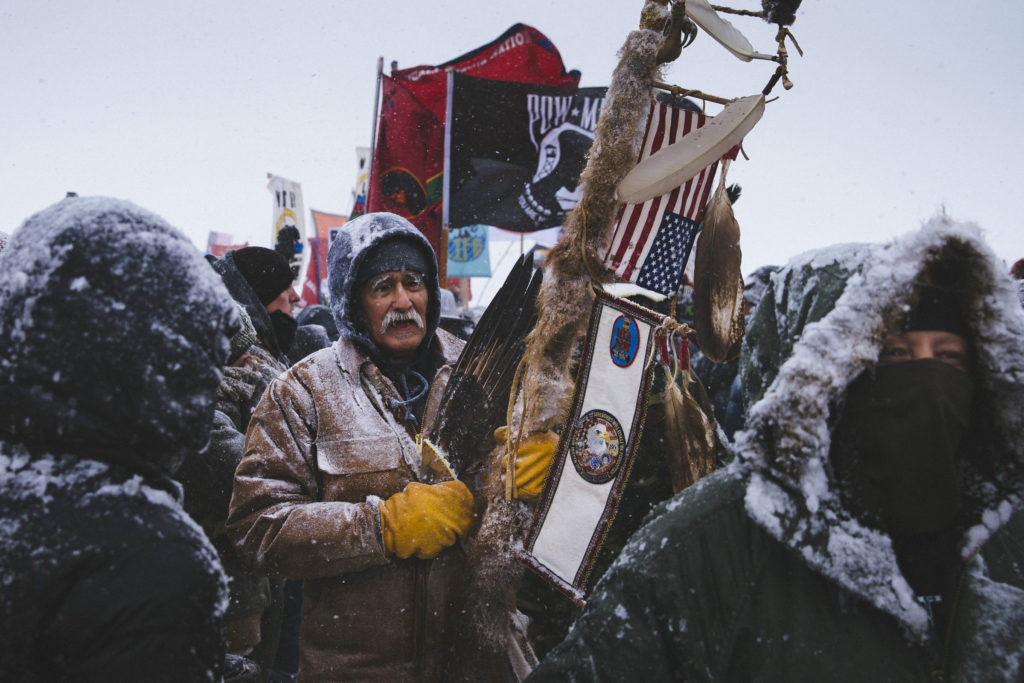 Glenn Scott, 60, a member of the Chippewa tribe and a Vietnam veteran, participates in a march of over 2,000 veterans from the Oceti Sakowin Camp to the police road block on Backwater Bridge on Monday, Dec. 5, 2016. Thousands of veterans deployed to Standing Rock to support the protest movement, offering to act as a human shield against police force. (Photo by Angus Mordant/GroundTruth)

In August, the seven bands of the Sioux gathered at the confluence of the Missouri and Cannonball rivers outside the Standing Rock Indian Reservation and lit the Seven Council Sacred Fire for the first time since the Battle of Little Big Horn. It marked the formation of the Oceti Sakowin Camp which, along with several smaller surrounding encampments became the hub of protest actions against the Dakota Access Pipeline, a 1,172-mile underground pipeline expected to transport crude oil from the Bakken region in North Dakota to an oil tank farm in Patoka, Illinois.

The Standing Rock Sioux has opposed the $3.78 billion project since 2014. Protesters have used the Lakota phrase “Mni Wiconi,” meaning “Water is Life,” to bring attention to their treaty water rights and the environmental impact a pipeline leak would cause. By early September, the area was reportedly home to a historically unprecedented 300 tribes and grew to more than 20,000 protestors by December.

Approximately 30 miles of the pipeline cuts through contested Sioux territory. The 1851 Treaty of Fort Laramie outlined a contiguous Native American territory across six states. By 1868, the treaty lands were redefined, pushing the Sioux nation entirely within South Dakota and, in 1889, Congress divided the Great Sioux Nation into six separate reservations which remain intact today. Although granted by the 1851 Treaty of Ft. Laramie and never ceded by the Sioux, the treaty has been largely ignored by the government ever since. The deeds were lawfully purchased by the oil company, who now owns the rights to build on a section of the land.

Peaceful protest actions were routinely met with riot police armed with military vehicles, tear gas, less-than-lethal rounds and tasers. During a confrontation on a freezing November evening, police attempted to disperse protesters with a water cannon. Confrontations with law enforcement have led to more than 500 arrests. Many allege not being read their Miranda rights and inhumane conditions while being held in police custody. Police allege that officers have been spat on and attacked with rocks, water bottles, sticks, bows and arrows, and molotov cocktails.

I have been following the situation in Standing Rock since August. I was interested in the unprecedented gathering of Native American tribes – a historic event in its in its own right. I slowly began making plans to document it.

On Sept. 3, I watched reports of private security using attack dogs against peaceful protesters while construction workers allegedly desecrated sacred sites. Unsure of the exact situation on the ground and determined to learn more, I booked my first flight and arrived at the Oceti Sakowin Camp on Sept. 6.

On my third day at the camp, I met Stanley Perry, a 53-year-old Navajo man who said, “We are a nation within a nation, on the reservation, who need salvation.”

I soon came to the realization that this wasn’t simply a gathering of tribes or just another environmental protest. The excessive response by the private security team on Sept. 3 was not only symbolic of the centuries of abuses against Native Americans, but also reflected the ever-increasing show of force throughout this movement.   On Oct. 26, I watched a Facebook live feed of police approaching the northernmost encampment, known as Treaty Camp, to inform protestors that the camp would be forcefully evicted. Not taking any chances, I booked a flight and, 8 hours later, touched down in Bismarck, North Dakota. The following morning, I photographed riot police, who were using tear gas, sponge grenades and tasers to clear hundreds of protesters from the path of the pipeline. It is a day I am glad to have documented and one I will never forget. The burning smell of tear gas mixing with the crisp prairie air is a smell that will never leave me.