Documenting a Passover under lockdown, within 100 meters of home 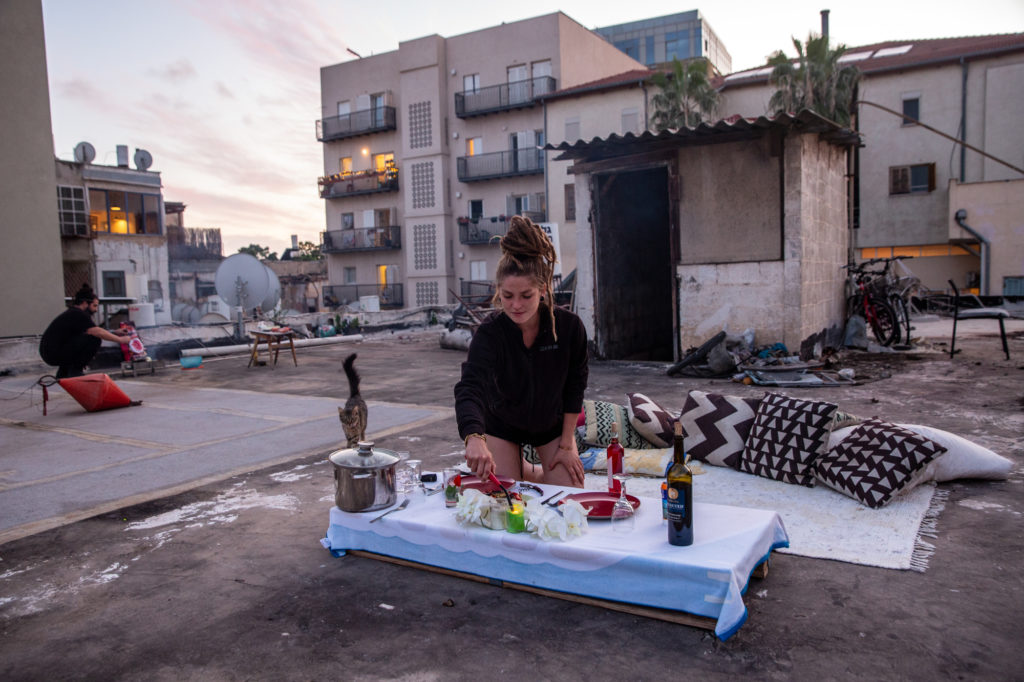 Elad Miarya, 37, and his girlfriend Zaria, 26, as they prepare their Passover Seder on the rooftop of the apartment building where they live in Jaffa, Israel on April 8, 2020. (Photo by Heidi Levine/GroundTruth)

TEL AVIV — I’ve traveled the world on photo assignments, but to document how Israelis celebrated the first night of Passover in the age of COVID-19, I followed the government edict and stayed within 100 meters of my own home.

Wandering out even nearby, holding my camera, wearing a protective mask and latex gloves, still felt strange. It was only the second day that I was allowed out of my apartment following 14 days of mandatory self-quarantine after I returned from Chittagong, Bangladesh, where I led a photojournalism workshop at the Voice of Hope and Humanity Foto Festival.

It was my first experience of formal teaching, and I lectured my students about not feeling pressured to get on a plane to cover a compelling story, and the importance of exploring their own neighborhood, including the struggles and joyous occasions in their own families.

Now, I was taking my own advice.

Moshe Hevroni, 67, and his daughter Eden, 34, are both artists who live in my apartment building along a main road in Jaffa just a short walk away from one of the oldest ports in the world. Normally they are together for Passover, this year they took part in the seder with a wall between them.

Eden, who had the company of her dog, feared that spending the holiday with her father could put him at risk because of his diabetes. Moshe, a father to four daughters and a grandfather of five, has lived his entire life in this building. “It will pass, it is not a war,” he said as we spoke from a safe distance in the yard of his home, where he creates sculptures.

As I returned home and stood on my balcony at dusk, overlooking the rooftops of solar panels and water heaters that dot the skyline, I smelled meat grilling on the rooftop across from mine.

I saw a couple hovering over a tiny grill, both of them with long dreadlocks, casually dressed in shorts. I recognized the woman; we met in a coffee shop a few years ago, and I remembered her affection towards my dog, but I never knew her name or that she lived in the building behind mine. I used my 70-200 lens to capture images of them from my bedroom window, where I had a better view, then shouted out to them to ask how they were celebrating Passover.

I struggled to hear as they shouted back their answer, a way of communicating that felt so foreign to how I have always spoken to people in my years as a photojournalist.

They invited me over and gestured how I could enter their building.

When I arrived at the home of Elad Miarya and his girlfriend Zaria Kovetz, we began to get acquainted. Zaria is a Russian immigrant who is studying to be a dog trainer and Elad works as a DJ. He has lost work due to coronavirus but is still trying to host parties online. Both are separated from their families for Passover this year.

“I love the silence but I am afraid we are going to lose our democracy from this crisis,” Zaria said as she carefully prepared a beautiful white tablecloth decorated with flowers, surrounded by oversized pillows laid out on the rooftop.

She lit the candles placed on the white cloth together with a bottle of red wine and glasses, insisting that I join them for dinner and filling one of the glasses before I had the chance to answer. Her boyfriend continued to grill chicken and meat on wooden skewers with roasted onions and tomatoes. Her cat clung close to her, hoping to share the meal.

I sat on the ground in front of the beautiful makeshift table, at a safe distance from Zaria and Elad, doing my best to keep two meters of social distance without going over the edge of the rooftop.

After the meal, I thanked them for feeding me and apologized for having to rush off, but explained that I needed to visit my downstairs neighbors. We all agreed to stay in touch.

Hanna Bahari, 60, and her sister Rina had agreed earlier to allow me to photograph them during their seder. I have often seen them from through the window of their home, playing cards with other women, especially during the late evening hours as I entered the tiny elevator across from their apartment. This was the first time that either sister had celebrated Passover without their family, and they positioned their dining room table directly across from a large television screen; their eyes fixed on “The Great Israeli Seder Live.”

“I don’t know what to do, I have never made a seder before,” said Hanna, who read from her father’s Haggadah, which is the written guide to the seder. Rina’s mobile phone rang and she ran to the kitchen to answer it, away from the noise of the television.

“Chag Pesach Sameach. Next year, we will celebrate together, I promise you,” she said to her grandchildren as she leaned over the kitchen table.

Hanna and Rina begged me to stay, offering me dinner, but I knew that for all of our safety it was best that I leave. I also felt guilty for working, leaving my own daughter Ashley alone at home on the holiday, and was eager to try to connect with my mother and daughter in the U.S., and my son in Poland.

These past two weeks in quarantine have given me the time to focus on self-reflection, but I’ve spent sleepless nights worrying about my own family, who are all spread out, separated by oceans. For the first time in my life, I cannot travel to see them.

I made every effort to reach out to friends and family, even many I have been out of touch with for years. My daughter and I are fostering two small kittens and feed them a bottle of formula every three hours. They exhaust us, but the sight of their tiny growth helped us maintain our mental health as we coped with the trauma of the horrific news around COVID-19; my grandson Daniel sang a lullaby to the kittens over FaceTime.

And though I now have some additional freedom because authorities are still allowing journalists to move around, and I’m committed to covering how the coronavirus is impacting both Israelis and Palestinians, our community is afraid of becoming infected and jeopardizing the health of others, including in our own families.

We have to take extreme precautions that for all of us are a challenging and novel experience. The well-worn flak jacket and helmet I have relied on so many times in conflict zones to protect me, even from the bullets of snipers, is now useless, replaced by PPE and social distancing guidelines as we sterilize ourselves and everything we touch like never before.

Photojournalists are unable to work at home. Our press credentials can help us weave in and out of police barricades and allow us to move around more freely but we are not at all exempt from this invisible enemy. Many of us still remain committed to covering this global epidemic and I hope that the lives I document, like the images I have taken in war zones, somehow make even the smallest difference in connecting my viewers and bringing greater understanding.

The sounds of the nearby church bells ring, the imam calls to prayer; the Arabic music floats through the air and the birds sing as neighbors nearby make me realize how much I appreciate the richness of life just 100 meters from home.