Documentary about Vietnam War reporters holds lessons for the present 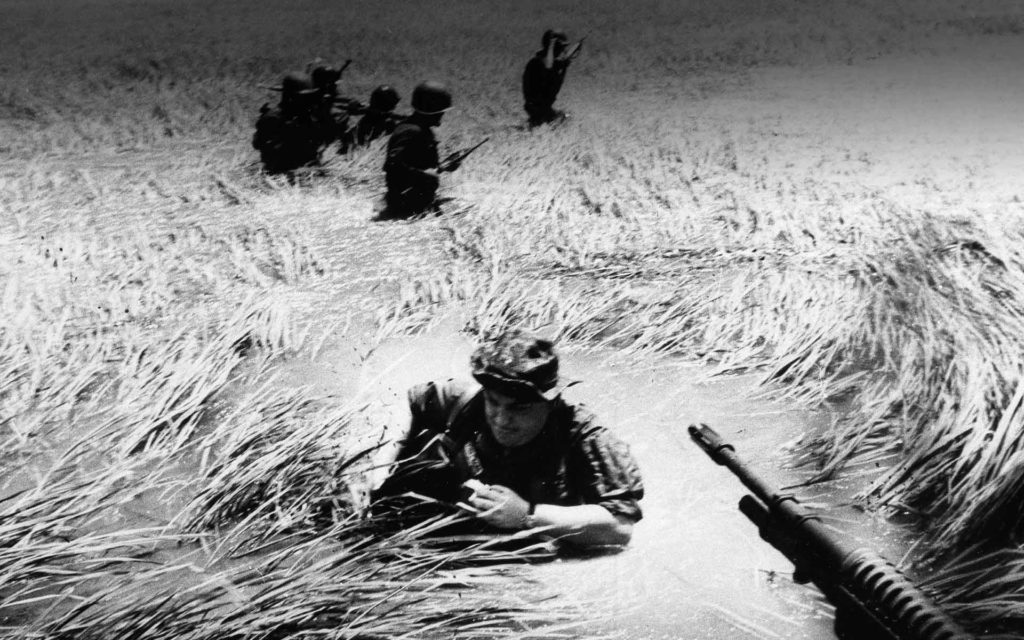 Photojournalist Horst Faas, who took this picture of the Vietnam War, is among five journalists whose efforts at holding the U.S. government accountable is featured in the documentary, DATELINE—SAIGON. (Horst Faas via Dateline-Saigon)

WOODS HOLE, Massachusetts — Like an illumination round fired from an artillery shell, a new documentary film titled Dateline—Saigon lights up the darkness over the current battle field for truth, where American journalism now finds itself in an intense firefight with the White House.

The historical documentary, which was seen Thursday by a sold-out audience at the Woods Hole Film Festival,  offers an extraordinary portrait of a group of talented, young reporters who risked their lives in the early 1960s trying to tell the truth about an ill-fated expedition by the American military into what was then just a distant land in Southeast Asia called Vietnam.

One of those journalists, David Halberstam of the New York Times, arrived in Saigon in 1962 at the age of 28 as an idealistic and patriotic young journalist. He tells of his shock and dismay at finding out that the government – from the Kennedy White House to the U.S. Army generals at HQ in Saigon – were lying to the American people from the very earliest days of an engagement that would ultimately stretch on for 13 tragic years.  What surprised him even more was how his own government turned against the journalists, seeing them as the enemy for simply trying to report the truth on the ground.

“The idea that your own government would hate you for what you do was stunning,” says the late Halberstam in a lengthy interview for the film “I didn’t realize that a vast lying machine would suddenly target us as the enemy.”

Produced and directed by Thomas Herman, a Boston-based lawyer and documentary producer, the film chronicles Halberstam’s reporting alongside UPI’s Neil Sheehan, and the Associated Press’ Malcolm Browne, Peter Arnett and the photojournalist Horst Faas. Herman dedicated 13 years of research, filming and editing for this film, which delivers a powerful message not only about the history of the war but more broadly about the importance of a free press in a functioning democracy.

Toward the end of the film, Halberstam reflects on the role of journalists to counter the lies of government. In so doing, he seems to illuminate the moment in which we live now — amid a struggling time for traditional journalism and during the presidency of Donald Trump, who has labeled journalists “the enemy of the people.”

Halberstam, who won the Pulitzer Prize for his reporting in Vietnam and who was killed in a car accident in 2007, was one of America’s greatest journalists. He never lived to see the election of Donald Trump, but it is hard not to imagine the focused rage he would bring to the current political moment in Washington, where the administration seems to demonstrate a pattern of deception, false information and bald-faced lies. Now, a grand jury has been convened in Washington to investigate a possible obstruction of justice case against Trump for statements and actions taken in the aftermath of revelations that Russia actively pursued a campaign to disrupt and influence the 2016 presidential election that brought Trump to power.

The interviews with all of these journalists, which Herman directs using stunning and never-before-seen archival footage and rare audio clips of President John F. Kennedy, seem to capture the core values of great journalism and the very heart of what we would call “ground truth.”

Halberstam summed up the reporting on the deceptions of the war this way: “We were proud of what we did … a bunch of young kids who stood and did their jobs.”

In a public conversation with Herman which I moderated after the film last night, we both agreed the words of Halberstam seem to echo today with a call to action for a whole new generation of journalists to stand up and do their job.

Charles Sennott is the founder and Executive Director of The GroundTruth Project, which serves as a media sponsor of the Woods Hole Film Festival.