Distanced by COVID-19, a church connects with the faithful via WiFi 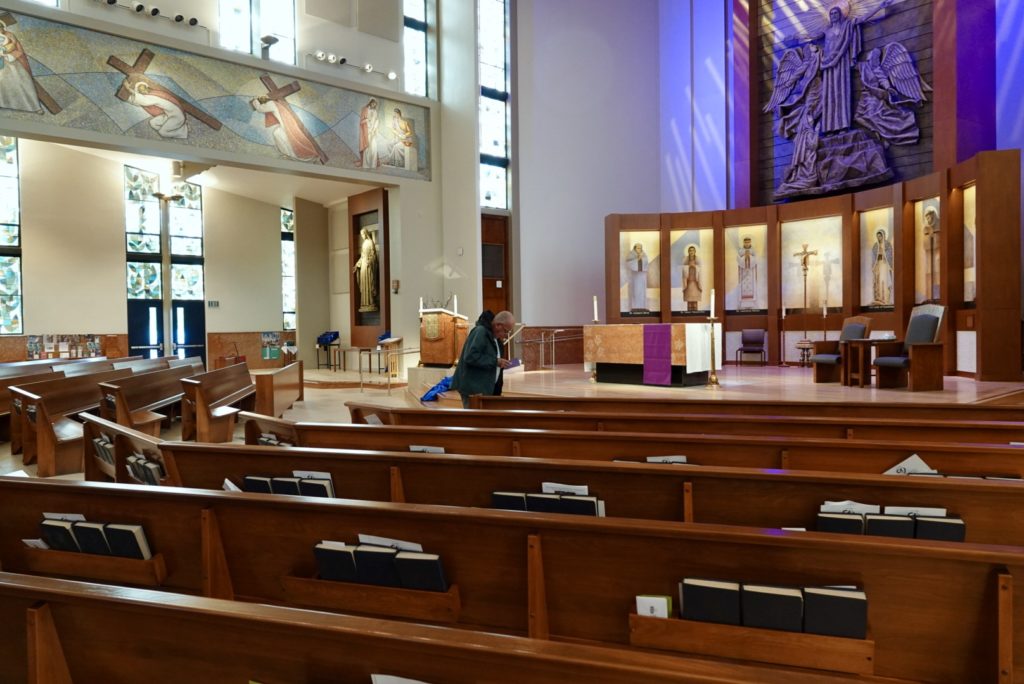 As the liturgist at St. Lawrence Martyr Catholic Church in Redondo Beach, Calif., Eve Moir trains the ministers and ensures the church’s services are organized and cohesive. But over the last few weeks Moir has taken on a new role.

“Lately I just call myself a production manager,” she laughed.

Moir is now the lead coordinator and operator of St. Lawrence’s transition into the digital world, a challenge many houses of worship and religious institutions are facing globally due to the ban on social gatherings caused by the COVID-19 outbreak. Daily Mass, which was moved into the church’s small chapel, is broadcast live on Facebook and YouTube from a phone, and recorded with a video camera and uploaded to St. Lawrence’s website. The chapel’s space only allows four people in the room at a time to uphold social distancing standards.

“It’s like a movie set,” Moir said. “We even count down before we go live for Mass.”

Although the task felt daunting at first, St. Lawrence has been swift in its efforts to move church services and resources online, keeping its community connected and cared for.

“We’ve all of a sudden moved into this isolated world,” Moir said. “And our faith is all about gathering, connecting and communicating. As Catholics, we are called to participate… not to just sit in the pew and listen, but to actively dialogue.”

Kenny Bohney was praying alone at the church on the evening of March 16th, when he learned it would not hold a Mass service the next morning. The previous day, Los Angeles Mayor Eric Garcetti had mandated the closure of all bars, restaurants, entertainment venues, and gyms, and now an order had been issued by the Los Angeles County Health Officer to ban all public and private gatherings of 50 people or more. Bohney, 86, who regularly attends 6:15 a.m. Mass followed by a coffee social, took the news with an open mind.

“I live alone, and most of my social life is at church, so that will be affected. But it is what’s best for everybody,” he said, sitting in a pew across the church’s center aisle.

After about two weeks of participating in online Mass, Bohney says that the biggest difference is watching three or four people celebrating Mass, rather than being in the presence of a large group. But on a personal and spiritual level, Bohney feels the celebration of Mass is the same whether he’s at church or at home.

“The miracle of electronics is shown to us,” he said. “I respond to prayers out loud at home to myself and to God.”

Gerry Stark, an 84-year-old parishioner and Eucharistic Minister at St. Lawrence, began self-isolating just over two weeks ago. Her prayer ritual used to include visits to the church’s Adoration Chapel, which was open 24 hours a day, seven days a week. “I felt very close to the Lord there,” Stark said.

Now she lights a candle in her condo where she lives alone, sets up her iPad to watch Mass, and says her prayers as much as possible. “My prayer life is very important to me…Praying for people that I know, people that I don’t know, people that I hear about who I just know need prayer, especially now.” she said.

The biggest adjustment parishioners say they’ve made, however, is in the way they take the Holy Communion. Instead of physically approaching the altar and receiving the Eucharist from the hands of a priest, they are taking what is called Spiritual Communion— a special prayer led by the priest during Mass: “…Since I cannot at this moment receive You sacramentally, come at least spiritually into my heart. I embrace You as if you were already there and unite myself wholly…”

Parishioner Ann Kaessinger, 59, is immunocompromised and struggles with health issues, sometimes making it hard for her to attend church. St. Lawrence’s online Mass and Spiritual Communion ritual keep her linked to her faith community. “The God I believe in knows that I would be there and would receive if I could,” she said. “But due to my circumstances and COVID-19, I can’t.”

For other members of St. Lawrence, especially those without access to a computer or internet, the pandemic forced a drastic cut in their connection and communication with their church.

To address this, St. Lawrence’s Pastoral Care Coordinator, Didi Egnatuk, created a network of volunteers who make check-in calls on their fellow church members. Each volunteer is emailed a script and a list of about 50 people to call. In all, they’ve already called over 3,000 people.

“It’s not online, it’s person to person,” said Egnatuk. “This is how we’re maintaining our personal relationships with parishioners and one another, because there’s no other way.”

The response has been overwhelmingly positive, with many volunteers reporting how grateful people are to be asked a simple “How are you?” One volunteer, Jeff Vicario, 49, described a call in which a woman answered the phone and asked for a prayer for her husband, who was experiencing a lot of anxiety. They said a prayer together over the phone.

“She was so appreciative,” Vicario said. “And I’m trying to set an example for my daughter, just to show her that it’s the little things. It’s just a phone call, but it could have made a world of difference for the person on the other end.”

Some volunteers offered to bring groceries and other necessities to anyone who needs them. Egnatuk herself, gloved and masked, left a bag of groceries on the porch of an elderly couple who lives nearby, after the couple’s niece asked if someone from the church could check in on them. The man came to the door to thank her, but she kept her six feet of distance. Egnatuk said the whole experience has been very emotional. “It’s such an undertaking, and [the volunteers] are just unselfishly doing this,” she said. “I’m hoping that this love continues when this is all over.”

The priests at St. Lawrence have also taken part in this outreach effort. In the last few weeks, the Reverend Monsignor Peter O’Reilly, 85, one of three priests at the church, has been connecting with parishioners as much as possible.

“I made 27 calls last night,” said O’Reilly. “It gives people a sense of stability and predictability, and we can provide a certain amount of continuity for them.”

As Easter approaches, parish staff are busier than ever. Moir is working hard to trim down Holy Day liturgies so that they make sense for online and livestream purposes.
Some Holy Day rituals, like the washing of feet by the priest on Holy Thursday, or the igniting of fire and lighting of the Paschal candle outside the church, which begins the Easter Vigil on Holy Saturday, will be cut entirely; The Vigil will be shortened by about half and baptisms will be postponed.

However, Moir has created a Holy Week Livestream schedule that includes ideas for how to participate in rituals from home. On Holy Thursday, for example, parishioners are encouraged to wash the feet of others in their household; For Holy Saturday, they can light a candle and recite the baptismal promises; And on Easter Sunday, parishioners can add flowers to a bare cross, display it in their window and post a picture to social media with “#JesusDontQuarantine.” All Holy Week liturgies will be filmed in the main church, instead of the chapel, with Easter Sunday Mass scheduled to commence at 9 a.m.

While O’Reilly finds the unexpected transition unsettling, he sees it as a challenge to address head on. On the evening that St. Lawrence announced Mass would be canceled, O’Reilly stood facing the altar, eyes closed, in an empty church. Rain beat down heavily on the roof and stained-glass windows.

Moments later, he shared his thoughts. “It’s an opportunity to ask, ‘How can I, in a different way, preach the same gospel?’” he said. “When everything is going well, we don’t really question whether the things we do are sustainable. And then things fall apart. So, is there a lesson to be learned from that? Is there something God is trying to say to us?”

Maybe, O’Reilly concluded, God is asking us to “Look again.”