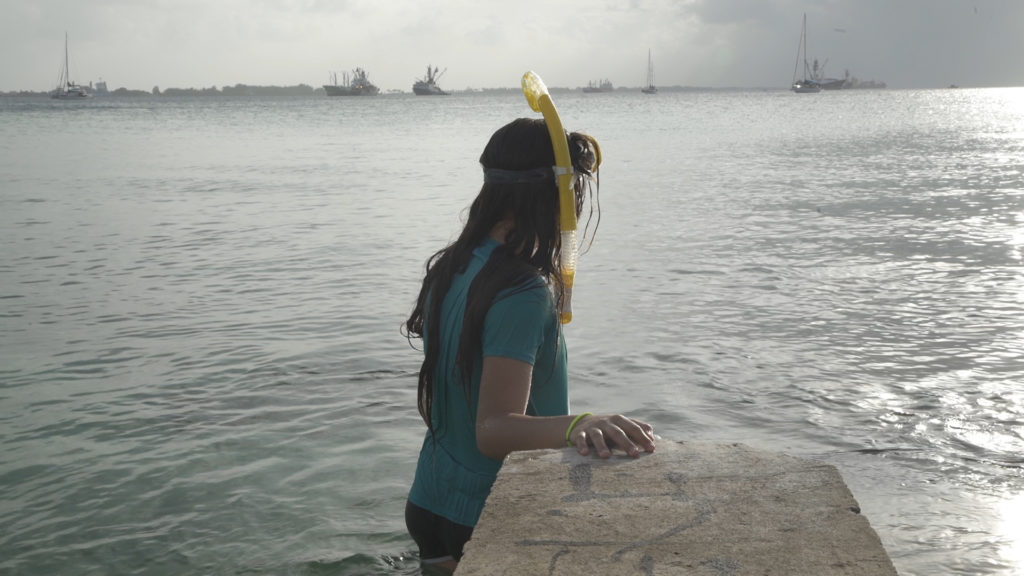 Twelve-year-old Faith Debrum stands in shallow water in the Republic of the Marshall Islands. (Photo by Michelle Mizner/GroundTruth)

BONN, Germany – One of 12-year-old Faith Debrum’s favorite hobbies is diving off the seawall in front of her house and swimming to a nearby reef in search of interesting fish. When asked how climate change might affect that hobby, she had a ready answer: “1.5 to stay alive!”

It was a phrase that my reporting partner and I heard again and again while we were in the Republic of the Marshall Islands earlier this year speaking to children like Faith about the risks climate change pose to their country’s future. “One-point-five” refers to the degrees Celsius (2.7 F) that scientists believe world temperatures can afford to rise by 2100 without making life on low-elevation island nations like the Marshall Islands nearly impossible. Researchers believe it would also keep the number of new heatwaves and heavy rains globally in check.

In the seminal 2015 Paris Agreement on climate, the world committed to holding global warming below 2 degrees Celsius by 2100 – but also “pursuing efforts to limit” warming to 1.5 degrees. That additional proviso was added under pressure from a “high ambition coalition” of 100 nations, which had spent years advocating for a 1.5-degree goal to be included in the agreement, and, against political odds, succeeded.

By all accounts, staving off the extra half-degree of warming will require radically new efforts – and soon. Climate experts say every year that passes without significant action will make it harder to reach the 1.5 target. Already, temperatures have risen 1.1 degrees Celsius (2.0 F) since pre-industrial times. And, even with the Paris accord in place, temperatures are on track to surge by 3.2 degrees Celsius (5.8 F) by the end of the century. One study published this year pinned the planet’s odds of achieving 2 degrees at just 5 percent – and of achieving 1.5 at just 1 percent.

Despite seemingly unsurmountable obstacles, those who advocated for 1.5 degrees in Paris were once again advocating for it at this year’s United Nations climate negotiations in Bonn, while preparing for another major push at next year’s conference in Katowice, Poland.

The half-degree between 1.5 and 2 may seem minor, but for low-lying coastal areas, it is imperative: According to climate models, it likely means an extra 10 centimeters (3.9 inches) of sea level rise, perhaps more. Those extra inches are critical for places like the Marshall Islands, where the mean elevation is six feet above sea level.

Researchers and environmental groups insist the goal is achievable.

“The train has not left the station,” said Andrew Jones, co-director of the nonprofit climate research group Climate Interactive. “It’s leaving, though, and we need to run faster than we ever have in our lives to catch it.”

A recent study co-authored by Jones, and another published in September, underscore the steep climb nations face in reaching the 1.5 target: Global emissions must peak within the next few years and then fall precipitously. Developed nations would have to meet the goals they set in Paris years earlier than promised, and the world would need to actively phase out fossil fuels, rather than allowing them to age into retirement. And not only would humans have to stop adding greenhouse gases to the atmosphere by mid-century, they would have to remove vast quantities already there.

This last element – removal of gases from the atmosphere – is an idea integral even to Paris’s 2-degree goal, but must be done far more aggressively to achieve 1.5 degrees, Jones said. Climate models suggest it will require extensive use of low-tech methods of carbon sequestration—reforestation (planting trees where they have been removed) and afforestation (planting trees where there never were). It will likely also require high-tech methods still under development, for example, capturing carbon from the air, turning it into rock, and placing it underground. The promise of these high-tech carbon-scrubbing methods have been embraced by the international community, but they remain distant and costly, and therefore unconvincing to many environmentalists.

“If your basement is flooding, your priority is to turn off the faucets – not to run upstairs for the mops and the buckets, especially if you don’t know if they’re really going to be there,” said Jones.

As a result of the high ambition coalition’s success in Paris, the agreement invited the U.N.’s scientific analysis body, the Intergovernmental Panel on Climate Change, to write a special report on how 1.5 degrees might be reached. The report is currently under review and will be released to the public next October – immediately prior to the next climate summit. And Fiji, which hosted this year’s summit in Bonn, has made a play to ensure the 1.5 goal cannot be sidelined next year: It has placed the 1.5 report at the center of discussions over each nation’s climate goals.

Still, even some advocates remain unsure whether 1.5 is achievable.

“One-point-five was a tall order,” said Abdullahi Majeed, minister of state for energy and environment for the Republic of Maldives, which also sits just a few feet above sea level. “We’re at 1.1-degree already, and 0.4 is not much to play with.”

Majeed has a background in meteorology and has attended the U.N. climate conferences since the early 1990s. He remembers small island nations pushing for a 1 degree warming limit in the late 1990s; he watched that goal slip over time.

Now, Majeed said, he is skeptical the world can even reach 2 degrees – especially without the backing of the United States. President Donald J. Trump has vowed to withdraw the U.S. from the Paris Agreement and moved to roll back emissions regulations. Although Majeed commended local government and business efforts to meet U.S. climate obligations in lieu of the federal government, he said he has felt the absence of American leadership in the negotiating rooms.

Kiribati President Taneti Mamau, whose island nation is also in existential danger due to climate change, similarly expressed wavering hopes when asked whether 1.5 degrees can be achieved.

“Good question,” he said. “Maybe it’s not for us to answer. Maybe the best to answer that is those producing the carbon.”

But Stephen Cornelius, the World Wildlife Fund’s chief adviser on climate change, based in the U.K., insisted 1.5 is possible.

“Do I look like a delusional man?” he said. “It’s going to be challenging, we all know that, but it’s something we have to do. We have to try and do this, because the consequences of not are too great.”

Even in her short lifetime, Faith Debrum has already seen some consequences. Not long ago, she watched a king tide sweep over her seawall and into her home. She ran through the sea that suddenly occupied her front yard, trying to rescue her dogs. King tides – tides that wash up and over the island – have become more common than they once were; within decades they are projected to increase many fold.

Faith has also watched the coral reef in front of her house go from colorful to a greyish white, and noticed there aren’t as many interesting fish for her to spy on there. She may have been observing the effects of the longest global coral bleaching event in recorded history, which researchers have blamed on warming oceans.

If the world prevents temperatures from rising past 1.5 degrees, there’s a chance Faith’s coral reef will stay alive; with 2 degrees, experts say, it almost certainly will not.

A version of this story appeared in FRONTLINE on November 18, 2017