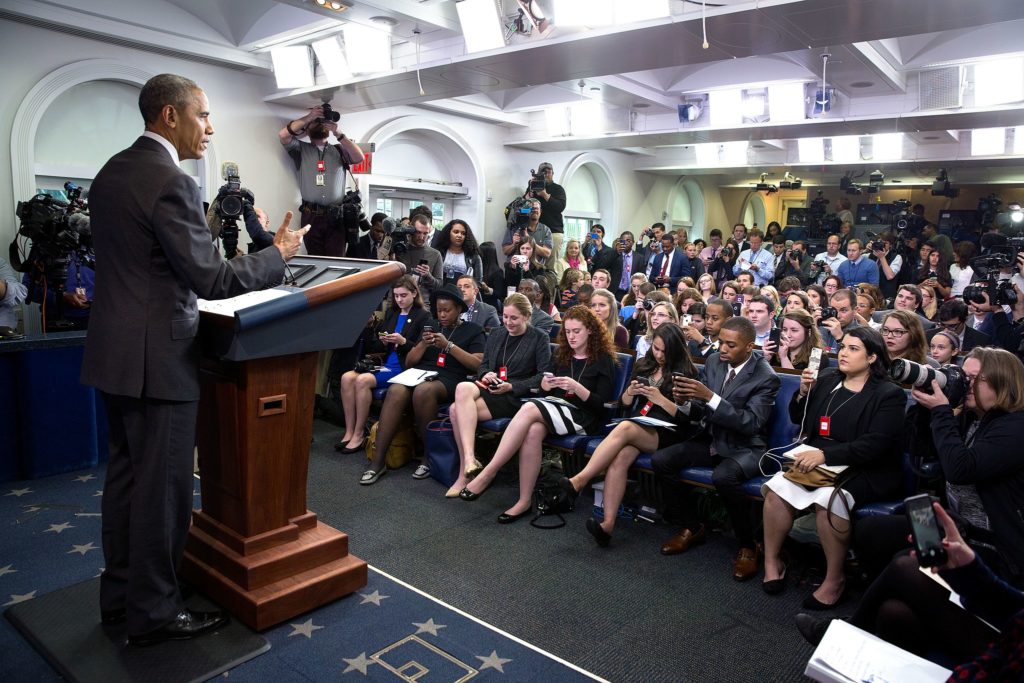 It can to strike the right balance between having a personality and maintaining journalistic standards in your social media presence. Pictured, President Barack Obama addresses student journalists at College Reporter Day at the White House on April 26, 2016. (Pete Souza/The White House)

The rules of engagement for journalists on social media seem simple on the surface. Be balanced. Be nonpartisan. Be careful with stories that are single-source or unconfirmed, and be clear about attribution.

But these scenarios aren’t always black-and-white, and it can be challenging to be a human and “unbiased” at the same time.

The New York Times did a solid job with its social media guidelines, but there were plenty of legitimate critiques about how the self-evident rules actually were more complicated and more difficult to put into practice.

For some advice on how to navigate social media at a time when the scrutiny on journalists is greater than ever, I spoke to Katherine Reed, a journalism professor at the University of Missouri School of Journalism.

This interview has been edited and condensed for clarity and brevity.

QK: What makes it difficult to be neutral on social media, or what’s the problem with that word, “neutrality”?

KR: It’s hard because we’re human. We have opinions. For a long time, this idea of objectivity was misunderstood, badly explained. I always say to my students you cannot be objective because you’re a human being. You make decisions about what you’re going to cover, you make decision about who you’re going to talk to. You have your own personal world framework for looking at things. But the process is objective. There’s a process of verification that is closer to the scientific method than people realize. If you use that process, then it really forces you to set aside your biases….It really helps mitigate the fact that we have opinions and a way of looking at the world.

But there are a lot of gray areas.

If I say something should be done about these mass shootings, because I am a human being, does that mean I am pro-gun control, or am I just expressing a human emotion that is completely natural and normal, which is the horror at the situation we are in?

There are so many ways that we must and should express our humanity about things that happen, and certainly on social media that is going to happen, because that is how many of us use social media as journalist: to be human and to connect more to the rest of humanity by expressing humanity. So I think it gets really tricky for young journalists, like the students I teach here at the Missouri School of Journalism: where is that line? I tell them you are not news robots…we don’t want you to reject those feelings, but through compassion the storytelling comes. And I think people respond more warmly toward journalists who show humanity, who show compassion…But it’s a fine line to walk.

QK: I guess the pushback is, you can have those feelings, but should you air them publicly?

KR: But is there a pro and a con when you talk about children getting killed in a school? It’s not the only issue where you could easily defend that there is not an “other side.” You’re completely justified in feeling there is an outrageous, horrible thing happening in the world. The situation in Sudan. That’s a terrible thing. If you’re covering Sudan, that’s way trickier, because it looks like you’re opposed to the regime, but you certainly can’t be for people being gassed. So when you’re covering a story like that, I think it gets very difficult to express natural normal reactions to human events and being able to do your job in a way that isn’t undermined by the way you’ve expressed your feelings on social media.

QK: Would it be harder to engage with sources who may disagree with you because they see your social presence and make presumptions that you’re not being fair?

KR: Well that’s the crux of the issue. You want to be able to do your job. In order to be able to do your job effectively as a journalist, you’ve got to be able to talk to everybody, and you have to be able to earn their trust and they have to believe you really are capable of setting aside whatever personal feelings you have to do really — and I’m using this word carefully because sometimes it’s not appropriate — “balanced” reporting. Now people made this mistake covering climate change in a “balanced” way and they thought they were doing the right thing by including climate change deniers and skeptics long after we had scientific consensus that climate change was real and human being were the cause of it. Then you have this false equivalency problem, and people end up really confused, and you’ve undermined your journalism and lots of other people’s journalism because no one believes what you have to say on the subject.

But when you’re talking about an issue where reasonable people are disagreeing — gun rights, the second amendment, gun control — it’s completely different.

QK: Something I’ve heard said about how to use social media, is to apply the same common sense and news judgment as you would to a news story.

KR: One of the things that come up in discussion in my reporting class…they are really afraid of using social media as a journalist. They are afraid of striking the balance, not crossing the line. Not doing something embarrassing or stupid. I tell them a lot, just learn as you go. Don’t do something you’re going to regret, I don’t mean experiment wildly. It’s like [discovering your] writer’s voice, it gets clearer with practice. I think people can develop a social media voice that works for them that is really uniquely their own and effective for journalism and doing journalism. I often will recommend they look at particularly successful examples out there on the media landscape. There are journalists who are really good at it. But they didn’t get that way overnight. They stumbled, they screwed up a few times, but little by little they found a way to sort of be effective on social media and engage with audiences and convey a warmth that makes people want to follow them. And when people want to follow you, you have a much larger pool to dip into if you have a question.

[Some reporters Katherine recommends who have a personality but still maintain journalistic practices include Matt Pearce at the Los Angeles Times, and Nikole Hannah-Jones who writes about race and education for the New York Times.]

QK: I guess your social life is still like your lived life, but more public. On so many social accounts you can have your privacy setting really high, but what you post there could still become public.

KR: What I tell my students is to learn how to navigate that space that is professional and private. In other words, This is me, sort of. If you think about how people use social media to vent, it really doesn’t have a very positive effect …. Another way to look at it is, in terms of the young journalist making the sacrifice of not using social media [to vent], it really isn’t that effective.

The advice I give to my students is, the things you feel very passionately about, talk to your friends about those things. Don’t get on social media and talk about those things. It’s very possible it will undermine you, it’s going to create obstacles to the best possible reporting you can do.

It is a sacrifice you make when you become a journalist: what you think about something isn’t the story. It’s the facts, what other people think, the data, whatever the pieces of that story are, those are important.

QK: I suppose that’s why journalists should create private spaces outside their work to recharge and really be themselves.

KR: We talk a lot about this in my trauma reporting class, which is the idea of self-care.

We don’t talk about it often enough in the context of how do you deal with the tension of wanting to scream your opinion from your mountaintop when something is happening that you find absolutely unbelievable and outrageous, and we now have a mountaintop which is social media? How can we channel that emotion in a constructive way that doesn’t undermine our journalism? You don’t want to bottle up a lot of emotion, it’s not good and you can’t do it.

A person can be forgiven right now who is doing journalism for feeling a lot of feelings.

So having practices in place for how do you deal with those feelings, especially for journalists who are reporting on a terrible situation and not seeing a change. That’s really demoralizing and really hard. Is it enough to say, “I took the pictures, I wrote the story, it’s out there. I did my job. It’s the best I can do?”

Yes, but sometimes we don’t feel like we’ve done all we can do because people aren’t responding. That produces feelings, I think, of almost impotent rage, and sadness and frustration and hopelessness. I haven’t seen many conversations about that in journalism, and I think we should have them.