Did India Get Its Math Wrong About How Many Cheetahs Can Fit In Kuno? 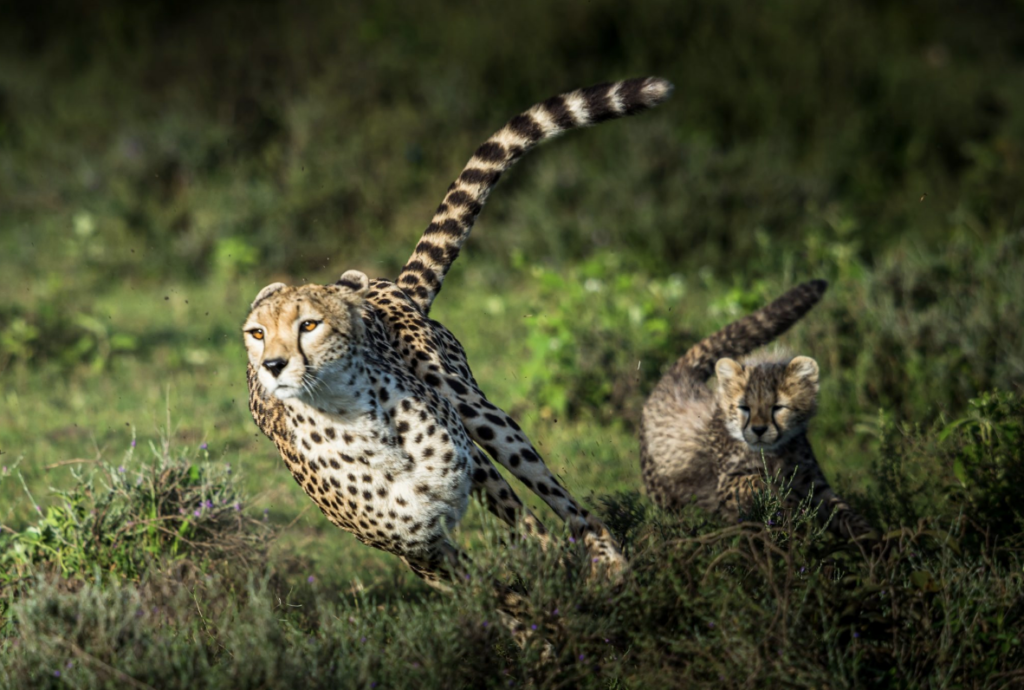 An adult cheetah and a cub in Tanzania, April 2021. Cheetahs have been found to move around very large areas of land. (Photo by: Sammy Wong/Unsplash)

The project aims to establish a cheetah population in the country after the species became extinct in the 1950s. It has faced numerous criticisms already – yet they refuse to abate. Now, scientists who have studied large carnivores around the world – including African and Asiatic cheetahs in the wild – have called it an “ill-advised” and “ecologically unsound” project.

They add that if the Indian government persists with plans to bring more cheetahs from Namibia and South Africa to India, the action plan needs to be “radically revised”, or the money invested – Rs 453.80 crore, according to the letter – could go to waste.

Conservation money is hard to come by, so funds lost on a Project Cheetah that will not work are effectively funds stolen from other, potentially more effective programmes.

On September 17, the Union environment ministry brought eight African cheetahs from Namibia to Kuno National Park, Madhya Pradesh as part of Project Cheetah. India’s cheetahs became locally extinct in the 1950s due to hunting and – less well-known – the loss of grasslands and scrub jungles.

The Indian government has expressed hope that the newly arrived cheetahs will reestablish the species’s presence in the subcontinent and bring more conservation attention to grassland and scrub habitats.

Experts, however, don’t buy the logic. Abi Tamim Vanak, a senior fellow at the Ashoka Trust for Ecology and the Environment, Bengaluru, told The Wire Science in January that the government still classifies such habitats, called open natural ecosystems (ONEs), as ‘wastelands’ and that there’s no policy to manage these ecosystems.

A recent study he co-authored mapped ONEs in India and found that only 5% of them are part of India’s protected areas. India is also home to several charismatic grassland fauna, such as the great Indian bustard, whose populations have nosedived as well. Experts have recommended that India conserve its remaining grassland species instead of bringing in new ones.

The introduction of African cheetahs to Kuno will also delay the coming of Asiatic lions to the park, Ravi Chellam, who has studied and engaged with the conservation of Asiatic lions of Gir for decades, told The Wire. Asiatic lions are currently found only in and around Gir in Gujarat. They desperately need a new home because their geographic confinement has limited their population to a small, and diminishing, gene pool. This heightens their vulnerability to disease outbreaks.

The Indian government had first identified Kuno for the lions. Even the Supreme Court ordered the government to proceed with the relocation in 2013. But the Gujarat government has refused to part with the lions.

Experts have also said that Kuno’s leopards could threaten the cheetahs, and that the African cheetahs differ both genetically and physically from the Asiatic subspecies originally found in India.

Tiger biologist Ullas Karanth, emeritus director of the Centre for Wildlife Studies, told The Wire that Kuno can accommodate fewer than five cheetahs since they need large tracts of land to thrive, even in the best of habitats. Statistical ecologist Arjun Gopalaswamy had told The Wire Science that the need for a large range could encourage the cheetahs to move out of Kuno and into villages surrounding the park.

On October 19, eight scientists who have studied carnivores and their habitats in Asia and Africa wrote in the aforementioned letter that introducing African cheetahs to India is an “ill-advised conservation attempt”. Gopalaswamy is the letter’s lead author. Other co-authors include Vanak, Chellam and Karanth from India, and four scientists who have studied both the Asiatic and African cheetahs in the wild in Iran (the last home of the Asiatic cheetah) and South Africa, from where India might import more cheetahs.

A significant part of their ire is directed at the action plan. The Wildlife Institute of India,  Dehradun, the National Tiger Conservation Authority and the Madhya Pradesh forest department framed the plan in December 2021. They estimated Kuno’s cheetah carrying capacity – based on the availability of prey – in Kuno to be 21 cheetahs across its 748 sq. km territory. This is around three cheetahs per 100 sq. km.

According to the letter, however, the action plan has got this wrong. The authors quoted a 2021 study that found that even in the Maasai Mara of Kenya, which is prime cheetah habitat and supports a large prey base

, cheetahs had home ranges of around 750 sq. km and occurred in densities of just about one cheetah per 100 sq. km.

“Based on some of our work, and that of other cheetah researchers, we know that free-ranging cheetahs, even those that reside in prey-rich areas, require a lot of space,” said Femke Broekhuis, an assistant professor, Wildlife Ecology and Conservation Group, Wageningen University and Research.

“Kuno does not provide this space and therefore there is a high chance that the introduced cheetahs will move beyond the park boundaries and encounter people, livestock and domestic dogs. This may lead to a harmful situation for both the cheetahs and people living in the area.”

Bettina Wachter, a cheetah biologist who wasn’t part of the group that penned the letter, said that the distribution of cheetah territories, instead of prey availability, determines how many cheetahs fit into an area. And the distribution of territories hinges on their unique spatial and communication system.

Wachter and her colleagues have studied cheetahs in Namibia for more than 20 years, finding that males are either territorial, defending tracts of around 400 sq. km, or ‘floaters’ that roam around in home ranges that could encompass two to four territories. The females have home ranges of around 650 sq. km.

Cheetah territories are often also not next to each other. Wachter’s study in Namibia revealed that they maintain “communication hubs” within the core areas of their territories – where territorial males, floaters and females exchange olfactory information. These core areas are separated by at least 20 km.

So Kuno “seems too small to maintain a viable population”.

Wachter agreed with the letter’s authors that the action plan “has not included all available scientific information”.

“The unique spatial system of cheetahs does not seem to have been considered for the calculations of the carrying capacity in the action plan,” she said.

In fact, she warned, Kuno may have already reached its carrying capacity of cheetahs.

Project Cheetah has thus far brought three males (two brothers and a solitary male) and five females to Kuno. Brothers always stay together, so the three males are likely to establish two territories of 400 sq. km each – which would cover Kuno’s entire area. The five females could settle in between the territories, possibly distribute themselves over a larger area, or occupy areas overlapping with those of the males.

If India brings more males in future, they will try to establish new territories most likely outside Kuno, since Kuno isn’t fenced, Wachter added. “Of course, if cheetahs are fenced in, they are forced to use less space and overlap their ranges, but Kuno National Park is not fenced, [and] thus it is likely that they try to use the ranges that cheetahs in Namibia normally use.”

As such, Project Cheetah is the first cheetah introduction scheme to move cheetahs into an unfenced reserve. So the Gopalaswamy et al. letter wrote: “We anticipate that adopting such a speculative and unscientific approach will lead to human–cheetah conflicts, death of the introduced cheetahs or both, and will undermine other science-based species recovery efforts, both globally and within India.”

Vincent van der Merwe, a cheetah biologist previously with the Endangered Wildlife Trust in South Africa, told Down to Earth that fences were important to ensure cheetahs in African parks thrived. Specifically, they keep cheetahs from wandering too much and allow the population to grow. “To date, there have been no successful cheetah reintroductions into unfenced systems,” van der Merwe said.

So it seems India is in uncharted waters. Experts, conservationists and wildlife officials will have to keep the the cheetahs from getting stressed and/or not compromising the project altogether, although the cats’ needs will still prevail.

“I certainly very much hope that the cheetahs will do fine, but if not, I hope that the involved researchers know exactly what the issues were, to better predict future outcomes of such trial and error activities, as are done in this case,” Wachter cautioned.

As the authors wrote in the letter, the Indian government will have to “radically revise” its action plan if it’s going to bring more cheetahs. They suggest two significant edits in particular: a) incorporating “contemporary research on free-ranging cheetah populations and their genetics”, and b) securing India’s threatened savannahs and grasslands, and their fauna.

Otherwise, the authors recommend India spend the money to help conserve wild cheetahs in Africa and Iran. Fewer than 50 individuals of Asiatic cheetahs remain in the wild in Iran, over 2 lakh sq. km of habitat, and could do with more funds.

“Such conservation investments can be well-used within Iran to save and revive cheetah populations. When the Asiatic population recovers, some of them can be reintroduced in India at a later date,” Leili Khalatbari, a researcher at the University of Porto, Portugal, who has been studying cheetahs in Iran for over a decade and a co-author of the letter, said.

“In the meantime, the Indian grasslands can be restored to be able to support enough prey.”

In a letter published on October 20, scientists from Michigan State University supported this idea. India could provide Iran with funding and expertise to conserve the Asiatic cheetah there. Iran could then offer Asiatic cheetahs to India.

This strategy has the advantage of reintroducing Asiatic cheetahs themselves – which was the subspecies that vanished from India 70 years ago.

The National Tiger Conservation Authority under the Union environment ministry, which is overseeing Project Cheetah, didn’t respond to requests for comment.

Note: This article was updated at 2:52 pm on October 27, 2022, to note that the Maasai Mara study found cheetahs occurred in densities of about one cheetah per 100 sq. km, instead of one cheetah per sq. km as was stated earlier.