An offshore company blasts its way through Sierra Leone 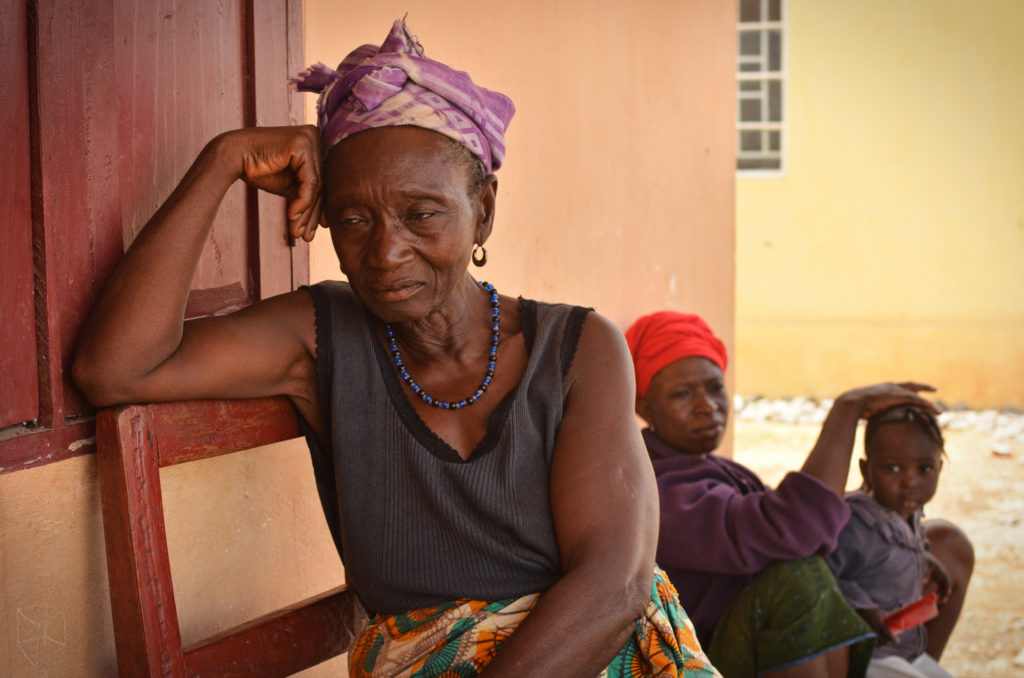 KOIDU, Sierra Leone – Once or twice a week, as the sun sets on the city of Koidu in eastern Sierra Leone, residents pack their things and head uphill. A diamond mine is about to blow.

Some families leave behind boiling cooking pots, moved on by police and security forces before miners set off charges to blast away the dirt and rock that hide the diamonds. For some in this city of more than 100,000 residents, the explosions remind them of the mortar bombs that fell on Koidu during a rebel attack in the 1990s, when civil war overtook the West African nation.

The earth shudders. Buildings crack. And Koidu residents’ lives go on as they have ever since an international mining conglomerate resumed digging in Koidu 13 years ago.

“When the blasting is done during the dry season, dust and pieces of rock sometimes fly into the air,” said Bondu Lebbie, a 21-year-old mother of two who lives at the foot of the mine’s waste heap. “The dust leads to coughing, headaches.”

She buys Panadol to dull the pain.

Lebbie’s story isn’t uncommon in places across Africa, where mining and drilling operations seek oil, gas and minerals. Families who live near the mining sites often struggle with poverty and environmental hazards. Meanwhile, ventures that extract diamonds, oil and other valuable commodities shuffle billions of dollars around the globe with the help of shell companies in Panama, the British Virgin Islands and other offshore havens.

“Whether it’s dust, water contamination, loss of land or violence, nearly all of the costs of mining activities in Africa are borne by the communities,” said Tricia Feeney, executive director of a British non-governmental organization called Rights and Accountability in Development. “And all the benefits are going to this tiny cadre of wheeler-dealers – individuals or companies.”

The Koidu diamond mine is operated by Koidu Limited, a company set up in the British Virgin Islands in 2003 for $750 by Mossack Fonseca, the law firm recently rocked by the Panama Papers leak. The documents show that Koidu Limited is owned by Octea Mining Limited, a company in turn owned by a series of offshore companies in the British Virgin Islands, Guernsey and Liechtenstein controlled by billionaire Israeli mining magnate Benjamin Steinmetz and his family.

Many of the diamonds blasted from the ground around the city of Koidu end up adorning engagement rings and pendants sold at Tiffany & Co., the luxury U.S. jeweler that loaned Koidu Limited tens of millions of dollars for rights to the stones.

Koidu Limited has become one of West Africa’s most recognizable – and controversial – mining companies.

In 2007 and in 2012, local residents and workers protested the company’s working conditions and environmental impacts. In both confrontations, police opened fire, killing two in 2007 and two more in 2012, including a 12-year-old boy.

In 2015, Sierra Leone authorities threatened to strip Koidu Limited of its license, accusing the company of failing to meet loan repayments owed to the government and bankers, according to The Wall Street Journal. That same year, Koidu city lawyers alleged in court that the company dodged hundreds of thousands of dollars in local property taxes. Koidu Limited, for its part, says it has spent millions in community development, including building a resettlement village and providing water taps, buses and a health clinic.

Koidu’s mayor, Saa Emmerson Lamina, led the court battle. Roads are bad and unemployment is high, he says, and the nearest X-ray machine is 212 miles away. “If we got that money, we would have been able to make some serious changes in the lives of our people, in agriculture, education and even social welfare.”

He fears that there will be more confrontations if the mining company doesn’t change its practices.

“Otherwise, I’m afraid for the stability of Koidu City,” he said.

In 2016, months after the lawsuit was filed, the central government suspended Mayor Lamina from office amid allegations of financial mismanagement within Koidu City. An audit found a handful of administrative infractions, including an employee who carried city checkbooks with him on holidays and about $8,500 in unaccounted payments to contractors and third parties. No specific charges were made against Lamina.

Lamina says the suspension is an effort to silence him. Media reports suggested that the order came from the office of President Ernest Bai Koroma.

“The lawsuit did not go down with my political superiors,” Lamina told ICIJ.

A spokesman for the president told ICIJ the suspension was a “local council issue,” and that the president’s office had no involvement.

Shortly after the end of Sierra Leone’s civil war, Koidu’s diamonds first appeared in the Panama Papers  in 2002, when records indicated that the Steinmetz family’s private foundation signed off on a deal to pay $1.2 million to buy half of the mining license issued by the national government for the Koidu mine.

Koidu Limited became one of Mossack Fonseca’s busiest mining industry customers, with hundreds of emails and attachments sent over more than a decade that detail mundane to urgent administrative tasks, accounts at five banks in Sierra Leone and London and a flurry of loans worth $170 million.

The Sierra Leone mining company is one of more than 130 companies linked to mining mogul Benjamin Steinmetz, and the company that sits at the top of his corporate empire, BSG Resources, according to the law firm’s internal files.

These companies include diamond mine operators, traders and polishers in Namibia, Botswana, Angola, Liberia and the Congo. One company, Diacor International Limited, reported producing a variety of diamonds, including some in “fancy colours.” The records indicate that Diacor booked more than $1 billion in sales each year from 2011 to 2013.

In August 2014, authorities in the British Virgin Islands ordered Mossack Fonseca to provide hundreds of pages of correspondence, payments, meeting minutes, financial transactions and more from three companies in relation to a criminal investigation into BSG Resources.

The inquiry related to allegations that people connected to BSG were being investigated in multiple countries for bribes paid to secure mining rights in Guinea. In documents later shared with Mossack Fonseca, BSG’s lawyers confirmed that it was under investigation by authorities in Britain, Switzerland and the United States. It also challenged the government of Guinea on the grounds that they unlawfully stripped BSG of its mining rights.

BSG Resources declined to answer specific questions for this article. The company said that “it uses offshore companies and related structures as part of its legitimate and fiscally responsible tax planning,” and that it discloses information when required. BSG told ICIJ that it has “no familiarity” with “a very large number of companies” – the 131 Mossack Fonseca companies that appeared connected to Steinmetz and BSG within the law firm’s files.

One of the two demonstrators who died during the 2007 protest against Koidu Limited was Aiah Momoh, a 30-year-old father of three girls. His tombstone says Aiah died “during a peaceful demonstration … against Koidu Holdings S.A. Limited for corporate abuse of community rights.”

While the company’s operations were briefly halted by the government, a commission of inquiry later cleared the company of blame, saying that the security officers who killed the protesters were not under the authority of the company.

“Aiah was taking care of us,” said his mother Sia Momoh, sitting on the floor of the family’s mud brick house spinning cotton.

“I don’t pass by the junction where his grave is,” said Yei Momoh, Aiah’s sister. “It is a constant reminder of our plight. Aiah was just all we had in this family.”

In 2015, the community took its grievances from the streets to the courtroom. After years of unheeded requests for payment, the Koidu city council sued Koidu Limited’s parent, Octea Limited, claiming that the company owed $684,000 in unpaid property taxes.

Mayor Lamina wrote in an affidavit that Octea Limited “deprived my community of the much needed resources to undertake development activities … I believe the community that owns [its] resources cannot be deprived of benefiting from their own minerals and have to go cap in hand begging.”

Koidu maintained that it was exempt from taxes but that it was committed to its corporate social responsibilities.

In April, four days after the release of Panama Papers, Justice Bintu Alhadi of the High Court of Sierra Leone ruled that Octea and Koidu Limited were separate entities and Octea was not technically the mine’s owner. As a result Octea had no duty to pay property taxes.

“The secrecy of tax havens and the complexity with which companies can arrange their businesses makes it difficult for developing countries to get a fair deal in the share of revenue from their natural resources,” said Tatu Ilunga, a former tax lawyer and senior policy advisor on tax for Oxfam America.

Lamina, who says that he believes that central government doesn’t have the power to suspend him from the mayor’s office, continues to operate as if he is still mayor. He believes he will soon be reinstated and said that the city plans to appeal the judge’s ruling in the property tax case.

“I started seeing myself as a lone ranger,” Lamina told ICIJ. “But, as it turned out, the support of the people in Koidu [is] encouraging in fighting for the cause of the people.”

This piece is a collaboration between The GroundTruth Project and the International Consortium for Investigative Journalists (ICIJ), by Silas Gbandia, Khadija Sharife, Will Fitzgibbon, Cooper Inveen and Michael Hudson of ICIJ.