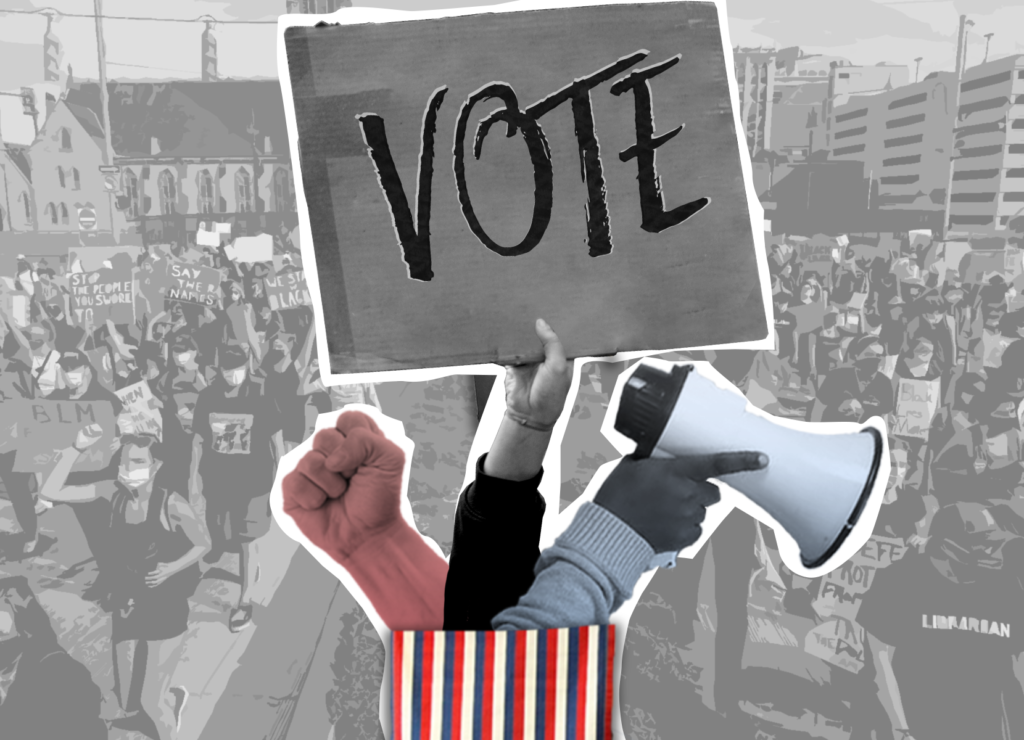 The legacy of activism in the Motor City

DETROIT — “Baba” Baxter Jones, a 64-year-old veteran activist with salt-and-pepper hair, powered his wheelchair to the front of the crowd. Hundreds of people, mostly young, some with children at their side, gathered at a park outside police headquarters on Third Street that afternoon in early June, the city’s 10th straight day of demonstrations against police brutality. The last time Jones witnessed this level of sustained unrest in his country was 1967 and Detroit was on fire.

Jones, a water and disability rights activist, recalled the roiling days of the Civil Rights Movement, when he was a Black boy growing up in the city. He then made an admission to the hundreds of people surrounding him: his generation had gotten too comfortable. “The problem that we made, the error that we made in the 60s,” he said, his voice booming from the microphone,“is we let up.”

He pointed to a Black boy at the protest with his mother, and summoned him forward. People began recording on their phones as Israel Timmons, 10, came eye-to-eye with the man in front of him. Together they formed a kind of mirror image; Jones was just one year older than Timmons when riots convulsed Detroit in ‘67. “I’m apologizing to you today that we even have to go through this,” he told Timmons, his cadence reminiscent of a preacher’s sermon. “We should’ve had this taken care of a long time ago. I promise you, I promise you, we gon’ make this better. All of these people out here today, we gon’ make this better.”

With this solemn promise, Jones asked the next generation to carry on the fight. This summer’s civil unrest—ignited by the recorded killing of George Floyd in police custody and fueled by long-standing systemic inequality—marks a dramatic shift in public opinion on racism in the United States, in which the majority of Americans now support the Black Lives Matter movement. It is already driving legislative and electoral change at one of the nation’s most critical junctures in recent history, ahead of a presidential election in November. In Detroit, voting rights advocates are using the momentum to mobilize under-engaged groups, conduct community outreach and registration drives, and get people to the polls.

“Everybody talked about taking [their work] to the next level,” said Rev. Dr. Wendell Anthony, Detroit’s NAACP president, referring to mobilization at a recent rally. “…Because if you don’t do that, then we’ll still be back doing the same thing again. I think that message is resonating around the country. Everybody’s pushing the voting process.”

For leaders like Wendell Anthony and “Baba” Baxter Jones, the momentum harkens back to their early days fighting for civil rights, but they also note a significant difference in today’s movement.

“We are seeing our white counterparts participate in new levels and in new ways,” said Jennifer Disla, organizing director for Detroit Action, a grassroots group that works to build power among Detroiters of color. Disla said white allyship will be key at the ballot box. “Black and brown communities can’t do it alone.”

The Voting Rights Act of 1965 was the first federal legislation to outlaw intimidation and other barriers to voting of African Americans and other racial minorities. Since that victory of the Civil Rights Movement, Black Americans have had the highest voting rate of any racial group in the nation. Fifty-five years later, Voting Rights Act enforcement is newly fraught. In 2013, the Supreme Court rolled back a key provision of the act, ending federal oversight of election laws in states with a history of discriminatory practices.

The Black vote has proven pivotal in national elections, and Black Americans will be a critical demographic of 2020’s heated presidential race, especially in battleground states like Michigan. Nationally, according to a Pew Research Center analysis, turnout among Black voters dropped from a record high of 66.6% in 2012 to 59.6% in 2016. Meanwhile, Michigan’s Black voter turnout fell by 12 percentage points over the same period, as opposed to 4.7 points nationally.

Voting rights advocates across the country believe the public killing of George Floyd and the grief aired in its wake may catalyze voter turnout.

Anthony asked the crowd at a recent protest in Detroit for a show of hands: how many of them planned to vote? Most—at least 90%, he said—raised their hands. To those who weren’t yet registered, Anthony pointed to a booth to sign up.

Detroit’s “long, hot summer of 1967” also erupted over grievances of police brutality, marking one of the most violent civil disturbances in American history. The assassination of Dr. Martin Luther King Jr. in 1968 brought the country to a further reckoning with racism that has not been seen again until now. Detroit’s residents, 79% of whom are Black, have been frustrated about issues like residential water shut offs for unpaid bills and barriers to economic opportunity for years, well before Floyd’s death reverberated around the world. The COVID-19 crisis laid bare systemic inequities as the virus has taken a disproportionate toll on Black lives. Floyd’s killing in police custody marked another trauma.

“This is how the ‘67 riots started; it didn’t just happen,” said Ponsella Hardaway, executive director of the Detroit-based nonprofit MOSES, which develops faith-based leaders in civic engagement, community organizing and get-out-the-vote efforts. “I think this is just a boiling point,” she said.

Floyd’s death in Minneapolis has newly galvanized Detroit’s community and the nation, this time into a social movement of unprecedented reach.

“We’ve been oppressed for way too long. We want to be heard. We want to be counted,” Detroiter First Mutimura, who is 34 and Black, said as she marched during a recent protest in Detroit. She believes frustrations shared by young people will translate to strong voter participation. “You’re going to hear us whether you like it or not.”

The energy of young protesters is not only spilling over to the polls, it’s influencing more traditional, dedicated voters, too, said Cliff Albright, co-founder and executive director of the Black Voters Matter Fund, an Atlanta-based nonprofit that works to boost Black voter turnout through policy advocacy, organizational training and voter registration.

“I don’t think I’ve ever seen people banging on the windows at a polling place demanding that they open the doors,” Albright said, referring to the June 23 primary in Louisville. “I feel that that’s a reflection of the period that we’re in, of the spirit of protest.”

So last month, when he learned of 127 protesters in Detroit who were arrested in a single night and returned to march the next day, he recognized their commitment.

“That’s when I knew that I had to get involved because I knew they were serious,” Jones said.

Jones joined several hundred young protesters who converged with elder activists in June at the former site of the Algiers Motel, on Woodward Avenue. It was the same spot where, on the third day of the ‘67 rebellion, police stormed the Black-owned motel and shot three Black teenagers, Carl Cooper, Fred Temple and Aubrey Pollard. The three white Detroit police officers implicated in the now-infamous slayings were never convicted. So when protesters gathered at the site last month, Jones and other elders told them that a straight line of history runs from the Algiers Motel to the killing of George Floyd. It was their turn to take up the mantle.

Angie Jackson is a Report for America corps member, covering criminal justice for the Detroit Free Press. This dispatch is part of a series called “On the Ground,” supported by The GroundTruth Project. Follow her on Twitter: @AngieJackson23.