Despite Talk of New Funds for Climate Change, Rich Nations Are Only Diverting Development Aid 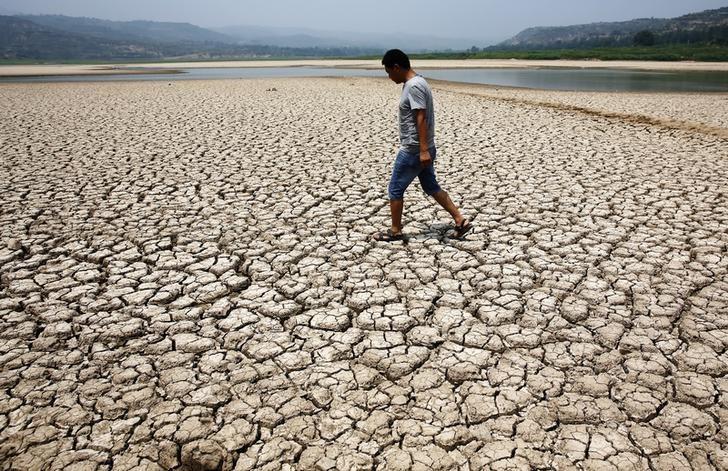 A man walks through the dried-up bed of a reservoir in Sanyuan county, Shaanxi province July 30, 2014. (Photo by: REUTERS/Stringer/Files)

Kochi: Despite their promises, developed countries have not committed new and additional funds to developing countries to help them deal with climate change, found a new report released on June 23.

Instead, developed countries are diverting funds meant for development – including those meant for poverty eradication – for the climate cause.

The June 23 report by the Climate Change and Resilience Information Centre (CARE), an international humanitarian aid organisation, found that these countries have diverted as much as $103 billion in this manner. This is a problem because it takes funds away from activities that would have helped countries achieve specific Sustainable Development Goals (SDG), which are also key to tackling climate change in a just and equitable manner.

India has repeatedly highlighted the need for climate finance for developing countries. That developed countries are not delivering new funds as promised is “unsurprising”, climate scientists said. The report recommends several steps, including instituting clear definitions of what “new and additional” funds mean, to put climate finance back on track.

Climate finance, according to the United Nations Framework Convention on Climate Change (UNFCCC), is funding drawn from public, private and alternative sources that helps support mitigation and adaptation actions to address climate change.

Adaptation actions are those that help people adjust to the consequences of climate change. Mitigation measures, on the other hand, refer to actions that help mitigate the effects of climate change – such as stricter policies to decrease carbon emissions.

At COP15 in 2009, developed countries promised to deliver funds amounting to $100 billion by 2020 to developing nations to both adapt to and mitigate climate change.

However, this would not be possible before 2023, found the Climate Finance Delivery Plan unveiled at COP26 last year, which charted out an agenda and a timetable for developed countries to deliver this climate finance. Additionally, these countries are supposed to contribute the same amount every year, until 2025.

“Progress on the alignment of financial flows towards the goals of the Paris Agreement remains slow and tracked climate finance flows are distributed unevenly across regions and sectors,” the report noted, confirming that rich countries had not achieved their specified target of climate finance by 2020.

Analysing country-wise data on climate finance reported to the UNFCCC, CARE found that 23 developed countries – including G7 nations, such as the United States – provided public climate finance worth $220 billion between 2011 and 2018.

Only three countries – Luxembourg, Norway and Sweden – have consistently surpassed this commitment.

Even if the bar is dropped further and all funds promised are considered ‘over and above’ the development finance that rich countries contributed in 2009, developed countries have still contributed only $99 billion as climate finance.

According to the report, this diverting of funds meant for development towards climate finance, is a concern because it means less funds will be available for developing countries to achieve SDGs – a set of 17 targets (such as attaining gender equality and poverty eradication, along with conserving the environment) to achieve sustainable development by 2030.

“It is quite shocking to see that the world’s leading nations do not care about their international commitments to support climate and development in poor countries,” said co-author of the report, John Nordbo, CARE International, in a press release. “Instead of being the backbone of global governance, these countries, in reality, undermine international cooperation and create mistrust in the rest of the world.”

The report recommends that developed countries honour their obligations to provide $100 billion in climate finance to developing countries and not club it with development funds. A clear definition of what constitutes “new and additional” finance is also crucial, it added.

“We have known this for some time but it’s good to know the exact numbers through the report,” he said.

The clear decrease in official development assistance affects not just India, but is “deleterious” for all developing countries, he added. However, the impact of this on smaller countries is far greater because they have fewer means of obtaining climate finance.

He also acknowledged that the definitions surrounding climate finance are still under negotiation and, indeed, need to be clarified. India has held that these lack of such definitions is an issue, he said.

In the recent past, developing countries, including India, have highlighted the need for urgent climate finance to tackle the impacts of climate change. India’s Union environment minister, Bhupender Yadav, in the run-up to COP26 in November last year, said that rich countries have “an obligation, responsibility, duty and a vow” to provide climate finance to developing nations and should deliver on their unfulfilled promise to raise $100 billion a year, The Hindu reported.

Speaking at the Raisina Dialogue in April this year, Yadav said that developed countries have been unable to fulfil their climate finance pledge to developing countries.

In May, at the BRICS meeting on climate change, Yadav reiterated that the implementation of climate actions by developing countries depends on the adequate delivery of climate finance, technology transfer and other support.