Despite a show of Olympic unity, many South Koreans remain skeptical of North Korea 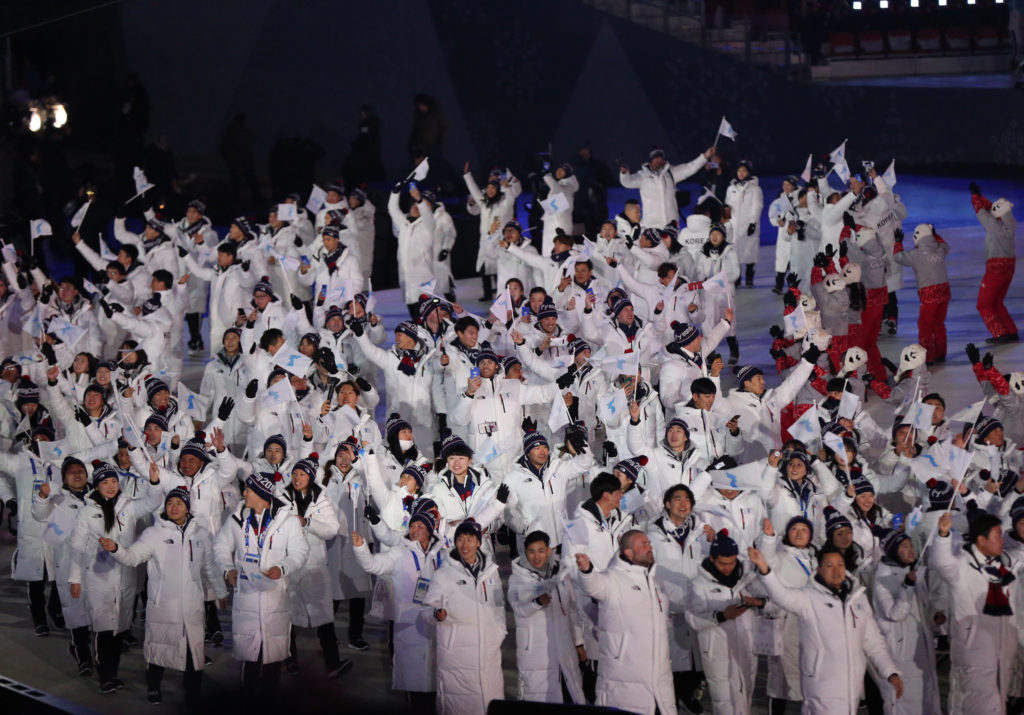 PYEONGCHANG, South Korea — After watching the opening ceremony of the Pyeongchang Winter Olympics on Feb. 9, I camped out at Jinbu station — the train station closest to the stadium — and asked passersby what they thought of the show. The vibe among foreign visitors was definitive and palpable: Almost everyone I interviewed said that seeing the two Koreas march together under one unified flag was the highlight of the night. Several explicitly called it “witnessing history.”

They’re not wrong. For the first time since the end of the war in 1953, North Korea sent a member of the Kim family — Kim Jong Un’s younger sister, Kim Yo Jong — to South Korea. They also sent Kim Yong Nam, one of the highest-ranking North Korean government officials ever to visit, though his presence was largely overshadowed by the mystique of “North Korea’s Ivanka Trump.”

The days that followed had all of the elements of a good story: fluttering hopes of peace between two long-divided nations, plus an unprecedented invitation to Pyongyang for South Korean President Moon Jae-in. Then there were the juicy play-by-plays of Mike Pence’s passive-aggressive behavior toward the North — which included shaking everyone’s hands but Kim Yong Nam’s at a dinner and carefully angling photos so that his head covered Kim Yo Jong’s at the opening ceremony.

Very quickly, the harmony started to look like a wedge driven between the U.S. and South Korea. As Moon Jae-in pulled every stop to foster good relations with the North, Pence promised the “toughest” sanctions yet.

This is one of the many symbols of peace flexed during the Opening Ceremony. Incredible experience. #2018Olympics pic.twitter.com/p426pNtc00

But South Koreans were long skeptical of what North Korea’s presence in Pyeongchang could bring. Unlike the foreign spectators I interviewed, South Koreans are used to the nearly 70-year rollercoaster relationship with the Kim regime. As Lee Young-min, a 23-year-old college student from Seoul, put it: “It’s all political maneuvering. [North Korea] is trying to weaken economic sanctions against themselves and soften their national image.”

Some Koreans have painted Moon Jae-in as overeager and gullible for accepting North Korea’s last-minute RSVP to Pyeongchang. A late-January visit from North Korean singer and Korean Worker’s Party member Hyon Song Wol already sparked controversy, as did the decision to combine North and South Korean athletes onto one women’s hockey team. And those who had cast doubt on North Korea’s true intentions were likely reveling in validation on Feb. 14, when South Korea’s government agreed to pay the$2.6 million bill for North Korea’s 500-person entourage of cheerleaders, performers and propagandic journalists.

The North Korean cheerleaders/singers were sometimes so enthusiastic that they were the only people we could hear in the stadium. #winterolympics #openingceremony pic.twitter.com/cp93rYsTFp

“This is exactly what we should expect from North Korea,” said Park Jae-jin, a retired office worker from Seoul. “They come here, they smile and clap, then they send us a surprise bill after the fact. We look like fools.”

“It’s hard to know whether North Korea’s actions are truthful, or if they’re a form of political maneuvering,” said Jeong Yu-jeong, a university student in Seoul. “It takes minimal effort from North Korea to calm down its recent behavior, and it seems like they are trying to de-escalate the missile tests, Otto Warmbier’s death and criticism form the U.N.”

Anti-North Korea and anti-Moon Jae-in protesters are in the mix at the Pyeongchang Olympic Plaza. #2018Olympics pic.twitter.com/5YrxGSKPGi

To Moon’s benefit, no one knows what the future holds — and to some, the Olympics are just Moon’s way of damage control after a tough summer with Trump. Some believe that Moon had no choice but to welcome North Korea to the South’s expensive, hard-earned games — especially in a time when the U.S. president is hedging his bets toward war.

“Trump’s involvement so far has been wrong. It’s too one-track minded and too focused on [stopping] nuclear weapons development,” said Lee Mee-seop, a Seoul-area resident. “His threatening attitude makes us feel uneasy about living here, and he excludes us from important conversations. We don’t know who Trump really is.”

Nevertheless, as the Olympic Games reach their middle mark, it’s clear that the South Korean government is still clinging to hopes of peace. Rows of unity flags depicting the whole Korean peninsula flap in the wind outside of the newly-built sporting venues, and the voices of North Korea’s professional cheerleaders still overtake the stadium at joint games.

The unity flag is all over the place in Pyeongchang today, and I bet you Kim Jong Un’s sister saw one somewhere. #PyeongChang2018 pic.twitter.com/sBvEDM7N9H

But behind all that glitz and glam, conflict — as always — still quietly hangs in the balance. Susan Thornton, the acting assistant secretary for the U.S. State Department’s Bureau of East Asian and Pacific Affairs, made that perfectly clear during her testimony on Feb. 15: “Our preference is to achieve denuclearization of the Korean peninsula through diplomatic settlement,” she said, “but we will reach this goal one way or another.”

Jisoo Hong contributed to this report.