Despite a sale and layoffs, West Virginia newspaper continues its tradition of ‘sustained outrage’ 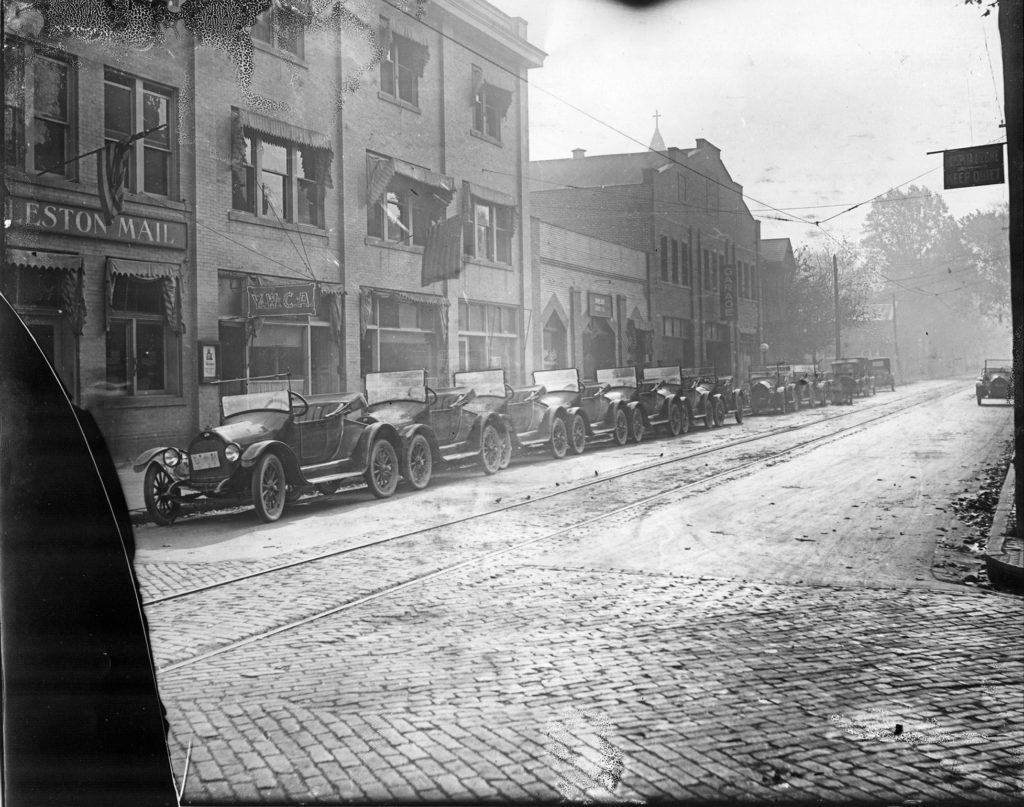 Virginia Street at McFarland Street, circa 1912. The Charleston Daily Mail, at left, moved across the street in 1927 into the building it currently occupies. (Archival image from Charleston Gazette-Mail / Courtesy of James D. Scarbro Jr.)

CHARLESTON, West Virginia — This town’s daily newspaper, the Gazette-Mail, is housed in a classic 1920s building made of steel, brick and Indiana limestone. On the banks of the Kanawha River in downtown Charleston, the Gazette-Mail was formed in 2015 by the merger of two papers, the Charleston Gazette and the Charleston Daily Mail. The Gazette’s late owner, William E. “Ned” Chilton III, became famous for his motto “sustained outrage.”

For more than a century, the Gazette pursued a crusading spirit that, as the newspaper website proclaims, “was either feared, hated or loved by those it covered.” It took on big coal and corrupt politicians and it embodied the great spirit of American newspapers, right through to last year when the paper won the Pulitzer Prize for investigative reporting for its series on the opioid epidemic in West Virginia.

The staff and its editors like to say it’s a “reporter-led” newsroom, and I loved the place the minute I first walked in as an intern. In December when I accepted a full-time reporting job there through Report for America, I felt like I landed the perfect first job in journalism. I was assigned to work in Appalachia and specifically in the southern coalfields of West Virginia, a region I’d grown to love over the last five years.

But just two weeks into the job, the Gazette-Mail filed for Chapter 11 bankruptcy. Employees were immediately notified that layoffs could come in the next 60 days. The proposed buyer at the time held a reputation for paring down newsrooms, leading us to believe at least a few reporters and editors wouldn’t be there in two months.

A different buyer stepped up at the last minute, and the sale was finalized on April 1. Not everyone in our newsroom made it through the transition.

In the middle of the newsroom, our former executive editor Rob Byers’ desk sits bare. He was one of several people who weren’t brought on board for the paper’s next chapters. Old newspaper clippings still hang on the bulletin board behind his desk, one announcing reporter Eric Eyre’s Pulitzer, and another from when former coal baron Don Blankenship was put behind bars, just a few of the dozens of things he witnessed in his 25 years at the paper.

On his file cabinet there is a sticker from The Daily Athenaeum, West Virginia University’s student newspaper, where he worked in college, as did I.

Rob also started at the Gazette as an intern, and worked his way through the ranks. He cleared his desk out late one evening, after the staff had gone.

The halls of the newsrooms that Rob departed tell the history of a newspaper industry on hard times. For decades, the Gazette and Daily Mail were competitors, across the hall from each other. Reporters for both still share stories about running into competitors in the narrow, yellow hallways when news would break, and rushing to be the first to get the story.

Now, the Daily Mail newsroom sits empty. Desks are dusty and stacked with files that haven’t been touched in years. Reporters who joined the consolidated paper moved to the Gazette side of the building. Others were laid off or left of their own accord. The whole building feels like it holds a history of a faded newspaper industry struggling to keep up in a digital age.

Not a time to feel sorry for ourselves

The days after the bankruptcy — before we knew about layoffs or new management or anything of that sort — there was a hush in the newsroom, even if everyone was keeping busy.

As reporters made phone calls and conducted interviews — because everyone still had work to do — it was impossible to ignore condolences passed along from sources. Calls now had an added layer of “thank you for the kind words, yes we’re very upset too, no we aren’t sure what’s going to happen,” and so on.

“It really is like someone died,” one editor remarked.

For many, it seemed like wading through a personal loss. For me, who had only spent a few months in the newsroom compared to decades, it was a bit different.

In college, the Gazette and the Daily Mail both were inspirations of sorts. The papers were my introduction to local, accountability reporting. In the brief encounters I had with reporters who worked at the outlets, their dedication was tangible and their passion contagious.

When I started working there, I got to witness the other side of that. I was able to understand better why reporters here do the things they do, despite the frustrations, and the sometimes larger-than-life issues they’re tasked to cover.

These big things are a part of their lives. They live with the consequences of overwhelming situations just like their neighbors and friends do, and they get to see the forces working to better things in Appalachia, a region many others outside often like to use as a punching bag or the butt of a joke.

Speaking truth to some of the powers here is a responsibility that, at times, seems to swallow you. That’s why I wasn’t all that surprised by the resiliency of this newsroom when things got difficult — and they were difficult.

‘The whole building feels like it holds a history of a faded newspaper industry struggling to keep up in a digital age.’

News of the bankruptcy came in the middle of the West Virginia legislative session, and just as teachers from three of the state’s 55 counties participated in the first organized walkouts that would eventually culminate in a historic weeks-long strike for all the state’s teachers and school personnel.

It wasn’t a time to feel sorry for ourselves or worry about what we couldn’t control or didn’t know. What we did know was that news was happening, and it was our responsibility to cover it as diligently as we would have at any other time.

The state was flooded with national outlets looking for the “true story” of West Virginia’s struggling, working class, but in our newsroom we knew the story.

We know the people. And we know their struggle. We don’t have to look for it; we see it every day.

Around an already contentious legislative session and thousands of teachers flooding the city for days on end during the strike, the reporters were also thinking about the duration of their careers in Charleston. They knew they could be out of a job any day.

The funding from Report for America means I have this position for a year. As the most junior member of the staff, I felt lucky, but I was also concerned for my colleagues — particularly those with long histories at the paper.

Some of my colleagues were filling out applications and even interviewing for other jobs, but still, the paper marched on. Reporters continued, some working 12-hour days or longer. Editors stayed late to keep up with the stories. The work was persistent and crucial — making sense of situations that, at times, made little to none.

In the midst of all this, there was no phoning it in. There was no giving up on telling the stories of the people in this state. Ultimately, I believe, they are who we answer to, who we are responsible to, and to who we are committed.

The reporters here proved that by putting the needs of the people — the readers — before their own throughout all of this. The public good was always a priority, and I truly think — even if layoffs did come — those reporters would have still been up every day, talking to teachers and getting the out necessary information.

The reporters at the Gazette-Mail, including this one, will continue to keep up with their beats, meet their daily deadlines and report the news for the goodness of the people in West Virginia — as they’ve been doing. To put it simply, we will continue doing our jobs, because news in this state doesn’t stop, so neither will we.

Caity Coyne is a Galloway Fellow, part of our central Appalachia reporting project which is made possible by the Galloway Family Foundation.