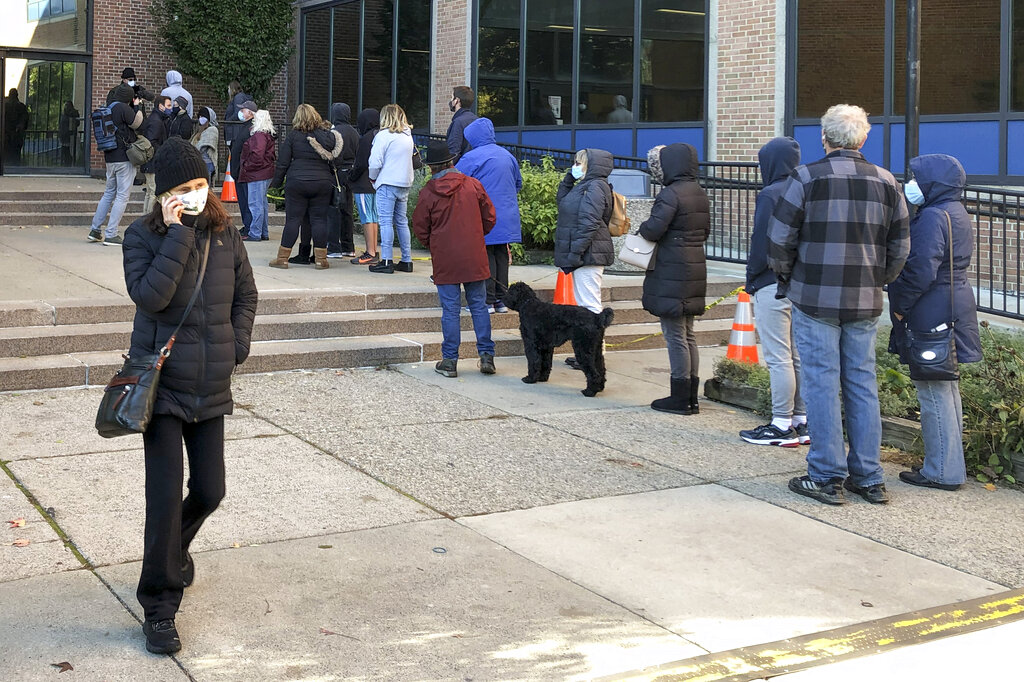 Voters wait in line outside the Bucks county government building in Doylestown, Pa., a suburb of Philadelphia, on Monday, Nov. 2, 2020. Some said they received word that their mail-in ballots had problems and needed to be fixed in order to count. (Photo by Mike Catalini/AP Photo)

The signs seem to face off in every direction – a house with a Trump flag across from a neighboring lawn with a Biden sign. Some boast support for local candidates like Rep. Brian Fitzpatrick, or his challenger, Christina Finnello, and mingle with Halloween decorations and piles of fallen leaves. In the state’s southeastern corner –the most contentious county in Pennsylvania – it’s easy to see why Pennsylvania is considered the lynchpin of the election.

Wedged between the City of Brotherly Love to the west and the Delaware River to the east, Bucks County is made up of both rural areas and more densely populated communities, where voters turned out in droves on Tuesday even though this year was the first that all Pennsylvania voters were given the option to vote by mail.

“It was the most turn out I had ever witnessed and it was a steady stream of voters the entire day,” said Heather Mentz, former Judge of Elections of the Middletown Lower 1 precinct in the Parkland section of Middletown Township.

In past elections, emergency absentee ballots have been used in the commonwealth only for those who were unable to vote in person. This year, for the first time, all Pennsylvania voters are entitled to mail-in ballots, which are among the 326,000 still being counted across the state. Of these, 28,000 mail-in ballots are still being processed by Bucks County poll workers.

According to Votes PA, the law in Pennsylvania states that mail-in ballots must be postmarked or dropped off at a secure location by 8 p.m. on Nov. 3. Additionally, “The Pennsylvania Supreme Court allowed ballots postmarked for Election Day that arrive at the Board of Elections office up to three days following the election to be counted.”

But yesterday the Trump campaign sued to stop the counting of votes in Pennsylvania.

“Pennsylvania is going to count every vote and make sure that everyone has their voice heard,” a statement released by Governor Tom Wolf read.

The increase in ballots coming in by mail created a need to adjust the procedure used by Bucks County to process those votes, including use of the county courthouse in Doylestown. A large staff is tasked with checking in and opening ballots, as well as being on the lookout for “naked” ballots – those missing the secrecy envelope. These ballot counters are paid employees, many of whom are from various county departments, according to Patrick Long, a poll watcher for canvassing the absentee and mail-in ballots for the Bucks County Republican Committee.

In previous years, as the county received absentee ballots, they would be sent to the individual precincts to be opened and processed by the local Judge of Elections and nonpartisan poll workers once the polls closed, Long noted.

As a poll watcher this year, Long was able to visit the room in the courthouse where the process was taking place. There were “attorneys on both sides,” he said, “you had Democratic attorneys, you had Republican attorneys, you had volunteers from other campaigns – everyone had a right to be in the room to watch the process.”

In speaking with Long about the ballot counting extension, he believes the question could be whether or not the state Supreme Court allowed the additional three days, “against the wishes of the state legislature.” Then again, margins in Pennsylvania may be so big that it ultimately doesn’t matter. Historically, the larger, more populated and diverse counties of Allegheny and Philadelphia have carried the vote.

“If you have a candidate up by 100,000 votes and there are only 50,000 ballots in question for those three days, the Supreme Court may not even want to take up the issue,” Long added.

With ballots sent directly to the county this year, and while managing the large crowd of in-person voters, poll workers needed to track mail-in ballots, approximately 28,000 of which remain uncounted as of Thursday. In Philadelphia County, just over 4,000 were left on Thursday afternoon. Approximately 300 miles to the west in Allegheny County, ballot counting halted due to a court order.

In Bucks, former Judge of Elections Mentz noted that she and current Judge of Elections at Middletown Lower 1, Mike Young, had to create a detailed system for tracking mail-in ballots to keep in-person voting flowing on Election Day.
“We spent a couple hours the day before [Election Day] going through our book of registered voters and comparing it to the lists of both ballots requested and ballots returned that were provided to us by the Bucks County Board of Elections,” Mentz said.

She and Young created this system so that going into Election Day, they already knew which voters requested and then returned mail-in ballots, and which voters requested but did not return ballots. Mentz declared, “We would have been totally sunk with the volume of voters that came through if we had not anticipated and prepared for those issues.”

On Tuesday, the “Trump Store” in Bensalem, Bucks County, posted to their Facebook page, “This is the most important election ever!” On the “Bucks County United for Joe Biden” page, a member posted tips for those voting day-of, including, “Be prepared to wait. Dress comfortably, give yourself time, bring a snack, and wear a mask.”

“There seemed like a level of controlled excitement,” said Mentz about Election Day. “Like we were in the process of making history.”