ON THE GROUND IN NASHVILLE, TN

Through despair and unity on streets of Nashville, an American reckoning 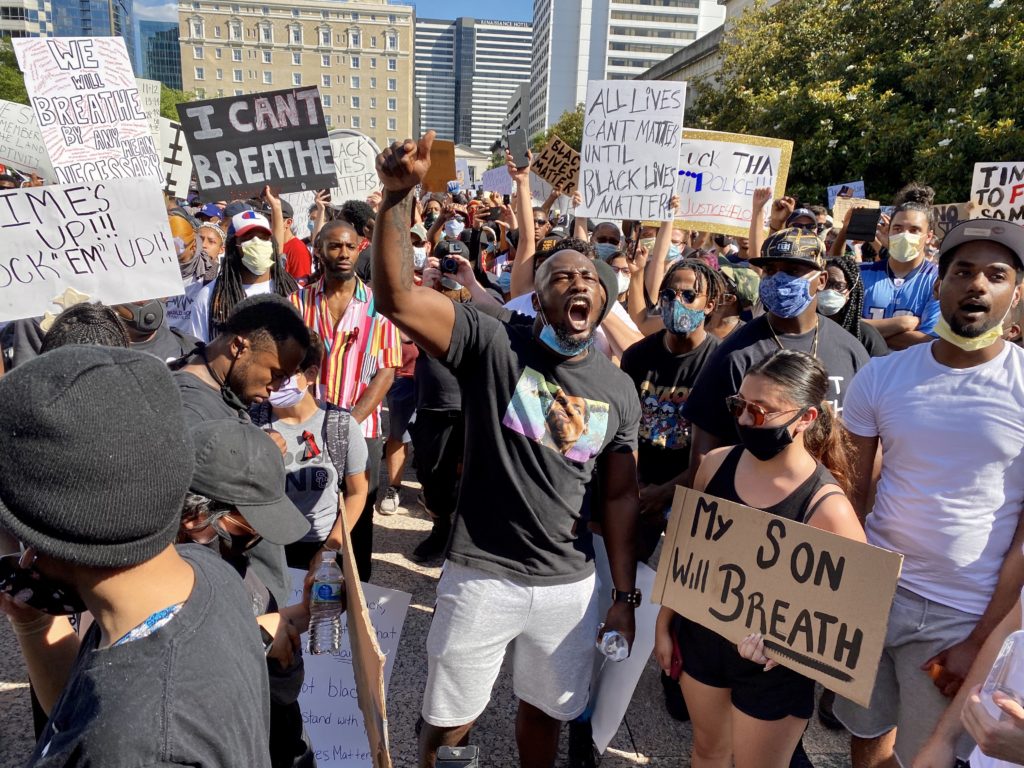 Demonstrators rally during a George Floyd protest downtown Nashville, Tennessee on May 30, 2020. (Photo by Samantha Max/GroundTruth)

NASHVILLE — On Saturday, I stood among a sea of peaceful demonstrators outside the state Capitol, rallying together with signs and face masks to protest the death of George Floyd.

Like so many other cities across the country, Nashville has been engulfed by a sense of deepening despair as one headline after the next announces to the world that a black life has been taken at the hands of police. And as my colleagues and I marched through downtown, juggling audio recorders and cameras and cell phones, documenting every passing moment in photos, interviews and tweets, I saw that despair. That pain. That fear. It was coursing through the crowd as police officers stood guard, some with batons or riding on horseback, others in full out riot gear.

I also saw strangers hugging in the middle of a pandemic, officers and demonstrators having calm, thoughtful conversations. Workers and customers at honky tonks on lower Broadway spilling out onto the sidewalk, cheering on the marchers as country music filled the street.

But like in so many other cities, the evening devolved into chaos. A small number of protesters tagged buildings with graffiti, smashed police cars and threw punches. By nightfall, City Hall was burning. Tear gas was flying. The mayor declared a state of emergency.

A few days have passed since thousands of people filled the streets of downtown Nashville, calling for change. And now, I, and so many others, find myself asking, what’s next?

Last night, I was talking on the phone with my grandmother. Her father boarded a ship to Ellis Island more than a century ago, to escape pogroms and discrimination against Jews in eastern Europe. By the time my grandmother was born, our family had settled in Baltimore, a place where, for decades, Jews and African Americans were forced to the edges, united in their sense of exclusion.

When my dad was born in 1966, things had started to change. A year earlier, Rabbi Abraham Joshua Heschel marched arm in arm with Dr. Martin Luther King, Jr. and thousands of others across Selma’s Edmund Pettus Bridge. It was a moment of racial and religious unity that lives on in countless Jewish history books, a moment when two groups who knew what it meant to be “the other” joined together as one.

And as the Civil Rights Movement changed Baltimore’s landscape, so too did the city’s Jewish community as they started moving to the suburbs in droves, leaving their black neighbors behind. And my family moved right along with them.

To put it frankly, I was raised in that bubble of that abandonment. I grew up five minutes from the city line, but for much of my childhood I was completely oblivious to the pain, the inequity, the systemic injustices devastating black lives just down Interstate-83.

For years, I’ve been trying to catch up. Reading work by Baltimore writers like Wes Moore, D. Watkins, Ta-Nehisi Coates. Most importantly, though, I’ve conducted hours of interviews with Ginny, the 91-year-old black woman who helped raise my father before she did the same for me, my brother and my cousins.

Ginny is like a grandmother to me. And through her stories, I’ve seen Baltimore’s evolution through the decades: living on a farm with 13 siblings; the years she wasn’t allowed in downtown department stores without my grandmother, a white woman, by her side; all the hours she spent waiting for the bus, to shuttle her to and from the suburbs for work.

This is the history that tints all the lenses through which I see the world. And the ways in which I maneuver through it as I spend my days writing stories about officer-involved shootings, protests, tensions between the police department and community members.

I’m self-interrogating, thinking constantly about my countless blind spots as a white female journalist, as a criminal justice reporter covering a system that disproportionately impacts people of color. A system that seeks to dehumanize.

And I’m also thinking about the privileges I hold as a white female journalist. I’m thinking about how I can share stories that are often brushed aside to elevate voices that are often ignored. They talk, they chant, they shout, they scream. And it’s far past time for us to listen. And to do something. To be on the streets with our recorders and our notepads, along with the hundreds of thousands of Americans across the country, raising their voices, calling for justice, pleading with us to let them breathe.

So while I was on the phone with my grandmother last night, telling her about the protests and the hurt and the fear and the rage bubbling deep inside the thousands of demonstrators I marched with, she said to me, “I can’t believe they haven’t done something about this yet.”

This is on us. I don’t know why it’s taken white people this long to open our eyes and bear witness to — and take responsibility for — the suffering of our fellow Americans. There’s a mountain of history that landed us in this exact moment, history that we can’t ignore. White Americans can’t hide from this legacy or get in the way of change any longer. It’s on us.

Growing up in a Jewish household, one of the guiding principles my parents instilled in me is a concept called “Tikkun Olam,” which translates to “Repair the World.” The phrase comes from a sacred Jewish text called the mishnah. But in modern times, it plays a central role in progressive Judaism. And the idea is this: no one can fix the world on their own. But that doesn’t mean we shouldn’t each do our part.

But I will seek the truth. Shed light on injustices. Hold leaders and institutions accountable. I will share stories that help us see the humanity in one another. Because once we can truly see each other, we can also see ourselves.

Samantha Max covers criminal justice for Nashville Public Radio. From 2018-2019, she was based in Macon, Georgia, covering health and inequity at The Telegraph. This essay is part of a series called “On the Ground,” supported by The GroundTruth Project. Follow her on Twitter @samanthaellimax.