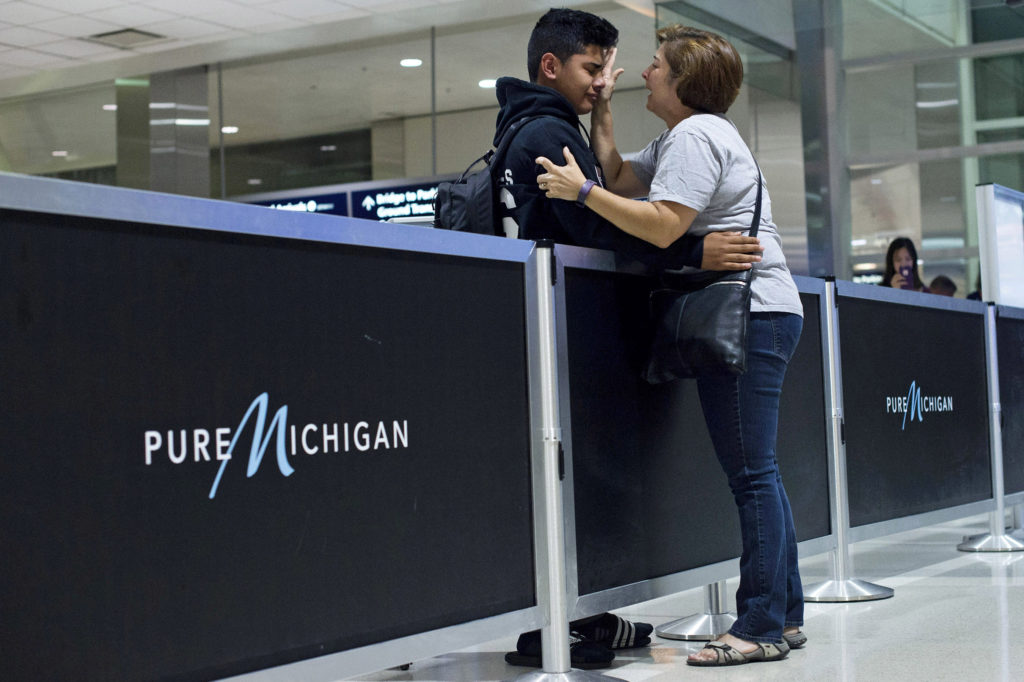 Bryan Quintana-Salazar, 13, cried as his former teacher, Jennifer Walsh, of Ann Arbor, Mich., wiped tears from his face before he entered the security line with his family to travel to Mexico on Tuesday, August 1, 2017, at the Detroit Metropolitan Airport in Romulus, Mich. Lourdes Salazar Bautista (not pictured) took her children with her to Mexico as she was deported. Now, to stay with their mother, Quintana-Salazar and his older sister will be attending a school in Toluca, Mexico. (Photo by Rachel Woolf/GroundTruth)

Lourdes Salazar Bautista lifted an old photograph of her daughter to her heart and smiled. It was late at night, and she was going through keepsakes that had accumulated over the years as she raised her family in Michigan. Her children, Bryan Quintana-Salazar, 13, and Lourdes Quintana-Salazar, 15, were sitting on the back porch as they tossed documents into a glowing fire in an effort to clean out the house. Pamela Quintana-Salazar, 19, sat opposite her mother, looking at old photographs. The family was preparing for the worst, yet still hoping for the best.

Soon after, Bautista was deported. She tearfully left Ann Arbor, a place she had called home for 20 years. Now she and her two youngest children, Bryan and Lourdes, stay with her mother in Mexico. Soon they will move into an apartment in Toluca, Mexico, where Bryan and Lourdes will attend school.

“Sometimes I can’t find the adequate words to explain to my kids that there’s no reason why they have to pay for their parents, being that they are citizens and they have the right to be in [the U.S.],” Bautista said. “They want to return to their schools with the lives they had in the U.S., since it is what they know.”

More than a month after the transition to Mexico, Bautista said she experiences a lack of employment opportunity and personal safety. She is hoping to find a job to support her children. “It is very hard to return to where you left one day looking for a better life,” Bautista said.

In the past, Bautista had been granted the ability to postpone deportation to take care of her children in the United States. This agreement lasted about seven years, in exchange for her husband’s deportation. Now, she faces a 10-year ban from the U.S. Her eldest daughter, Pamela, hopes to apply for a pardon once she turns 21 on behalf of her mother, which would allow her mother to come back to the U.S. Until then, Bautista and her two youngest children are separated from Pamela, who lives in East Lansing, Michigan while attending Michigan State University.

“I will continue fighting,” Bautista said. “So that one day we can return and live the life that, being American citizens, [my children] have the right to live.”

These photos were taken on four different days leading up to Lourdes Salazar Bautista’s deportation. In the time I spent taking these photos, everyone was understandably stressed and emotional. What this family is going through is not easy. My highest priority in photographing is to be sure the family is comfortable with my presence, and that I do not add any unneeded stress. Everything happened quickly, from praying around the table one night, to a whirlwind of errands and teary goodbyes in the airport.

I will be traveling to Mexico in October to continue telling the family’s story — the transition from an unexpected deportation. Their narrative needs to be heard in today’s political climate. U.S. Immigration and Customs Enforcement have arrested more than 10,800 “non-criminals” so far in 2017, as opposed to only 4,200 in 2016. Those numbers are rising, and Bautista is more than just a number.