ON THE GROUND IN ALBUQUERQUE, NM 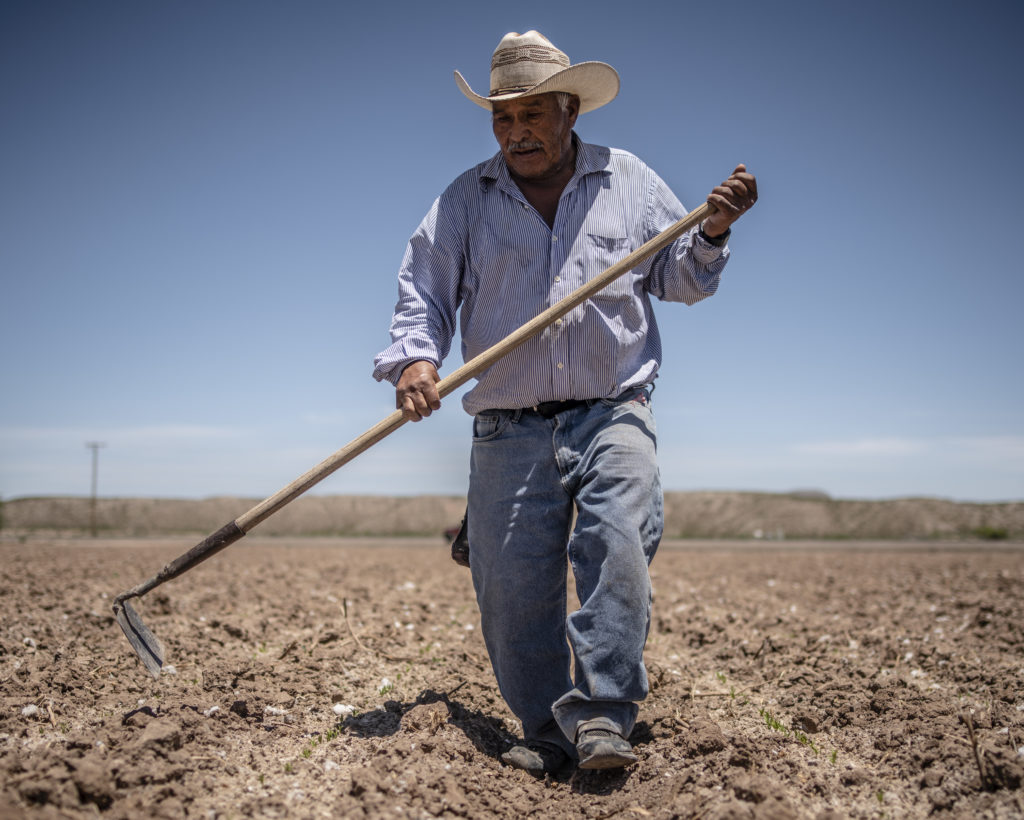 ALBUQUERQUE — On a sweltering September afternoon, farmers gathered outside their irrigation district office. Baseball caps and cowboy hats shielded them from the relentless New Mexico sun.

Their button-up shirts tucked into blue jeans, and work boots heavy on the asphalt, the men talked about their withering crops and wished for rain. The smell of roasting green chile wafted from a nearby restaurant.

Then came the inevitable news. There was not enough water to go around, and irrigation season would end a month early.

Horacio Romero and other farmers shook their heads at the announcement.

“We know the water’s tight, and they’ve done what they can,” Romero said. “But water is life. If you cut the season 30 days, 60 days shorter, it’s going to have a negative effect statewide, not just in the valley here.”

Romero and his family have grown alfalfa and sudan grass in central New Mexico for generations. Farmers like him are part of a multi-billion-dollar agriculture industry, whose fortunes are intimately tied to the Rio Grande river.

This year has pushed the river to its breaking point as New Mexico and the Southwest saw scorching temperatures. The monsoon season, which in good years soaks the region in the late summer months, was a bust this year.

Large stretches of the Rio Grande went dry as early as June. New Mexicans often argue over how best to manage the limited water supply amid increasing demand, but many farmers and water managers say it’s the worst water year in 50 years.

The word ‘drought’ is thrown around often. But the term can hardly do justice to what’s happening on the ground — record-breaking heat, dead grass and dusty fields, barely running rivers and streams, wildfires and smoky skies.

The same accusations are repeated at public meetings: farmers take too much water, cities should cut back, oil and gas operations are straining the fragile water supply.

Without a project that diverts Colorado River Basin water to the Rio Grande, most of the river would have been reduced to a trickle in early June.

By July,  federal and local officials who operate reservoirs, oversee irrigation and maintain river flows knew the Rio Grande was going to run out of water, and were left puzzling over how to keep the valley alive.

Desperate for relief, New Mexico asked Texas and Colorado for permission to use water stored under a decades-old Rio Grande river water sharing agreement. The last time the state received permission to use this water was in the 1950s.

Texas and Colorado said yes to the release, a surprising — and sobering — move among states that have fought over water for decades.

Allowing New Mexico to use the water now instead of delivering it to Texas in the fall means less water for downstream users next season.

The water helped prevent the Rio Grande from drying in Albuquerque, at least for now, said Page Pegram, the Rio Grande Basin Manager for the New Mexico Interstate Stream Commission.

The 12 billion gallons of water didn’t flood the banks of the Rio Grande. The water was routed through irrigation ditches to target river stretches that needed it most for farmers and fish.

Now that water is gone. New Mexico is left to chip away at a massive water debt to Texas, – more than 32 billion gallons, according to the Office of the State Engineer.

Climate change means New Mexico could see more frequent and more intense droughts like this year, said David Gutzler, a climate scientist and professor at the University of New Mexico.

Rising temperatures and declining snowpack levels across the West make for increasingly unpredictable and unreliable water each year in the Rio Grande river.

“It used to be the case that we could just observe snowpack in the high country, and you could make a really highly skillful prediction of streamflow that would come out during runoff season,” Gutzler said. “Water managers would have a really fine idea of what they had to work with early in the year before the runoff happened.”

This past winter, snowpack levels were about average, according to the U.S. Natural Resources Conservation Service. But in March, temperatures warmed up and it stopped snowing.

The air was so dry that some snow went directly to vapor and never melted off, meaning the water never showed up in streams or rivers.

As more precipitation falls as rain instead of snow, water managers will have to adapt their predictions and how they account for the water needed by farmers and fish.

Gutzler said he’s unsure if the rules used in the West for allocating water will last for another generation.

“Those rules are already being stretched, and we’re already starting to see some conflict,” he said. “We have to think about how to take rules and regulations and laws that were developed when there were many fewer people and a different climate, and adapt those to the hydrologic reality in the 21st century.”

Farmers often lament that there was enough water for everyone 30 years ago.

But the reality is that New Mexico faces a challenge of a less reliable river system.

The U.S. Bureau of Reclamation and local water entities are conducting a study to predict future water supply and demand for the Rio Grande Basin — data that could inform when irrigation season should start and where farmers should cut back on water use.

One developing technology would use NASA and Google satellite data to help farmers determine how much water evaporates from their crops and soil and how much water they can save by updating irrigation systems or planting different crops.

Irrigation districts along the Rio Grande pay some farmers to not irrigate their crops when water is scarce.

Cities like Albuquerque are better equipped to cope in dry years. The city once pumped so much groundwater that aquifer levels were dropping each year.

Now the city balances use of river water and water from the aquifer, which has risen steadily in the last 10 years.

Albuquerque is the only major entity with water to give this year.

In September, the city leased the “last block of water” in the Rio Grande system to the U.S. Bureau of Reclamation, the state of New Mexico and the local irrigation district to boost river flows for the endangered Rio Grande silvery minnow.

Albuquerque made the decision this summer to temporarily stop pumping the Rio Grande and instead switched to a saved-up supply of groundwater.

Katherine Yuhas, the city’s water resources division manager, said the strategy is key in a long-term plan for future water supply and demand.

“The fact that we need to use some of that ‘savings account’ this year is OK, because we got ready for this,” Yuhas said. “The Rio Grande is a very managed river at this point. This is what water management looks like, all of us working together to make these choices.”

Theresa Davis covers water for the Albuquerque Journal. This dispatch is part of a series called “On the Ground” with Report for America, an initiative of The GroundTruth Project. Follow her on Twitter: @theresa__davis.