ON THE GROUND IN SANDY HOOK, KY 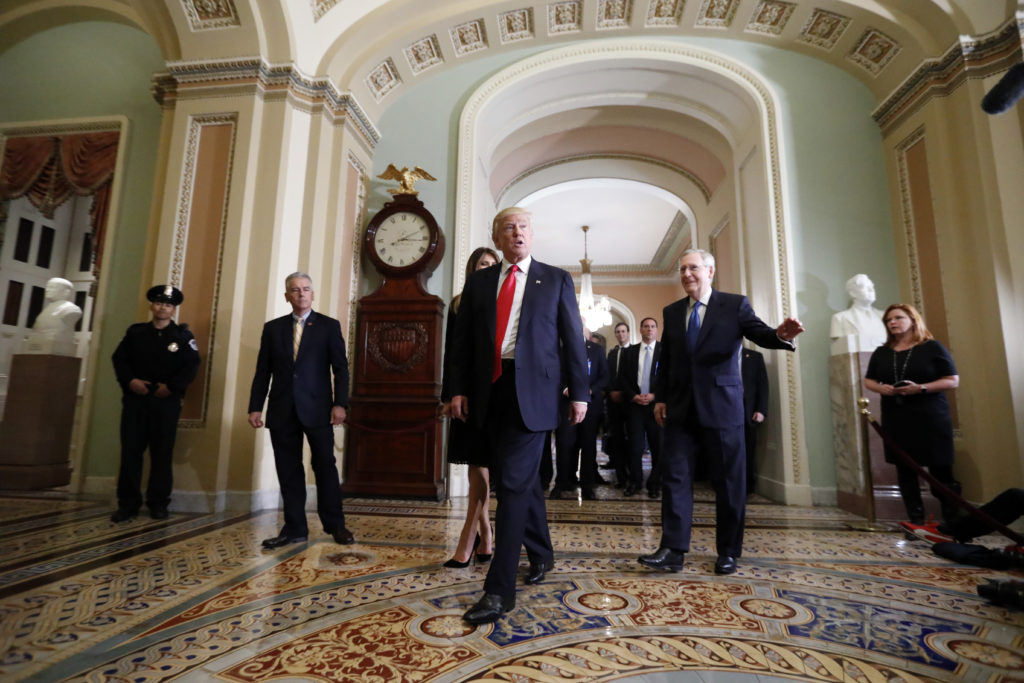 President Trump and Senate Majority Leader Mitch McConnell, of Kentucky, as they depart after a meeting on Capitol Hill. (Photo by AP/Alex Brandon)

And he won it big, trouncing Democrat Hillary Clinton by 44 percentage points. It was the largest shift from Democrat to Republican of any U.S. county President Barack Obama had won twice. Last Tuesday, Trump did even better, defeating Joe Biden and running mate Kamala Harris by a staggering 51 points.

Trump’s victory here may go unnoticed in a deep red state like Kentucky, where the 45th president crushed Biden by nearly 26 points. But interviews with residents of this rural, overwhelmingly white county highlight Trump’s enduring appeal to longtime Democrats who say they voted to repudiate parts of modern life they detest: the secularism they view as a threat to conservative Christianity, the macroeconomic forces that have hollowed out their towns, and the Democratic Party they feel has all but forgotten them.

The county’s Democratic tradition began before the Civil War and blossomed during the golden age of labor unions, in the early twentieth century. When an Elliott County resident registered to vote, the registrar wouldn’t even ask which party — everyone was assumed to be a Democrat. At the time, the Republicans and Democrats were less ideologically homogeneous. New England was home to liberal Republicans, and the South boasted scores of conservative Democrats. In the “Solid South,” Democrats maintained virtual one-party rule predicated on disenfranchisement of Black voters and opposition to racial integration.

Local Democrats realize they’re more and more like Republicans. They remain registered Democrats out of tradition — a sort of civic inertia that’s more practical than ideological.

Residents of Elliott County — population 7,508 — are concerned with local problems: poverty, opioid abuse, and economic development in a region that’s been battered by the fall of the coal industry.

“Kentucky is in the Bible Belt of America,” says Reggie Dickerson, 55, a retired pipefitter and lifelong Elliott County resident. “It’s not the finger or toe of the Bible Belt. It’s the heart of it.”

On Election Day, as a line of voters snaked outside the county courthouse, Dickerson explained that he was raised a Democrat, like just about everyone he knows.

Recently, though, he’s gotten involved in Republican politics because he thinks Democrats have abandoned the little guy. Dickerson blames President Barack Obama for the decimation of the coal industry and for abandoning Christian constituencies. He says the nail in the coffin was the Democratic Party’s embrace of same-sex marriage. The nation’s highest court struck down all state bans of same-sex marriage in 2015.

In a place where church affiliation is more important than political tribe, residents say their faith compels them to support Trump. They admit Trump isn’t a model Christian — but they back him anyway, because they figure he’s better than the alternative.

“I’m not saying he’s a godly man, but he’s more for godly things in my opinion,” says Michael Cassell, a 28-year-old from Elliott County who voted for Trump in 2016 and 2020 after voting for Obama in 2012. Cassell, who is gay and recently moved back to Kentucky from New York, thinks Christians are under siege in America, and he sees in Trump a protector of his faith community.

So does Alana Lewis. She’s 15 years old — too young to vote. But she waited over an hour in line with her cousin who’s voting at the county courthouse in Sandy Hook.

Lewis says all of her friends support Trump, and she would have voted for him if she could. “Trump’s ways go more with our morals and values in life here,” Lewis said. “He’s big about religion, and bringing it back to the people. Because you can’t talk about it really anywhere and not get in trouble or offend anyone.”

Coal has long been king in eastern Kentucky. But coal production statewide has plummeted about 70% since 2008, and locals worry that environmental protections under a Democratic president would send the moribund industry to its grave.

Once the remaining coal industry jobs “get taken away,” Lewis says, “nobody around here will have a job.” Her own father works for a company in Maryland, where jobs are more bountiful and the pay is better. “So I don’t ever get to see him. A lot of families I know have to move around with their parents just to get a job.”

Trump pledged during the 2016 presidential campaign to save the coal industry, but cheaper and cleaner energy alternatives have undermined demand as fewer power plants rely on it for fuel. Coal-mining jobs have been disappearing for years, a trend accelerated by the pandemic.

Coronavirus infections are higher per capita in Elliott County than anywhere in Kentucky, thanks to a massive outbreak at a state prison. Some elderly residents living in the most remote parts of the region say their lives haven’t changed much since the pandemic broke out in March. Others downplay the severity of the virus.

Brandon White, a 22-year-old studying biomedical sciences at nearby Morehead State University, lost his job during the pandemic. “It hurt. I didn’t get unemployment, and neither did some of my friends. We were struggling to pay bills,” said White, who cast his ballot for Trump in his hometown of Sandy Hook.

White says Trump’s response to the pandemic endeared him to the president even more. Unlike other politicians who don’t fulfill their promises, Trump “actually backs up some of the words he says,” White said. That includes his willingness to criticize undocumented immigrants. “You have to take care of America first,” said White.

Kentucky was one of the first states called for Trump on Election Day. Once again, the president carried Elliott County — only the second time in 151 years that a Republican presidential candidate won the county. His margin of victory was even larger than in 2016. Voter turnout was higher, too.

Auttie Brickey, an Elliott County resident in his 80s, cruised by the voting line outside the county courthouse on Election Day so he could witness democracy in action. He looked intent but tired.

“I don’t know who’s going to win,” said Brickey, shaking his head as his old van inched forward. “This country’s in trouble no matter who wins.”

Graham Ambrose covers youth and social services for the Kentucky Center for Investigative Reporting. This d​ispatch is part of a series called “O​n the Ground​” with Report for America, an initiative of The GroundTruth Project. Email him at GAmbrose@kycir.org.