The GroundTruth Project launches fellowship on rise of populist authoritarianism 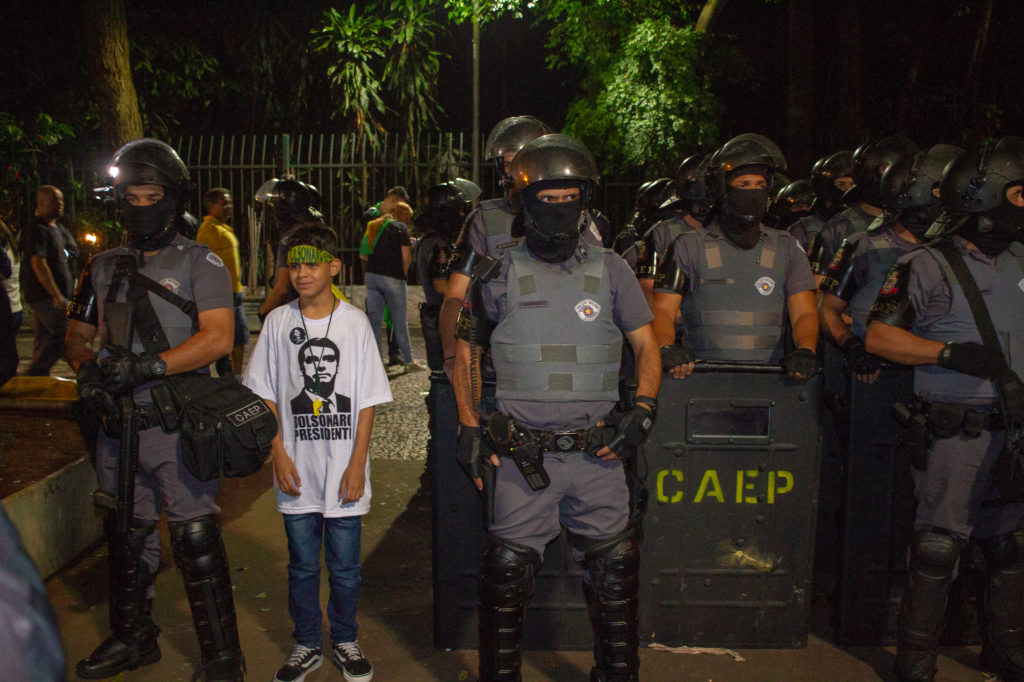 Bolsonaro supporters pose for photos with the police in São Paulo while celebrating the candidate's win in the October 28 election. The president elect has pledged to crack down on crime, ease gun ownership restrictions and change the law so that policemen are not punished for excessive use of force. (Photo by Léu Britto/DiCampana/GroundTruth)

UPDATE: We are proud to announce that  journalists Una Hajdari and Juan Arredondo will join our Democracy Undone team as fellows reporting from Poland and Colombia respectively, taking a closer look at the erosion of democracy in those societies and the people fighting to preserve their rights. Let’s meet them:

Una Hajdari is a freelance journalist focused on issues of post-conflict and post-socialist identity, and their interplay with the far-right. Her work has been published in The New York Times, The Boston Globe, The Guardian, and The New Republic, among others. She has been awarded numerous fellowships over the years, including those by the International Women’s Media Foundation, the Robert Bosch Foundation, the Berlin Journalism school and awards for investigative stories on minority and ethnic issues.

Juan Arredondo is a Colombian-American documentary photographer who has chronicled human rights and conflict stories in Colombia, Venezuela and Central America. He is a regular contributor to The New York Times, National Geographic, ESPN among others.

Since 2014, he has been reporting on the use of child soldiers by illegal armed groups in Colombia, the peace agreement between the Colombian Government and FARC and most recently the demobilization and reintegration of formers fighters into the Colombian society, for which he was awarded a World Press Photo award in 2018. He is 2019 Nieman Fellow at Harvard University.

According to the latest annual Freedom in the World report by the NGO Freedom House, global freedom has declined for the last 13 years, in what they call a “democratic recession.” “Of the 41 countries that were consistently ranked Free from 1985 to 2005, 22 have registered net score declines in the last five years,” says the report, with the trend now reaching traditional, established, democracies.

“The rise of populist authoritarianism is perhaps the greatest threat we face as a world right now. It is eroding democratic institutions in so many corners of the world and here in the United States. We ignore this threat at our own peril,” said Max Boot, an American conservative who has been among the vanguard of those sounding the alarm on this issue.

As Kurlantzick writes, autocratic populists “win democratic elections and then undermine democratic institutions and norms without becoming outright dictators.” These efforts take different forms, including harassment or imprisonment of civil society leaders, attacks against the press, restrictions on civil liberties, erosion of democratic norms as well as tacit and sometimes overt condoning of violence and hate crimes. All are fueled by nationalist and xenophobic rhetoric distributed on social media platforms.

At the same time, some scholars and policymakers are taking a careful look at how the current global economic order is pushing societies toward populism and a new generation of human rights advocates are stepping up to try to turn the tide.

We are looking for talented, emerging journalists from around the world to be part of this project, and we invite applications from any medium. But please note this special coverage will be the basis for the 2019 season of the GroundTruth Podcast, so all candidates (even those for whom audio is not their primary medium) should include clear and detailed ideas for how they will convey the reporting using evocative and compelling audio. Past podcasting experience is not required. If you have never worked in audio, we will have producers and editors who will help you execute in the field.

With new support from the MacArthur Foundation and the Henry Luce Foundation, in close collaboration with major publishing outlets, GroundTruth will be able to offer $10,000 to each fellow to cover a project budget for travel/lodging expenses, risk assessment, insurance and training as well as compensation for stories and podcast episodes produced.

Questions can be directed to GroundTruth executive editor Kevin Grant at kgrant@thegroundtruthproject.org

ABOUT THE GROUNDTRUTH PODCAST

Since launching September 11, 2015, the GroundTruth Podcast has delivered 5 seasons of award-winning stories by reporters on the ground, all across the map. With international coverage spanning everything from the war in Afghanistan, to climate change’s impact on human trafficking, infectious diseases in the Caribbean, and Syrians seeking asylum in Germany. The podcast has also covered domestic issues, like the opioid crisis and a divided America, and devoted an entire season to the emerging musical traditions of second-generation Americans.