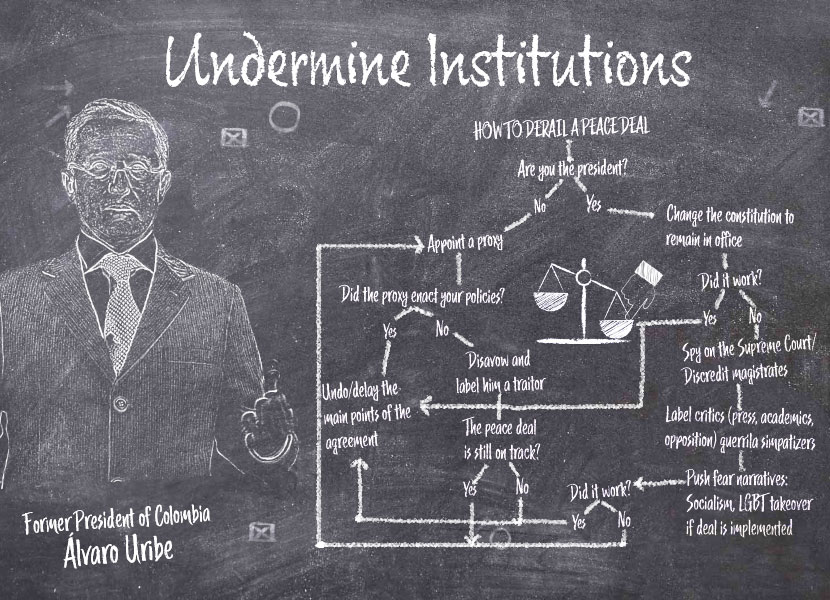 Editor’s note: This dispatch, published jointly with The Atlantic Magazine, explores another aspect of “Undermine Institutions” a tactic from The Authoritarian’s Playbook.

As a photojournalist, Arredondo has documented the hopes of the peace process between Colombia’s government and the FARC rebels – and the repercussions of its set backs. We’ve included his photography from his time as a freelancer up to being a GroundTruth reporting fellow, offering a glimpse at the on-the-ground impact of the peace process from 2015 to present.

EL CARMEN DE BOLÍVAR, Colombia—The sun hadn’t yet risen when Yirley Velasco heard her daughter scream. The girl had woken to use the restroom, but a noise at the entrance to the family’s one-storey home pulled her instead to the front door. Wedged underneath it was a white envelope tied with a black ribbon.

The implication of the delivery was clear: such packages typically signify a death in the community in Colombia. Inside the envelope were a recent photograph of Velasco walking along a street in her village and a letter addressed to her. “You seem not to understand that we don’t want you here,” it read. “We are going to kill you.” A couple of weeks later, in July, she moved with her two children, to El Carmen de Bolívar, a short distance away.

Colombia’s 2016 peace deal was a remarkable achievement. For decades the country’s most powerful rebel group, the FARC, had carried out a bloody war, and successive governments here largely responded with heavy-handed military tactics. The FARC, ostensibly a revolutionary paramilitary group, resorted more and more to extortion, kidnapping, and drug trafficking to finance its insurgency until finally, backed into a military corner, it relented. In November 2016, it signed a peace accord with the government of then-President Juan Manuel Santos and surrendered its weapons to United Nations inspectors. The country’s homicide rate soon fell to its lowest in 40 years. The oldest guerilla army in the Western Hemisphere had joined the political process. Santos was awarded a Nobel Peace Prize, and almost overnight, a conflict that had cost more than 200,000 lives and displaced more than 7 million people ended.

Three years on, however, that peace process is faltering. Criminal gangs and drug traffickers have reemerged, fighting to control Colombia’s lucrative illegal-narcotics and mining industries, and targeting union organizers, indigenous leaders, environmentalists, and community activists—like Velasco—for speaking up and opposing their presence. According to Colombia’s Institute of Studies for Peace and Development, more than 700 community leaders were killed from the beginning of 2016 to June of this year. Most of those murders took place in regions that the FARC had controlled but abandoned when it disarmed.

“We do the work that the state fails to,” Velasco told me, referring to activists and community organizers such as herself. “We are putting ourselves at risk when we demand our rights … If we stay silent, this country will get worse.”

The return to violence has been blamed on several factors, but chief among them is a lack of political support for the peace process. Critics of President Iván Duque charge that, through sins of omission and commission, he has undermined the deal’s prospects for success, and failed to do enough to protect those speaking out.

Duque’s right-wing Democratic Center party was a vociferous opponent of the peace deal, and Duque became president in 2018 having campaigned to modify (though not abrogate) the accord. More than a year into his term, less than a quarter of the agreement’s nearly 600 provisions have been fully implemented, according to an analysis by Notre Dame University’s Kroc Institute for International Peace Studies. While the study did find that the government has made “steady progress,” it also pointed out that the rate of implementation by the Duque administration “has slowed in some areas.”

Take, for example, efforts toward truth and national reconciliation, a central pillar of the peace deal. A special tribunal was created to investigate war crimes and hear accounts of abuse, and nearly 13,000 former FARC rebels and 2,000 members of the Colombian armed forces pledged to speak honestly to help the tribunal chart what had happened during the country’s decades of violence. Duque has decried this system as too lenient toward FARC commanders accused of atrocities, calling for the group to compensate its victims and for the terms of extradition to be expanded. Most notably, he has objected to the effective immunity granted to those who submit to the tribunal. (A panel of Colombian judges ruled in May that the peace deal must proceed under the negotiated terms, and then in July the UN Security Council called on Duque’s government to support the law enshrining the tribunal, to prevent further challenges to its legitimacy.)

The president’s supporters argue that, given the scale of the task and the level of damage that some areas suffered during the conflict, accomplishing even basic development promises tied to the peace deal, such as improving electricity and water provision, will take upwards of a decade, to say nothing of tackling more complex questions of justice. “Sometimes we have a hard time conveying this to the international community, but we are talking about reaching 6 million people scattered across the country that never had these services in the past 200 years,” Emilio Archila, an adviser to Duque, told me.

Colombians, however, are unconvinced. According to a recent Gallup poll, 57 percent believe this administration will not fulfill its commitments to the peace process. “We see a lack of commitment from the government to transform territories once controlled by the FARC,” Juanita Goebertus, a congresswoman for the Green Alliance party, said. “Those areas are now becoming very unstable.”

With that instability has come a rise in violence. In August, Iván Márquez, once a senior FARC commander who represented the group during peace negotiations, resurfaced after having given up his Senate seat and gone into hiding. In a recorded statement, Marquez said he and a group of dissidents were taking up arms again; dressed in fatigues, he blamed his decision on the current government’s failure to keep promises in the peace deal. According to Pares, a Colombian think tank focused on peace and reconciliation, about 1,800 former guerrilla fighters have returned to violence. In response to the heightened threat, Colombia’s armed forces have themselves apparently seen violence as a solution: The New York Times reported in May that the country’s army chief had ordered soldiers to double the number of criminals killed, captured, or forced to surrender. The directive has raised fears that the country will revert to the era of “false positives,” when members of Colombia’s armed forces killed unarmed civilians and dressed their corpses in militants’ fatigues to meet kill quotas.

Outrage over a botched bombing raid this year targeting dissident FARC members that left at least 10 minors dead—as well as the mounting numbers of social leaders killed—has prompted a wave of protests. Though the violence was the trigger for the rallies, demonstrators also demanded changes to the minimum wage and pensions, as well as tax reforms. After five days of protests, Duque called for a national dialogue. “I want us to have a broad, inclusive, and deliberate national conversation with the social sector, and unite Colombia,” he said in a televised address.

With his approval ratings at just 26 percent, though, many are skeptical that he is genuine, and his critics argue that talks will not be enough. “The dialogue has to … humbly recognize mistakes, make changes, and make concessions,” Claudia López, the mayor of Bogotá, told me. “Otherwise it will not be a dialogue that leads to anything concrete, only to more frustration.” Humberto de la Calle, the Colombian government’s chief negotiator during the peace talks, concurred. “There needs to be clear action from this government,” he told me, both to better protect activists and “go after the criminal structures behind the killings.”

In Velasco’s case, she and the authorities know who put the death threat under her door: the letter was signed by the United Self-Defense Forces of Colombia, a right-wing paramilitary group (known by its Spanish acronym AUC) which fought the FARC and is now largely made up of drug traffickers and other criminal elements. The AUC is notorious in Montes de María, a mountainous region in northern Colombia known for its blue skies and cool mountain air: The group’s fighters murdered 66 people in El Salado, Velasco’s hometown, in a five-day killing spree in February 2000, slaughtering them on a soccer field flanked by a church and a library.

When I spoke with Velasco recently, she mused about a better future for her women’s group and even dared to venture that she may one day get a degree in social work. Yet the reality of the moment was sobering: she had to wear a bulletproof vest to our meeting, as she always does when she goes out in public; the people who threatened her have not been captured or charged.

“A man once told me that to be a leader in this country,” Velasco told me, “one needs to carry a coffin at all times.”

A version of this story appeared as “The Slow Death of Colombia’s Peace Movement” on The Atlantic on Dec. 30, 2019