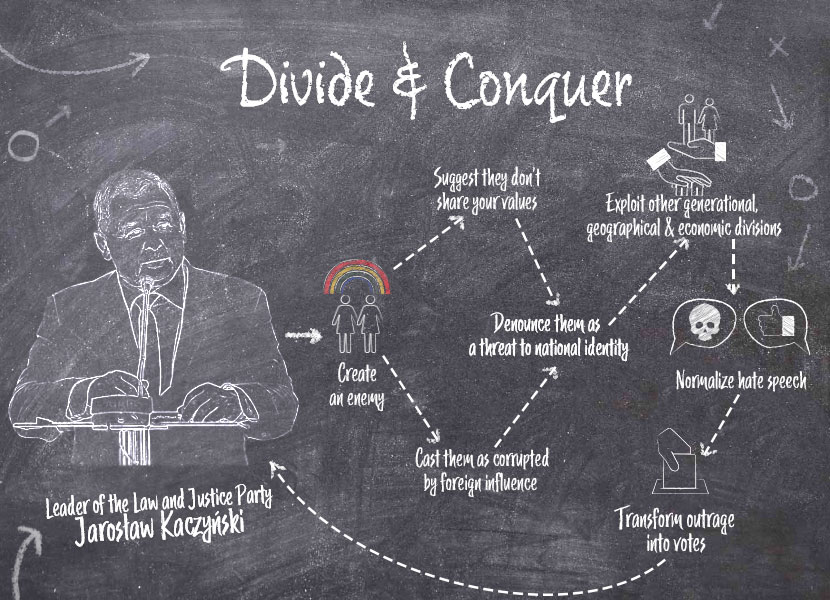 Editor’s note: This dispatch, published jointly with The Atlantic Magazine, explores another aspect of “Divide and Conquer” a tactic from The Authoritarian’s Playbook.

WARSAW—For the European demagogue, victimhood and strength go hand in hand. In the agitators’ worldview, a host of powerful forces—domestic and foreign—are targeting their people, their nation, and their values; and only a single leader, or party, has a chance of holding off these threats.

Take Europe’s diversity as an example. To the liberal democrat, the continent’s greatest strength is that it is home to an array of cultures, each with its own history and language, packed tightly next to one another. For European populists, however, diversity is a handy propaganda tool: Any person or group standing in the way of their power is labeled a threat, either because they belong to a minority—and are thus defined as not representing the country—or, if they belong to a majority, because they have been coerced into their beliefs by an outsider wishing to see the country fail.

This exercise in cognitive dissonance is usually taken a step further when the ruling party deploys such rhetoric—those in power try to rally citizens against their critics by aligning themselves with the people. An attack on the party, therefore, be it by international press or locals trying to sound the alarm, is really an attack on the country. Only the party is genuinely acting in the national interest. It is, in this way, both the victim and the defender.

Nowhere is this more prevalent than in Poland. Throughout its history, the country has endured a great deal: pulled apart by its neighbors, occupied, and attacked over and over again. The population has an understandable feeling of historical injustice. Poland’s ruling party, Law and Justice, has capitalized on this feeling, equating issues of policy to questions of identity. Poland, in the party’s telling, remains constantly under attack—from the European Union, from its stronger neighbor Germany, from domestic minorities, refugees, and even the billionaire financier George Soros. Thus votes on bills are not simply a legislative matter, they are a matter of Poland’s very survival.

The latest scapegoat: sexual minorities. For months Law and Justice, known here by its Polish acronym PiS, told voters that stances supportive of the LGBTQ community were “imported ideas” anathema to Polish values. After winning elections in October, they want to ban sex education for minors entirely.

“According to their rhetoric, progressive Western social values are not part of our identity,” Adam Leszczyński, a sociology professor at SWPS University in Warsaw, told me. “Poles are a Catholic, God-loving, heterosexual people who should only have traditional marriages, they say. Our enemies and their way of life aim to destroy our identity and destroy these traditions.”

The effort to bar sex education offers insights into this contrast between victimhood and strength. In February, Warsaw city authorities—led by the centrist Civic Platform party that is PiS’s main national opposition—passed a charter that included optional sex-ed classes and counselors for all of the capital’s schools, to support teenagers struggling with their sexual and gender identities.

The reaction among conservatives was fierce. PiS and the Catholic Church criticized the charter, and took dual tacks in opposing it. The two institutions together espouse a Catholic-nationalist view of Poland in which gay rights—along with feminism, abortion, and euthanasia—are moral threats to the Polish family and, by extension, Poland itself. PiS focused on a specific part of the charter regarding adherence to World Health Organization guidelines on teaching children about sexuality. Included in those guidelines is advice urging parents not to be shocked when their children start discovering and exploring their body before the age of 4. PiS claimed that liberals in Poland were promoting the sexualization of kids. Several local governments declared their jurisdictions “LGBT-free zones,” while a pro-government weekly, Gazeta Polska, began distributing “LGBT-free zone” stickers, featuring a rainbow flag overlaid with an X. (A Polish court later barred it from doing so.) Though these zones are largely unenforceable, they nevertheless send a strong message of intolerance to their residents. Religious leaders, too, pushed back against the charter: Most notably, the Archbishop of Krakow, Marek Jędraszewski, has called it an “LGBT ideology,” or “rainbow plague,” which represents “a threat to freedom” in Poland. To be gay is “a radical rejection of God,” he told his diocese in September. Warsaw has since February sought to implement the charter, though only a few schools have instituted the program so far, city officials told me.

The ruling party’s message—of the victimhood of Poland, and of itself as the strong defender that can rectify all ills—is hard to avoid if you live in the country. First, a senior party figure will imply it while discussing an issue at a rally or a press conference, then government-allied broadcasters will feature the remarks, followed by pro-PiS newspapers and social media. (I tried repeatedly to speak to several PiS officials, but none agreed to an on-the-record interview.)

To be clear, Poland is not a uniformly conservative or intolerant place, unlivable for minority groups or LGBTQ individuals. Its capital in particular is diverse and vibrant, with a booming arts-and-culture scene. While the public presence of the gay community cannot match that of other European cities such as Berlin or Amsterdam, Warsaw has made significant progress since 2005 when Lech Kaczyński, then the capital’s mayor and the twin brother of PiS’s current leader, banned a pride parade from taking place. “In the big cities, I don’t think it’s a problem to be an openly gay person,” Marek Szolc, a 27-year-old city councillor who was part of the group that drafted the Warsaw charter, told me. “People are generally very open about it, and we have many allies. But it turns out that in many regions of Poland you can mobilize voters by making them fear the equality of gay people.”

Whereas the Warsaw charter attempts to promote tolerance through the educational system, others have sought to change Poland’s laws and attitudes toward sexual minorities in court. Jakub Urbanik and his Spanish partner had decided to wed in Spain in 2014, and EU rules require that anyone getting married within the bloc present documents proving their unmarried status, to prevent bigamy. This is typically a straightforward process, but when Urbanik tried to obtain the documents in Poland, which does not allow same-sex marriage, he was rejected. The application form to receive them requires the name of the prospective spouse and, Urbanik told me, the official behind the counter, recognizing that his partner is male, denied his request. A law professor at the University of Warsaw, Urbanik appealed the decision to Polish courts, arguing that his eligibility to marry should be determined by the country where he would be doing so—Spain, which allows same-sex marriage. Urbanik and his partner also argued that EU rules ensured the right of anyone to marry, and that Polish officials were infringing upon those rights. The pair exhausted all their legal options in Poland when a court in Warsaw ruled against them on appeal. They are now hoping for the case to be taken on by the European Court of Human Rights. He insists the effort was not futile. “I wanted to test the system,” he told me. “I have a duty not only to teach law, but to test it as well.”

What is it about these ideas and values regarding the treatment of the LGBTQ community that PiS sees as being threatening to Poland?
For one, the party has, since its creation as a merger of nationalist movements after Poland’s transition from Communism, voiced a commitment to tackling internal enemies. Upon its founding in 2001, PiS claimed to be an alternative to what it describes as a pact of elites ruling Poland—cosmopolitan urban dwellers, the children of card-carrying Communists, big-business owners, and the liberal media—who, the party charged, had benefited from unfair advantages.

Critics of PiS say that it has used a victimhood narrative to distract from the dismantling of liberal-democratic institutions here: Under the party’s watch, judicial independence has been eroded, with PiS attempting to force out a huge number of judges by arbitrarily changing the retirement age and passing a law that allows for Polish judges to be investigated and punished for their rulings. The European Commission, the EU’s executive arm, this year referred Warsaw to the bloc’s highest court over the new law. This criticism from the EU, however, counterintuitively helps PiS’s argument domestically. The EU, in the party’s view, hates Poland, so anything the EU wants Poland to do cannot be good for the country. (This is certainly not a universally held view here—thousands took to the streets this month against a PiS proposal that would allow judges to be fired if they criticized the way the ruling party was handling the judiciary, chanting “Free the Courts and carrying EU flags!”)

“Poland is a peaceful country that has seen significant economic success in the past three decades, yet still the narrative of a nation under threat permeates and is able to spark fear in people,” Leszczynski, the sociology professor, told me. “They claim that Poland is being pressured to accept liberal values: Either we win this battle today, or we are doomed forever.”

A version of this story appeared as “The Demagogue’s Cocktail of Victimhood and Strength”on The Atlantic on Dec. 31, 2019