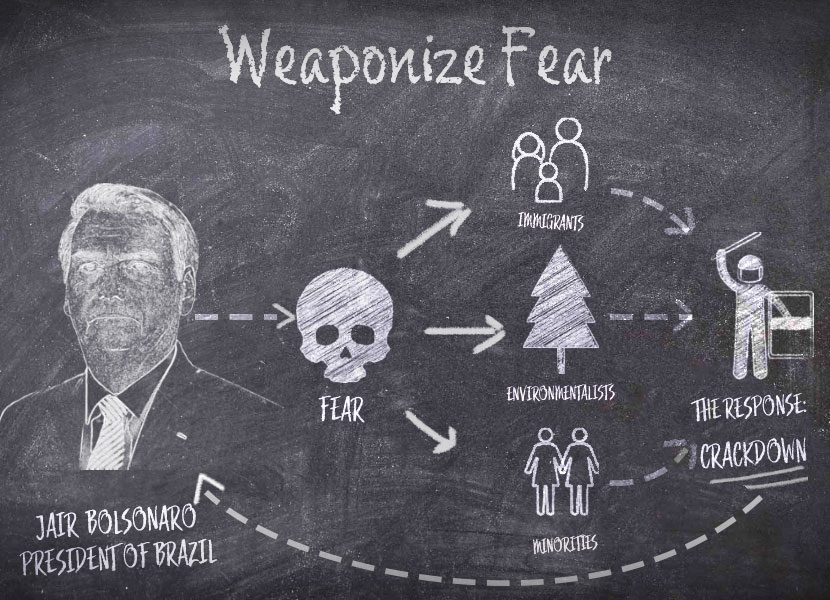 Editor’s note: This dispatch, published jointly with The Atlantic Magazine, explores another aspect of “Weaponizing Fear,” a tactic from  The Authoritarian’s Playbook.

PETERSBURG, Virginia — Talking with Olavo de Carvalho can be an exercise in self-restraint. As I walked into his house for an interview recently, he was sitting behind his desk, his gray hair neatly combed back. More than 100 smoking pipes were lined up on a rack, and thousands of books were stacked on the shelves of his home office alongside at least 20 rifles. He greeted me with a deep frown and wide eyes before pointing at a printout of a recent article I had written and bellowing, “What the fuck is that?”

So began our second meeting. 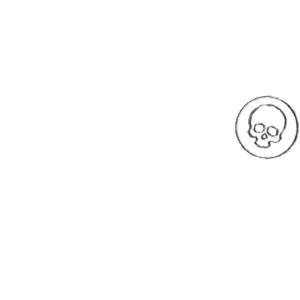 Sitting across from him, I saw that he had already set up his computer to film our exchange, his laptop camera framing my face. (He records all his interviews with reporters, whom he calls “enemies of the people,” often releasing them on YouTube. These are then spread by his followers, with titles such as “Olavo humiliates journalist.”) His wife, daughter, and a handful of other relatives and friends sat on a couch behind me, eating Burger King and smoking cigarettes, like an audience waiting for a show.

I had been trying for months to get back in touch with him, and just two hours earlier, he had agreed to meet. He had read my story about him and wanted a chance to respond. Before long, he was extending his right arm and pointing his index finger at my face. “You’re very malicious, naughty, a liar—you are defaming me!” he shouted.

“You’re a slut,” he went on, wagging his finger. “You come to my house with this cynical smile … You’re worth nothing, woman!”

His language could be disregarded if they were random attacks, if he were an eccentric from the political hinterland. But Olavo de Carvalho is something else: Known simply as “Olavo” across his native Brazil, the former astrologist, former communist, and former journalist has become the most virulent voice against the left in Brazil. His commentary immediately reverberates across the country, propagated by his more than 1 million followers on YouTube and Facebook. Worshipped by the right and ridiculed as an extremist by the left, Olavo and his beliefs are discussed almost daily in Brazil, everywhere from threads on Twitter to long magazine articles.

He is powerful for another reason. The 72-year-old is the architect of Brazilian President Jair Bolsonaro’s far-right vision. A self-educated philosopher who never completed high school, Olavo has formed a new generation of conservative leaders in Brazil through an online philosophy course he has taught for 10 years. He estimates that about 5,000 students are currently enrolled in his program, and 20,000 people have watched his classes, including members of Bolsonaro’s cabinet.

Now, from his ranch-style home in this rural county south of Richmond, he’s at the center of an anti-intellectual ideology shaping the policies of a nation of more than 200 million people, providing inspiration for one of the world’s most extreme leaders and, in so doing, turning fringe beliefs into government action.

It would be easy to liken him to another, better-known, right-wing ideologue who offered guidance to a surprising presidential winner. Yet Olavo bristles at the comparisons to Steve Bannon, or at least he used to. When I first met Olavo, a year ago, Bolsonaro had been elected but not inaugurated, and Olavo had not yet met Bannon in person. He told me at the time that he didn’t take Bannon seriously. Much has changed since then. Two weeks after Bolsonaro’s inauguration in January, Bannon met with Olavo at his Petersburg home, and a couple of months later, Olavo was the guest of honor at an event hosted by Bannon at the Trump Hotel in Washington, where the former White House chief strategist introduced him to a select group of about 100 conservative guests. “Olavo is one of the great conservative intellectuals in the world,” Bannon has said.

The day after Bannon feted Olavo, it was Bolsonaro’s turn. During a visit to Washington—the Brazilian leader’s first international trip as a head of state—Bolsonaro hosted a formal dinner at the residence of the Brazilian ambassador. Olavo sat on Bolsonaro’s right, Bannon on his left. Bolsonaro said in a speech that he had long dreamed of setting “Brazil free from the nefarious leftist ideology.” Then he looked at Olavo and said, “The revolution we are living, we owe in large part to him.”

It was not the first time that Bolsonaro had publicly honored Olavo. In his first speech to the nation after his election, the former army captain placed four books on his desk: the Bible, Brazil’s constitution, Winston Churchill’s Memoirs of the Second World War, and a book by Olavo—The Minimum You Need to Know to Not Be an Idiot. “What I want most is to follow God’s teachings alongside the Brazilian constitution,” he said. “I also want to be inspired by great leaders, giving good advice.”

Bolsonaro met Olavo in person only after his election victory, but their relationship started almost a decade ago, when Olavo’s online accounts came to the attention of Bolsonaro’s children, who are themselves politicians. In 2012, the Brazilian leader’s eldest son, Flavio, who was a representative in Rio de Janeiro’s state assembly, traveled to Olavo’s house in Virginia to award him the Tiradentes medal, the legislature’s highest distinction. Five years later, another son, Eduardo, a national legislative representative, broadcast a video from Olavo’s house wearing a T-shirt that read olavo tem razão (“Olavo is right”). Protestors chanted that same slogan in street demonstrations against the federal government before Bolsonaro’s election, decrying the corruption scandals that helped propel him to power.

These days, when Olavo speaks, Bolsonaro listens. The president took Olavo’s recommendation in appointing as foreign minister a conservative Christian who has called climate change a “Marxist conspiracy.” Those running Bolsonaro’s “hate cabinet,” charged with maintaining a tone of anger on social media and in his public appearances, appear to have taken inspiration from Olavo. A former student in his online philosophy course is now Brazil’s minister of education and has set about converting its teachings into government policy: To combat “cultural Marxism,” the government has slashed operational funding for federal universities—considered centers of leftist indoctrination—by 30 percent.

Olavo’s stated hatred of communism, however, perhaps most strongly informs Bolsonaro’s policies within Brazil. It forms the core of both men’s beliefs, providing a rationale for “law and order” policies in which the president has facilitated civilian access to guns and encouraged a police crackdown in the favelas; offering a critique against “leftists” who argue human rights are being trampled; and allowing for a defence of Brazil’s military dictatorship, interpreted in Olavo’s worldview as a “revolution” that saved the country from communism in the 1960s. In his 27 years as a congressman, Bolsonaro frequently spoke out in favor of the dictatorship, saying its biggest mistake was that it stopped at torturing dissidents, rather than simply killing them.

When I quoted some of these public statements to Olavo, he dismissed them. Bolsonaro’s remarks, he said simply, were often “full of hyperbole and jokes.”

Bolsonaro and members of his cabinet are followers of Olavo’s—in August, he was awarded Brazil’s highest diplomatic distinction, for “service and merit”—yet his reach actually stretches further, thanks to his online presence.

Olavo first came to the United States in 2005, to work as a Washington correspondent for Diário do Comércio, then a financial print newspaper. He told me that although he was previously in close contact with American politicians and journalists, he soon “lost interest” because “they are a bunch of boring people.” He found his calling on the internet.

In 2009, he created his online course to tackle what he had diagnosed as the main problem facing Brazil: the “leftist dominance” of the country’s media and universities. He told me that he hoped to build a conservative political class in 30 years. In reality, it took much less time.

In his lessons, he spreads the falsehood that the Nazis were a left-wing party (rhetoric used by Bolsonaro’s supporters against their political opponents), teaches his students that disrespecting the enemy is a basic principle required to defeat the left, and often uses sexually charged language to garner attention—in our initial meeting, Olavo described Bolsonaro’s election as a “premature ejaculation.” He argues that dissidents should be intimidated and, in one video posted by a supporter on YouTube, instructs viewers on how to use personal attacks to intimidate “communists.” His followers should, he says, use “all bad words from the Portuguese language” against critics. “It’s not about destroying ideas,” Olavo continues, “but destroying the careers and the power of people. You have to be direct, and without respect—that’s very important.”

Our conversation in his home office reflected that strategy. I quoted multiple examples to him of his public support for Brazil’s dictatorship: his statements that the regime was “too soft,” that its “mildness” allowed “leftist lies” to perpetuate. He dismissed them all and instead shifted focus, saying I was ignoring people that communists “are killing every day” around the world. Then he became angry, accusing me of trying to paint the right as evil. “Don’t you have any real thoughts?” he asked me. “Do you just want to seem cute? Is your life only that?”

As our 90-minute interview came to an end, Olavo said he was barring me from publishing any of his quotes—despite the entire conversation’s having been on the record (indeed, recorded by us both)—and threatened to expose me on the internet, although he has not yet uploaded the video of our interaction to his YouTube channel.

After a brief pause, his tone suddenly turned solemn: “I wanted you to know that you disgusted my whole family.” Then it rose again as he stood up and snapped, “Get out!”

As I left his home and walked back down the narrow road surrounded by pine trees and American flags, past an old Dodge van with a rear-bumper sticker that read commie hunter, and got into my car to go home, I marveled at him—our meeting had been a masterclass in his philosophy and style: hate speech targeting the press, doubt sown about historical facts, and threats to weaponize his online following to cow his critics.

Olavo proudly told me that through his teachings he has created a “genius factory” online. “My influence on Brazil’s culture is infinitely bigger than anything the government is doing,” he said. “I am changing Brazil’s cultural history. Governments go away; the culture stays.”

A version of this story appeared as “Meet the Intellectual Founder of Brazil’s Far Right” on The Atlantic on Dec. 28, 2019