Democracy Undone: How Trump sells his war on truth 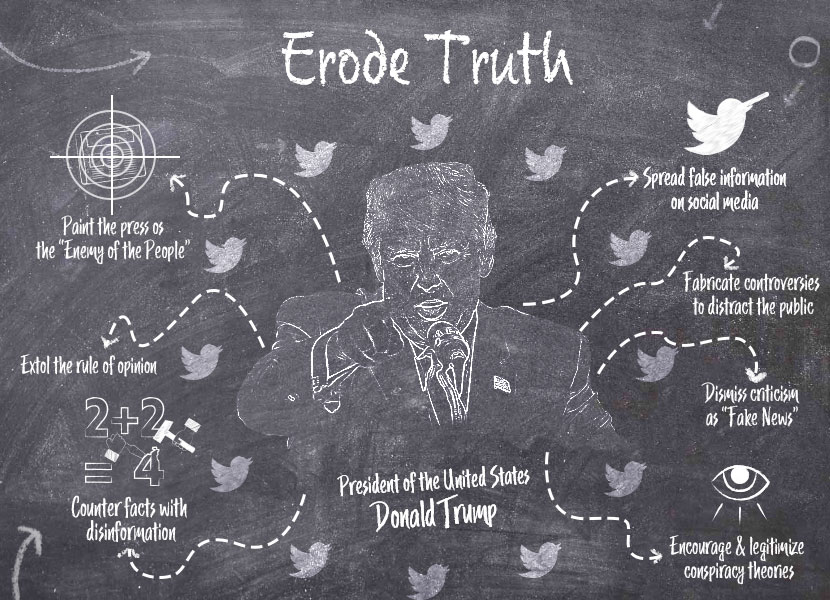 DALLAS — A sea of red flooded the streets around a downtown arena. American flags waved high among a crowd wearing red t-shirts and hats. People — young and old, men and women, families and old friends — flowed toward the big show like a surging tide.

If you didn’t know that the 45th president was in town, this easily could have been mistaken for a Texas football tailgate, but no, this was one of President Trump’s official 2020 campaign rallies all unfolding just as he found himself at the center of an official impeachment proceeding.

The line to get into the rally started the night before. And the hawkers with display tables of red MAGA hats and the full array of red swag with the Trump logo were doing brisk sales. “Zero percent liberal, 100 percent American,” “Fear not the hat,” “Are you tired of winning yet?” read Trump 2020 shirts.

Over 18,000 people snaked around the arena for blocks, a halting march into a packed stadium and perhaps an unknowing sleepwalk from Trump’s brand of populist nationalism towards what critics fear may be a creeping authoritarianism where one party takes all and where facts no longer matter.

The crowd watched from inside and outside of the arena, eyes glued to Trump, cheering, hanging on his every word — true or not. No matter how crude, seemingly unhinged, or unfactual the president was in this and so many other speeches, his fans were there to show the love, to perhaps excuse him, and to show their support for four more years.

“I don’t think anybody tells the truth all the time. You know, sometimes you gotta exaggerate things a little bit to get your way,” said a Trump supporter named Richard outside the rally.

Richard and his wife Dawn, who asked that their last name not be used, said they live in Dallas and that they’d been on line for hours. As they made their way into the rally, Richard added, “It’s true in every area of your life, if you think it’s good for your family, you’re going to push it through. That’s what you’re going to do. You’re in charge of your family. He’s in charge of this family and we elected him to do that–that’s what he’s going to do.”

According to the Washington Post, president Trump made 13,435 false or misleading claims between taking office and October 9, 2019. That is 13 lies a day. This is a very specific strategy Trump has mastered–eroding the truth. And it’s not just the discernible falsehoods, he is attacking the media, experts, and anyone who presents facts. It sometimes feels like he is attacking truth itself.

The administration has discredited the media by naming them “fake news;” flooded the news cycle with disinformation and distractions on twitter; restricted White House access for reporters he disagrees with; and created a dynamic where if the media can’t be trusted then president Trump, himself, is, by definition, the sole arbiter of truth.

Levitsky explained how the present level of political polarization and echo chambers undermine our institutions.

“The underlying processes of polarization and norm erosion continue unabated,” Levitsky said. “So it’s very, very difficult to make a Madisonian presidential system of checks and balances of divided government work in a context of extreme polarization.”

Trump is not alone in this strategy. This tactic is being used around the world in what feels like a playbook in which populist leaders who are democratically elected are pulling their countries towards authoritarian regimes. In India, Prime Minister Narendra Modi is exploiting religion to reforge the world’s largest democracy in the mold of a Hindu nationalist ideology. In Brazil, president Jair Bolsonaro uses brutal and oppressive policies to weaponize fear. And in Hungary a media consortium controlled by Prime Minister Viktor Orban’s associates and political allies controls the news, and is recasting the historical narrative of the country. The list goes on in Italy, Poland, Colombia and beyond in the Philippines and in Egypt — all places where leaders seem to be systematically undercutting the democracies that elected them.

In America, Trump’s main target is the press corps, which he has labeled “the enemy of the people.” There are few who know this line of attack better than CNN’s Chief White House Correspondent, Jim Acosta who has been the target of the president’s attacks.

“It started off as an act. He’s trolling us. He’s taunting us,” Acosta said. “But not everybody’s in on it. Not everybody is in on the joke or the act. And it’s gotten to a point where real harm could be done.”

Covering presidential politics for 15 years, Acosta was on the 2016 campaign trail with then-candidate Trump. In June, he published a new book, The Enemy of the People: A Dangerous Time to Tell the Truth in America, which focuses on the relationship between the Trump administration, the press corps and the role of truth in a democracy.

“The guardrails of democracy are banged up right now. No question about it. He’s assaulted the press. He’s assaulted our independent judicial system, and our law enforcement community, and our intelligence community, all these institutions that have kept America in pretty good stead for the last 50 years, 60 or 70 years,” Acosta said in an interview at a hotel just around the corner from the White House.

Democracies have been weakened before, but President Trump seems particularly good at exploiting this moment of division in the U.S.

“He [Trump] is selling a powerful narcotic. Hate is a narcotic, and when you use it to pit one group of Americans against another and say things like ‘the press is the enemy of the people, Maxine Waters is a low IQ person, send them back, Baltimore is a rodent-infested city.’ I mean, I could keep going on and on and on. These are the things that he says at his rallies. Obviously, folks are responding to it because it works,” Acosta said.

As Acosta knows, this kind of divisive rhetoric can lead to violence — he’s been harassed at rallies, received death threats, and even had a pipe bomb sent to his CNN office.

On a warm night in August 2017, that propensity for violence to break out was on display when self-proclaimed white nationalists Richard Spencer and Jason Kessler marched across the University of Virginia campus with tiki torches chanting, “Jews will not replace us” and “blood and soil.” Both phrases are direct translations from German expressions of Nazi ideology. A white nationalist rammed his car into a crowd of counter-protesters. Heather Heyer, who was among those protesting the white nationalists, was killed by the driver, James Alex Fields Jr., who was convicted and sentenced to life in prison on hate-crime charges.

In the days after the incident, Acosta was with president Trump at Trump Tower in New York as the president defended the protests as having “very fine people” on both sides. This false equivalence outraged many Americans, who were shocked to hear the president putting fascists and those there to protest fascism on the same level, and referring to the white nationalists as “fine people.” To many Americans, this was an insult to the United States’ fabled “melting pot.” But for those who have felt threatened by changing demographics and a changing workforce in America this was a nod to them—an acknowledgment that the president understood them and was there for them too.

“He’s a short-term political day trader. He realizes short-term political gains in doing that sort of thing.” Acosta said. “So when he, you know, shows a little leg and says that there are very fine people on both sides, I think he’s trying to say to his supporters. Listen, I know some of you maybe got a little out of hand out there. But, you know, I know what you know, some of you guys out there were just there for the monuments, and that’s OK.”

But, what is the line between not isolating a certain subset of citizens for political gain and making exceptions for extremism?

Levitsky attributes a demographic shift in the country to helping to feed Trump’s MAGA, or Make America Great Again, movement.

“All the presidents were white Protestants, almost all the governors, the Senators, the Supreme Court justices, the pillars of local communities, the CEOs, the TV broadcasters, the college professors, the faces of both parties,” he said. “Losing an electoral majority, but in particular, losing one’s dominant social status is deeply threatening, and that that’s where slogans like “Take our country back” and “Make America Great Again” come from. That’s why they have so much pull. Losing a dominant social status is a deeply threatening thing. It is perceived by many, not all, but many Republican voters as really an existential threat. This is not just losing an election. This is losing your country.”

Three years after inauguration and the Unite the Right Rally in Charlottesville, President Trump has mastered his populist rhetoric.

He has held hundreds of rallies and reached millions of people. At each one he preaches to his tribe: American’s fed up with the politics of politics, those who feel the American Dream is threatened for them, or those who imagine an easier past and want to Make America Great Again.

Each time, thousands of supporters cheer on the president as he spouts his catchy trumpisms calling Democrats nicknames like “Shifty Schiff” and “Sleepy Joe Biden.”

As he praises his own successes: “the United States right now has the hottest economy anywhere in the world.”

And even when he flat-out lies, like when he said, “Virtually every top Democrat also now supports late-term abortion, ripping babies straight from the mother’s womb, right up to the moment of birth.”

So what is the long-term cost of these falsehoods? In a world where the press is targeted by Trump, truth is increasingly in the eye of the beholder, and citizens are becoming more comfortable with a president left unchecked, where does that leave us?

In Dallas, he again whipped his supporters into a frenzy, proving that even with an impeachment investigation looming in the background, his base will always rally, because if anyone is after the president, they are after his supporters too.

Loud cheers echoed across the arena as his supporters clapped and held their signs higher in the air, letting the President know they will always believe in the vision Trump is selling. When the President finished, the sea of red swept back out into the streets of Dallas gleefully marching towards a new normal.