Deep in the heart of Texas oil country, some hope for a Trump victory like their life depends on it 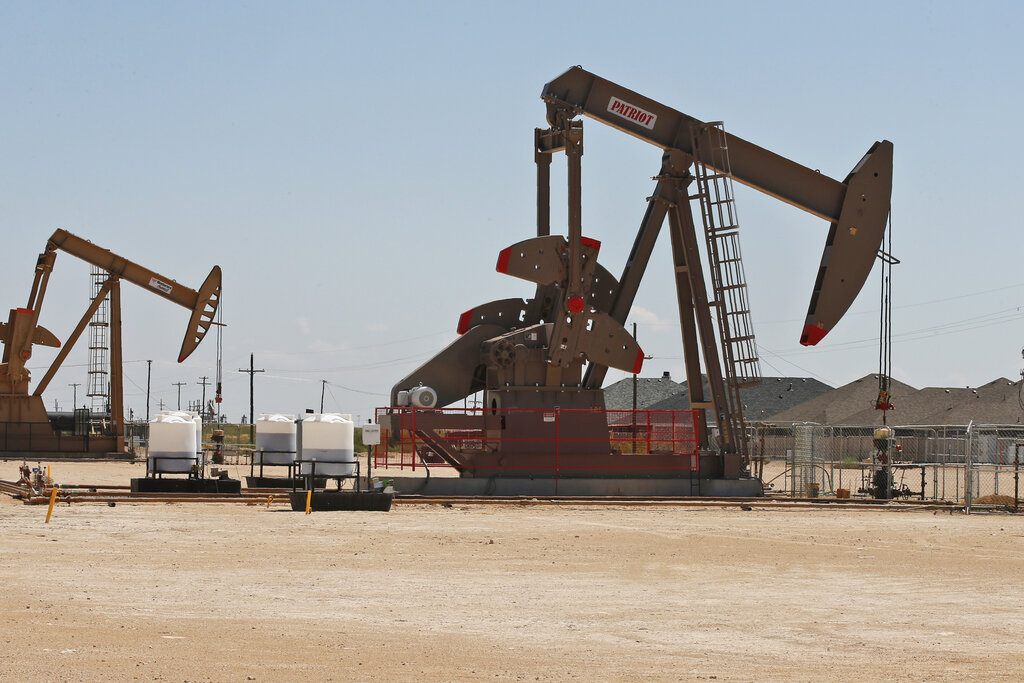 In this Monday, Sept. 2, 2019, photo, pump jacks stand next to a housing development in Odessa, Texas. Odessa, in the Permian Basin region, is known for its oil fields that cut into neighborhoods where a boom cycle has made housing expensive and scarce. (Photo by Sue Ogrocki/AP Photo)

ODESSA, Texas – In a parking lot in El Paso, just yards from the U.S.-Mexico border, dozens of cars waited in line at a drive-through coronavirus testing site. Outside the University Medical Center, nurses in scrubs rushed back and forth between makeshift tents housing COVID-19 patients.

Less than a mile away, at the El Paso Coliseum polling place, there were no lines. A few voters filtered in and out of the brick building. Like many other places around the country, most citizens here had already voted, either by mail or during early voting.

The El Pasoans who did vote on Election Day couldn’t escape the grim news of the virus rippling through the county. Cases and deaths have been surging in this Texas border town, forcing the county medical examiner to order a fourth mobile morgue as emergency rooms operated at capacity, and the top county executive ordered a shutdown of non-essential operations (voting is considered essential).

Anthony, 71, stood outside the polling place with a dark face mask stretched firmly below his glasses. He had voted early, but was waiting for his wife, who had work the day before.

“COVID is worse than the presidential candidates, than the legislators,” Anthony, who identified himself only by his first name, said in Spanish. He declined to say who he voted for, a grin evident even behind his mask. “It’s a secret.”

Many political pundits expected this year’s presidential election to be a referendum on President Donald Trump’s handling of the pandemic. Polls regularly showed it as a top issue for voters, as the virus killed more than 230,000 and is infecting close to 100,000 people every day. Still, with more than 68 million Americans voting to give Trump another four years in office, early results point to a divided, misunderstood nation.

The division was clear in the Lone Star State, where the rumors of a “blue wave” have been circulating for years, especially after El Paso native Beto O’Rourke energized the state’s Democratic base during his unsuccessful bid in 2018 to oust Republican Senator Ted Cruz.

Some Democrats held hopes that urban voters in cities like El Paso would help turn the historically Republican bastion of Texas in Biden’s favor this year. Biden won El Paso County by 34 percentage points, but the boost from it and other large cities was not enough to offset conservative votes from rural and suburban Texas, and Biden looks to have lost the state overall by six percentage points.

Trump has been a polarizing political leader unlike any modern America has seen, and that was evident in conversations with El Paso voters, the Arreola sisters – Celeste, 23, Clarissa, 21, and Emily, 19, who were unanimous in their support for former Vice President Joe Biden, but each for a different reason.

“For the people,” said Emily.

Heading east from El Paso, low-lying suburbs fade into wide, flat plains. Past the Guadalupe mountains, drilling rigs dot the flat horizon. You know you are in oil country when you smell the fumes of oil production along the highway.

This is the Permian Basin, home to the prolific West Texas oil patch and a deeply Republican region.

In the tiny oil outpost of Jal, New Mexico, just on the other side of the Texas-New Mexico border, a pick-up truck turned out onto the road, waving a flag bearing an image of President Trump’s head photoshopped onto the body of Rambo, the tough, gun-toting action movie hero. A masked gas station attendant wearing a bedazzled Trump 2020 t-shirt listened to early voting returns on her phone while checking out mostly mask-less customers.

Even more than the illness, it was the paralyzing economic effect of the pandemic that has shaken the oil patch communities.

Until March, the oil economy was gushing. The Permian Basin had become the world’s top oil producer in April 2019, and oil prices were high. But then the pandemic hit, the economy contracted and demand for the oil that feeds the nation’s economic engine plummeted. Oil production stalled.

In Odessa, the blue-collar hub of the region, pick-up trucks dotted the parking lot outside a local sports bar. Inside, patrons in mesh trucker caps kept an eye on the TVs, half tuned to Fox News’ election night coverage, half to an NBC Golf Channel documentary about Arnold Palmer. In a space between tables, a couple danced and smiled to a lilting country song.

Benito Carrasco, 51, was enjoying his first night off after eight straight days of twelve-hour graveyard shifts as a truck dispatcher in the oil fields. He hadn’t voted, but was hoping Trump would win.

“If Biden wins, I gotta find another job,” said Carrasco.

As Fox News called Florida for Trump, a man across the bar let out a whoop.

With Latinos making up 42% of the population in Ector county, where Odessa is located, some oilfield workers like Carrasco are voting with their jobs and livelihood in mind. To be sure, analysts are still learning the fault lines among Latino voters, often along gender and generational lines. But for his part, Carrasco is happy to overlook Trump’s politics or personality, if that’ll let him keep his job.

Related: The many faces of the ‘Latino vote’

“For three years, I thought Trump was the devil,” said Carrasco. That is, until Biden won the Democratic nomination and started talking about clean energy.  “Now I’m a Trump supporter.”

Carrasco’s father worked in the oil business here in the 80s, when a massive crash in oil prices devastated the region. Carrasco’s father had to find other work. Carrasco remembers his childhood with six siblings in a two bedroom house where the oven was often the go-to source of heat in winter.

Living paycheck to paycheck, Carrasco is nervous that a win for Biden — who wants to transition away from fossil fuels —  could cost him his job.

“We wanna take care of the earth, I understand,” said Carrasco. “But we’ve got people whose lives depend on this.”

Trump hauled in 73.4% of the votes in Ector County, which is reliably conservative, unlike El Paso.

Across the bar, another man stood up and started joyfully swearing. Fox News had just called Texas for Trump. A woman he was with ran and jumped into his arms.

The morning after, a slow, clean sunrise silhouetted the oil rigs. A fleet of pick-up trucks spilled out onto the highways, off for another day of work. The El Paso Department of Public Health coronavirus tracker reported 3,100 new cases, the highest single day total yet.