David and Goliath: A small town takes on Nestle 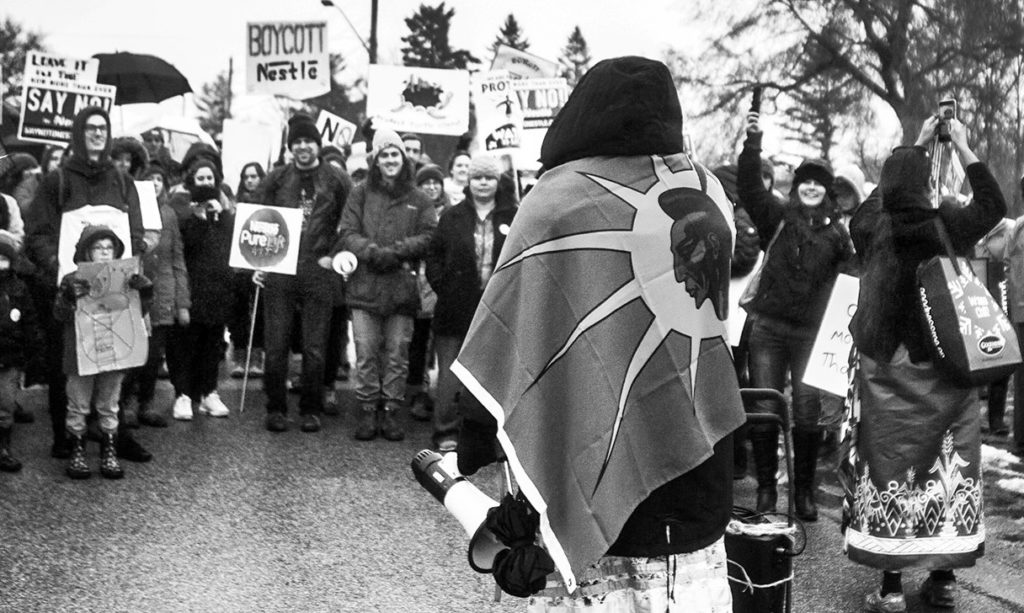 An Iroquois woman from Six Nations of the Grand River draped in the Mohawk warrior flag speaks to hundreds of protesters gathered outside of a Nestle Waters Canada plant in Puslinch. (Photo by Chris Donovan/GroundTruth)

Much of Elora, a picturesque farming community about 100 miles west of Toronto on the banks of the Grand River, is tied to water. From culture to commerce, the river is intrinsically woven into the fabric of the town.

And yet, when Donna McCaw and other community members spoke out against the purchase of the Middlebrook well, which pulls water from the Grand River watershed, by Nestle Waters Canada in 2016, they were met with disbelief from their neighbors, who were excited by the promise of new jobs in the area, a promise which, according to McCaw, was vastly overstated by Nestle.

McCaw and other members of the community began to organize through a series of public meetings, culminating in the creation of the organization Save Our Water, which has been protesting against Nestle since then. And the grassroots organizers have seen some success.

The provincial government of Ontario imposed a moratorium on water extraction at the Middlebrook well on Jan. 1, 2017 and was to be in place for two years. It has been extended three times and is now set to end on April 1, 2021.

Donna McCaw, a founding member of Save Our Water, said that the group of volunteers has received a groundswell of support from the community, but it was not easy to get the public onboard because of initial excitement over job creation, which she said was vastly overstated by Nestle.

The provincial government of Ontario imposed a moratorium on water extraction at the Middlebrook well on Jan. 1, 2017 and was to be in place for two years. It has been extended three times and is now set to end on April 1, 2021.

Despite the strides made and the change in public attitude, McCaw, who lives along the banks of the Grand River sometimes worries that her days in Elora could be numbered.

“I don’t know if I could continue to live here if Nestle were allowed to take this water,” said McCaw. “Every day I would look out at the water and it would be a reminder of the injustice in my community. I just don’t know if my heart could handle that.”

She has seen Nestle’s other forays into harvesting local water resources. The food and drink company has been extracting water in Wellington County for decades, operating two other wells and setting up their headquarters in the nearby city of Guelph. The Aberfoyle well can extract 3.6 million liters of water per day, and the well in nearby Hillsburgh can extract 1.1 million liters per day.

The Middlebrook well is proposed to pull 1.6 million additional liters of water per day, which would bring the total amount of groundwater extracted in the county for the purpose of bottling to 6.3 million liters each day.

Many residents of Wellington County worry that this level of groundwater extraction from  the area will cause long-term water shortages and destabilize the already fragile Grand River.

“Save Our Water paid to have an independent geological water study conducted to examine the state of our groundwater,” said Jan Beveridge, a founding member of the organization. “There is a pervasive myth in Canada that we have a vast abundance of water, and that was certainly the case in Wellington County when we began this fight as well. We have a lot of surface water in the Great Lakes and frozen in glaciers, and because of that, people believe that we have a lot of groundwater, but through our study we found that was not true in our region.”

Beveridge has been campaigning against water extraction in Wellington County since 2004. She said there are multiple other factors that could have a negative effect on the rejuvenation of groundwater that the public seldom often does not takes into consideration, including climate change and infrastructure development.

Beveridge said the thing that most concerns her is the age of the groundwater that Nestle is hoping to extract.

“We found that most of our groundwater is hundreds of years old, some of it up to 500 years old,” she said. “This means that it can take centuries for that groundwater to replenish after it’s been extracted. The provincial government water budgets, which examine how much water is coming in and out of our system, measures impact for only 20 years. The First Nations people whom we’ve been fighting alongside for the past few years say that we should be planning for at least seven generations into the future. The government bodies are planning for one generation. To me, that is extremely short-sighted.”

I have been interested in issues of water security for years. Growing up in Saint John, where boil-water advisories were common, it was on my radar when I picked up the camera. This led me to work in indigenous communities in Canada that lacked proper access to drinking water as well as in Flint, Michigan.

I learned about the fight between the residents of Wellington County and Nestle in the summer of 2017 when I was in Elora for a music festival. The Save Our Water organization had a significant presence at the festival and I remember seeing “Save Our Water” signs all over town.

I was inspired by the reach of this grassroots organization and decided to return to Elora to better get to know the activists involved. I returned a few times over the following three years to document the community members on the ground who have been fighting a proposed Nestle well since the well was purchased in 2016. 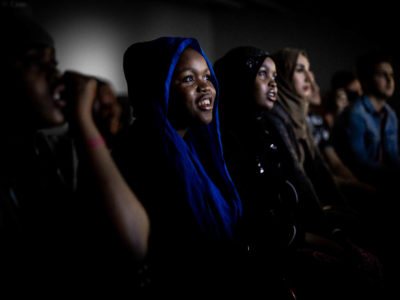