Damming the future? Livelihoods at stake on Mekong River 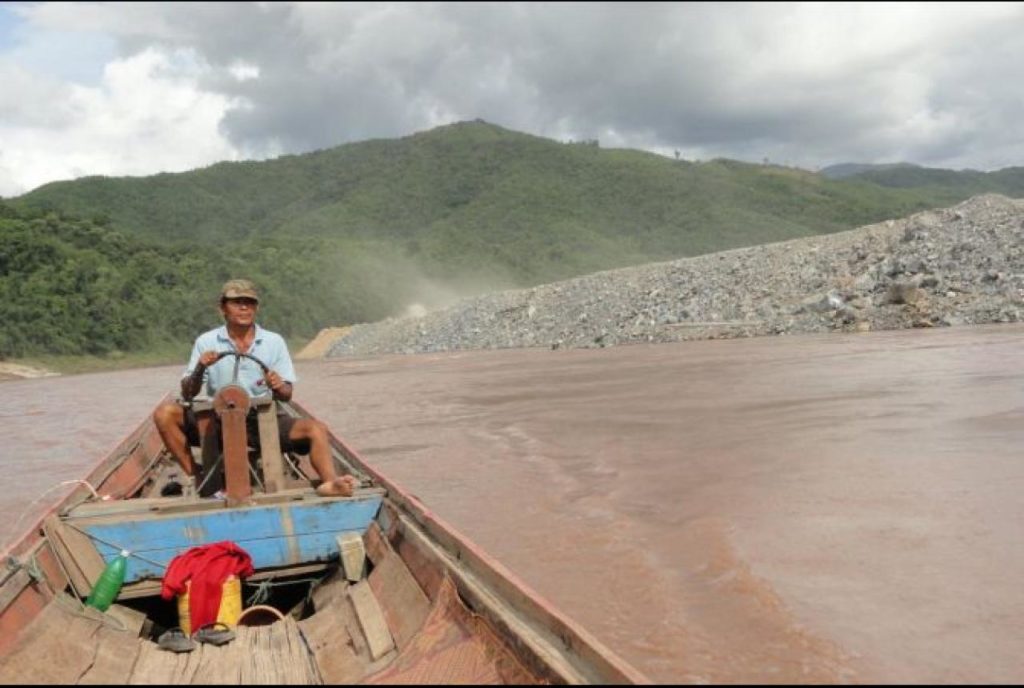 A boatman on the Mekong River, which is already experiencing major effects from dams built in China. The Xayaburi Dam on the Laotian part of the river could have devastating consequences for those who make their livings along the Mekong. - ((Samantha Page / Global Post))

NONGKHAI PROVINCE, Thailand and XAYABURI PROVINCE, Laos — Although his family has lived for generations beside the Mekong River, Itthapon Kamsuk thinks he might soon have to move.

During the dry season, from March to May, Kamsuk’s village in Nongkhai province in northeastern Thailand routinely runs short of water, and big fish are growing scarcer.

“The water level is already unpredictable, because of the dams in China,” the 45-year-old said. “Before dam construction, we lived peacefully. We could have fish all the time.”

Now, another hydroelectric dam is being built on the Mekong in a deal between the Lao government and a Thai construction company, despite an international agreement to protect water rights along the river and promises by Thai and Lao leaders to pause the project for further study.

The 1,260-megawatt Xayaburi is the first of 11 proposed mainstream dams that will affect agriculture, fishing and cultural heritage from its location about 100 miles upstream from Kamsuk’s village in northeast Thailand, through Cambodia to the Mekong River delta in Vietnam — the fertile heart of the world’s second largest rice exporter.

The Thai construction company, Ch. Karnchang, expects a 12-13 percent annual gross return on a $2.4 billion investment over its 29-year concession from the Lao government. The government, which will own the dam, also stands to profit handsomely by selling the electricity Xayaburi produces — largely to Thailand.

But the environmental and human costs of the project may far outweigh revenues that Laos, one of Asia’s poorest countries, expects to reap from its dams.

The only wide-ranging report on the project, a cost-benefit analysis from Portland State University, estimated that when loss of livelihood was considered, the development went from a $33 billion revenue source to negative $274 billion liability.

Livelihoods along the river in Laos and Thailand consist mainly of fishing and agriculture, with some panning for gold.

“My mother has a piece of land she farms for self-consumption. If there is any extra, we sell it,” Kamsuk said. He owns a small food shop.

In 2009, the average salary in the northeastern provinces of Thailand was 118,200 baht (US$3,735) per year, according to DBS Bank. The region has the lowest per capita GDP in Thailand — about one-seventh that of metropolitan Bangkok.

The area around the dam site itself, northwest of Vientiane and due east of Chiang Mai in Thailand, is sparsely populated. Villages of a couple hundred people sit half-shrouded from river view by the jungle.

Every few kilometers, a solitary fisherman clings to the rocky bank, methodically dipping a net attached to two long bamboo poles into the current.

Some 2,100 of these Laos will be resettled away from the site.

Villagers still in their homes say they expect to move next year, but two villages were relocated in January. The new houses already have termites, and photos from the resettlement show gaps between boards that were nailed down still wet.

The resettlement area has little agricultural land, no river access, and no forests for foraging, said Teerapong Pomun, director of Living River Siam, one of the groups bringing a lawsuit against the Thai state agency that agreed to purchase most of the dam’s energy.

“The are mostly fishing and agricultural people. They had a better life in the village,” he said. “They have only 0.75 hectares, and it is too late to plant for the growing season. They just sit at home.”

According to International Rivers’ Ame Trandem, relocated villagers were promised compensation, but that deal has already gone awry.

“They were told they would be compensated for everything, now it is just teak and fruit trees,” she said.

Downstream, Kamsuk is unlikely to get any compensation, so earlier this month he made the journey from Nongkhai to Bangkok, about 10 hours by bus, for a meeting with the Network of Thai People in Eight Mekong Provinces, a coalition of civil groups fighting the dam’s construction.

Next month the coalition will file a lawsuit against the Energy Generating Authority of Thailand (EGAT), which agreed to purchase 95 percent of the dam’s projected 7,200 gigawatt hours per year.

The network alleges that EGAT failed to adequately notify the public or get public comment before signing the deal with Ch. Karnchang in October. The suit points out that no environmental review for the impact on Thailand has been done.

“None of Thailand’s agencies have made any move to prevent the impacts,” said Sor Rattanamanee Polkla, the lead attorney for the suit.

The World Wildlife Fund says a study on a similar project on a Mekong tributary in Thailand, found that 85 percent of fish species were affected, with 56 species “disappearing entirely” and “reduced catches” for another 169 species. The WWF predicts the dam would spell extinction for the Mekong giant catfish.

The change in water fluctuations from the dams in China has already damaged the fish population in the Mekong itself. Most of the big fish are gone, Kamsuk said, explaining why he has joined with the network.

In 1995, Laos, Thailand, Vietnam and Cambodia signed an agreement pledging “to cooperate in all fields of sustainable development, utilization, management and conservation of the water and related resources of the Mekong River Basin.”

Under this framework, Laos has entered a consultation process with its neighboring countries over the Xayaburi Dam, but the agreement is somewhat less than binding.

“Laos is not seeking legal approval,” said Surasak Glahan, a spokesman for the intergovernmental Mekong River Commission, which estimates that 450,000 people will be affected. “The Mekong Agreement says the countries should reach consensus, but it doesn’t say a country cannot go forward.”

In a visit to the region earlier this month, US Secretary of State Hillary Clinton urged Laos to adhere to spirit of the agreement and to further study the dam’s impact.

“The Mekong River Basin is one of the world’s most productive ecosystems. It’s really a miracle of the way it operates in this region. Millions — tens, hundreds of millions of people — depend directly or indirectly on it for their livelihoods,” Clinton said. “Some studies have explored the benefits of generating electricity, but questions — serious questions — remain about the effects on fisheries, agriculture, livelihoods, environment and health.”

Cambodia has already sent a letter to its northern neighbor, asking that construction be halted, and Vietnam suggested postponing the plan for a decade, while additional environmental studies were carried out.

In the face of this outcry, Ch. Karnchang has publicly said it is only doing preliminary work, but a visit to the dam site in early July showed a flurry of activity — not only on access roads and offices, but also on a flattened piece of land jutting into the river and on the hillside adjacent to the dam site.

Executives at EGAT and Ch. Karnchang did not respond to requests for comment on this story.

“You can see that people are already pointing to the Laos government,” Pomun added. “If the problem happens in Laos, it will become a big issue for the ASEAN community. Right now, even though they haven’t completed the project, Ch. Karnchang has made a lot of money by selling stocks.”