GroundTruth Launches in Paris: The Silent March for Change 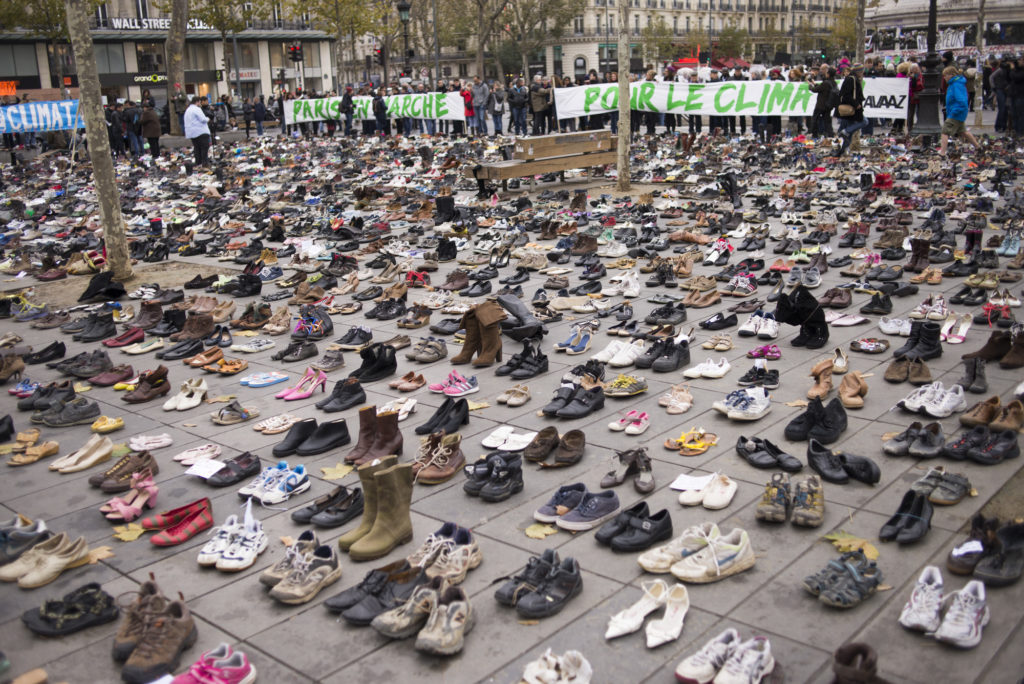 Twenty thousand pairs of shoes around the Place de la Republique in Paris show dedication to climate action, despite cancellation of a large, planned protest ahead of the COP21 talks. (Photo by Camilla Andersen/GroundTruth)

PARIS — A pair of tiny pink ballet slippers stood out amid a sea of 22,000 shoes lining the Place de la Republique, a picture of simplicity, innocence and vulnerability.

As world leaders and representatives from more than 150 countries began arriving in Paris on Sunday with plans to hammer out a historic agreement to limit climate change, a series of advocacy events around La Republique were intended to show how closely the rest of the world is paying attention.

At 6 a.m., volunteers arrived at the history-laden square in Paris that became a central gathering place after both the Charlie Hebdo attack in January and Islamic State attacks earlier this month. Flowers and candles encircled the statue of Marianne serving as a memorial of victims. But the volunteers began creating another memorial: rows and rows of shoes representing some of the marchers who could not attend.

The Global Climate March that had been scheduled for Sunday was supposed to break records as the largest  in the world. The event was designed over the last 18 months by Avaaz, a global movement that means “voice” in several European, Middle Eastern and Asian languages. Organizers planned for crowds of 400,000 or more to fly from every corner of the earth to express their support for an agreement at COP21.

But after the  Islamic extremist attacks on Nov. 13 that killed 130 people, French President François Hollande declared a state of emergency, canceling all public protests.

That could have been the end of the march. Instead, organizers devised a clever work-around. In just two weeks, Avaaz collected thousands of shoes from France and around the world—including footwear from Pope Francis and Ban Ki-Moon, secretary-general of the United Nations.

“They came from Parisians who were determined to have their views heard,” says Bert Wander, media campaigner at Avaaz. “It’s something that came from the Parisian people. That’s why I’m confident this won’t go away.”

It’s a message that has resonated around the world. Supporters in 175 countries showed up in full force to 2,300 events; organizers estimate that 720,000 people around the world joined together.

“There are record-breaking marches happening all over the world right now,” Wander says. “The world is marching this weekend.”

And, despite the ban on public gatherings, thousands still gathered in Paris around the rows of shoes at La Republique. Volunteers held signs and linked arms to form a chain symbolizing the world’s interconnectedness. Buddhist monks orbited the perimeter of the square with a message of mindfulness and the importance of climate action. An activist in a penguin costume waddled through the plaza, wearing a sandwich sign warning about harm to the Arctic. A rancher rode 900 kilometers from southern France to Paris on horseback to draw attention to the rally.

Some attendees even began marching—despite the moratorium on protests—chanting, “If no one walks, nothing will work.”

Clem, 33, wore dark sunglasses and wouldn’t share her last name. She said she was worried about retribution—both from the government and from terrorists. She holds a sign that reads “We Won’t Be Silenced.”

“I think the government is using the fear and the climate around terrorist attacks to silence protests that have nothing to do with it,” Clem said. She said she was disappointed that the march was cancelled—but more than that, she said, she feels “extremely powerless.”

“I’m very scared that by silencing the civil movement, the lobbyists will come to the table, and it’s only our side that hasn’t been able to express ourselves,” Clem said.

“What should be normal—protesting and showing your voice—is not passing on the legal side,” she continued. “They’re making criminals of us.”

The war against terror, Clem, pointed out, is never-ending. “Is that the kind of life we want to have for ourselves?” she asked. “Do we want that world?”

She is worried that the attacks on Nov. 13 will divert attention from one of the most important issues facing the world.

“That’s the point about long-term problems,” Clem said. “They’re never the most urgent, but that doesn’t mean they’re not the most important.”

Not everyone at the plaza abided by the rules. After the Avaaz event ended and the human chain un-linked to return home, some protesters marched around the square chanting about change. Paris’s riot police followed quickly behind, blocking off streets and firing tear gas.

Despite these peripheral skirmishes, however, the event was peaceful and powerful.

Paul Boutonnet, 22, is a student of history at the Sorbonne. He attended the event to show his support for a climate change agreement—and to pay his respects at the memorial for victims of the attacks. He is worried, however, that the attacks have diverted the public’s attention away from COP 21.

“If it hadn’t happened,” he says, “there would have been probably hundreds of thousands of people here.” Instead, officials estimate that 5,000 to 10,000 people arrived to show their support.

But Boutonnet and others who showed up are trying to change the narrative. Although they mourn those lost in the attacks, they are troubled by a longer-lasting concern: the changes human beings are wreaking upon the world.

Boutonnet hopes the Paris talks will represent a turning point—a place where the dialogue is changing from doom to hope.

As Boutonnet says: “If you are worried all the time, you can’t live.”

Melody Schreiber is a freelance journalist and a program manager at the International Reporting Project. She is reporting on climate change as a fellow with the GroundTruth Project.