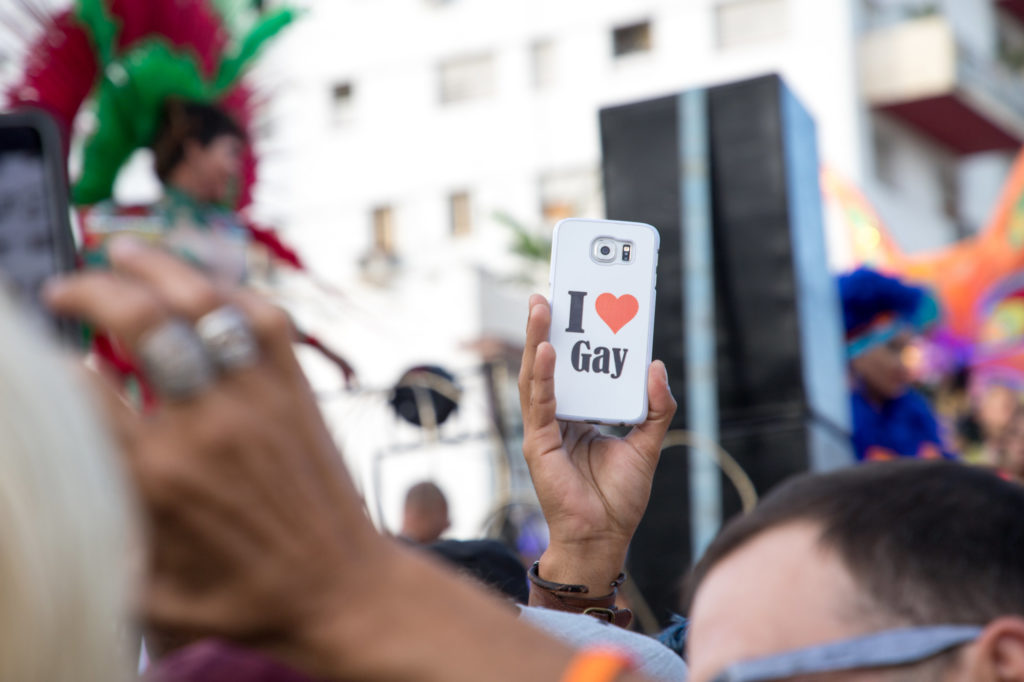 A phone case is held up at the International Day against Homophobia and Transphobia parade in Havana. (Photo by Jonathan Mejia/The GroundTruth Project)

HAVANA – On a hot and humid day in downtown Havana, the streets are filled with rainbows. One man wears a rainbow flag as a cape, another is covered in rainbow body paint. Young girls run through the crowd in different colored dresses, creating a swirling rainbow with their antics.

There are floats filled with a colorful cast of dancers and drag queens, all prepared to put on a show. Leading the group in a pristine purple convertible is Mariela Castro Espín, former president Raul Castro’s daughter, Fidel’s niece and head of Cuba’s National Center for Sex Education.

Amid all the celebration, Rafael Detiverce Benstei stands tall in a rainbow Mohawk, with a long rainbow flag around his shoulders.

“This event means for me that — for the whole world, for everyone, for Cubans —that being homosexual doesn’t mean having an illness or anything of the sort. Understand?” Benstei said as he stood with his friends, a small circle of calm in the chaos of the day.

It is May 12, and the Vedado neighborhood of Havana is celebrating International Day Against Homophobia and Transphobia. For a country with complex and sometimes violent persecution against the LGBT community only two decades ago, when gay men were forced into labor camps, Cuba has come very far, very quickly. But according to the community in and out of Cuba there is still work to be done. The Cuban LGBT community is in a period of transition. While tolerance and visibility have grown, the LGBT community is still vying for legal and social equality.

Historically, Cuba has had a more than poor track record with the LGBT community, said Emily Kirk, a research fellow in international development studies at Dalhousie University in Halifax, Nova Scotia, Canada. Kirk has done extensive research on the LGBT community in Cuba and was the first foreign researcher allowed in the National Center for Sex Education archives.

“Cuba was known for being one of the most prejudiced and homophobic country in the Americas,” Kirk said. “Homosexuality was considered a mental illness and a capitalist decadency.”

In the 1960s, the Cuban government imprisoned gay men in labor camps to make them “more manly,” and young boys were sent to boarding schools for the same reason. Homosexuality was legalized in 1979, but even then homosexual acts or open displays of affection such as holding hands couldn’t be done in public. Change began in the 1970s, when the Cuban Women’s Federation started to do research into sexuality. This work eventually turned into the creation of the National Center for Sex Education, now headed by Castro. Then in the 2000s, the center and Castro began to work on transgender rights — and in 2007, the country held its first International Day Against Homophobia and Transphobia celebrations.

Perhaps most significant in Cuba’s journey toward LGBT acceptance, though, was in 2010. Fidel Castro publicly acknowledged the country’s historically poor treatment of the LGBT community, and took personal responsibility for not paying enough attention to the problem.

“If you have to take responsibility, I assume mine. I’m not going to blame others,” Castro said in an interview at the time with the Mexican newspaper, La Jornada.

“What motivated that was the understanding that discrimination was detrimental to health and went against the socialist ideology of inclusion,” Kirk said. “It was significant because it not only gave this population a voice in some way, but also those who had been so prejudiced looked up to Fidel, so to see him apologize was very significant.”

Enrique Gomez, a sociologist at the University of Havana, said that the LGBT community has come far from the days of such extreme persecution, but the journey is far from over.

“This is going to be a long fight, and this is just the beginning,” Gomez said. “The LGBT community here has received a lot of progress, regarding to their rights and the way our society has viewed them. This is huge progress and discrimination based on sexual orientation is one of the types of discrimination that the revolution didn’t end completely.”

But one thing is for sure, according to Castro Espín: Change is coming to Cuba.

“A lot has changed because it’s the [LGBT] policy of the Cuban state,” she said in a interview during the parade. “For all of us it means steps of advancement in the politics of the revolution.”

This state of transition can most easily be seen in Cuba’s legal code. Like many rights and protections built into the laws here, a person’s right to participate in the LGBT community is neither illegal nor protected by anti-discrimination laws.

Andy Aquino Agüero, director of the department of community work at the National Center for Sex Education in Havana (abbreviated to CENESEX in Spanish), said this is because all of Cuba’s laws should apply to all of Cuba’s citizens in theory.

“Cuba has very few laws that explicitly talk about the rights of the LGBT community,” he said. “All of the rights established for all people, whether part of the community or not. So you shouldn’t have an individual loss. But the social practice demonstrates that, depending on your identity, you lose some of those rights.”

Look no further than LGBT marriage or adoption as an example: Under what’s known as the Family Code in Cuban law, marriage is defined as a legal contract between a man and a woman. Those who are considered “men” or “women” are defined by their genitalia. If legislators moved to make gay marriage legal, Cuba would have to alter the language of the Family Code, which can only be done by modifying the Constitution — a slow and unwieldy process.

First, the national assembly would have to approve the change. Then it would go through a referendum requiring approval by a majority of the Cuban people.

However, Agüero said that CENESEX will not wait for all of society to be ready for change.

And the center seems prepared to back that statement. Just this year, Castro announced she will push to legalize same sex marriage in Cuba.

“We have new proposals that do not consist of drafting new laws and are working on modifications of laws that already exist in our Constitution so that they are more expeditious, such as marriage between people of the same gender,” said Castro Espín, according to Latin American news outlet, Telesur.

While it may take a while for legalization, the Cuban government is taking steps in that direction. On July 22, The New York Times reported that lawmakers passed a draft of a new constitution which changes the legal definition of a marriage to a union between “two individuals.” Lawmakers do say that more legislation would be needed to officially legalize same-sex marriage, but it is certainly a marked change.

The current prohibition of gay marriage is clear, there is some confusion about whether or not gay couples can adopt. Technically, the Family Code doesn’t explicitly say they can’t. But it does say that a couple must be married in order to adopt, Agüero said.

“[The Family Code] establishes that the core of a family is established by marriage,” he said. “It’s not that they can’t adopt … A single woman can’t adopt either, because you have to be married.”

That isn’t to say that there hasn’t been progress in terms of legal LGBT rights. One of the key updates is the work code, Gomez said. It now says that people can access jobs regardless of their sexual orientation.

Castro and her powerful position as head of CENESEX are behind many of the advances for Cuba’s LGBT community. While it is a government program, Agüero said, the center treats sexuality as a public issue, and as such maintains that the government should advocate for people in the LGBT community.

“All elements of sexuality should be seen as public policy,” he said. “That means the government has a duty to allow people to develop sexuality from a social justice approach. The opportunity to access all surfaces and real participation in the decisions of the services.”

While the center does not have any legal power, Castro often promotes laws on the behalf of CENESEX as a member of the national assembly.

“I really think the National Center for Sex Education was a key piece,” said Brandon Fox, an associate professor at the Stephen F. Austin State University in Texas. “With the daughter of Raúl leading that, and very passionate in that and had a lot of influence. And was very structured in her approach.”

Things are changing with Cuba’s younger generations, which have grown up without the fear and prejudice that their parents and grandparents often had at their age. Many young cubans don’t know about the harsh treatment of LGBT people after the revolution — it’s a long forgotten history.

“You have to take into account [that] some generations, when they were in high school, their textbooks used to say that homosexuality was an illness,” Gomez said, “so we have to rebuild the mindset people have.”

Once while walking down the street in Havana holding hands with his boyfriend, he said a drunk older man started shouting at them. As the man got more aggressive, the man’s son came out to stop the behavior and apologized to Ulloa.

“I think that, for millennials, it has been very easy. Older generations were raised in this period of not accepting it,” he said.

“Young people are familiar,” he said. “My niece had a transgender performer at her birthday party. She is 5 and used to seeing transgender people and gay couples. Our society has made progress.”

Rodriguez said the key is to continue to focus on educating the rest of Cuban society.

“We have to educate people so they accept our lives,” he said, adding: “Now gay couples live together and no one says anything.”

Ulloa, too, said he feels that acceptance is gaining momentum in Cuba.

“I think that Cuba is moving in the right direction and every time we will have more acceptance,” he said. “We are all people and all Cubans.”