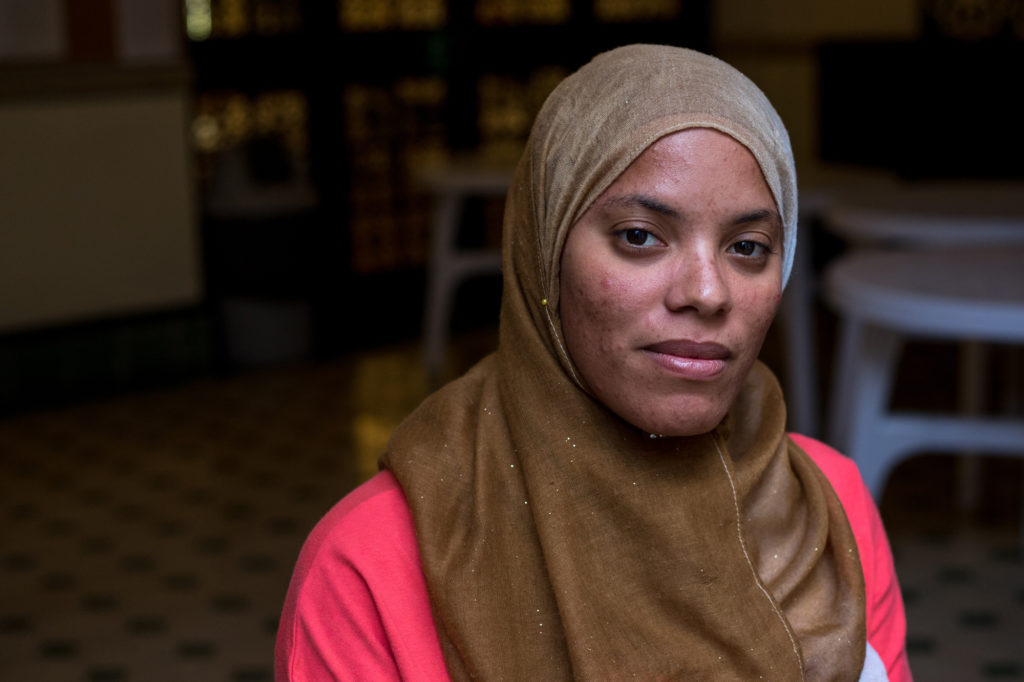 Isqura Arudin, 33, faced religious discrimination at her job as a teacher. She said she was told, ‘you are Muslim and with that thing on your head you can’t work in Cuba,’ for wearing a hijab. (Photo by Riley Robinson/The GroundTruth Project)

HAVANA, Cuba – In a small living room in central Havana, a group of Cubans crammed together with Pakistani medical students to practice Islam. As the fan oscillated in a simple space, the students shared their experiences back home as they prayed and read the Quran.

Samir Medina, a Cuban convert who practiced with the Pakistani immigrants, said the ad hoc worship reminded him of how the small community got its start in the capital 13 years ago.

In response to the deadly Kashmir earthquake in Pakistan, the Cuban government offered 1,000 Pakistanis refuge in 2005. The majority of those who immigrated to Cuba studied medicine throughout the island.

“They were doctors here and they spread out over all of Cuba, from Guantanamo to Isla de la Juventud,” said Medina, who is in charge of opening the call to prayer —a ritual that takes place five times a day depending on where the sun is in the sky. He spoke through a translator.

“They had a big impact. They prosthelytize a lot. They would convert Muslims in their provinces and open homes in the provinces they went to.”

Though many of those Pakistani students returned home, they left behind the foundation for a community that’s since grown. In 2005, there were 500 Muslims in Havana, according to Pedro Lazo Yahya, the president of the Cuban Islamic League. That number grew every year, and in 2015, Saudi Arabia provided the Cuban government funding to build a mosque over an antique car museum in Old Havana. Yahya said he couldn’t disclose the amount.

The number of Muslims on the island has now reached 7,000 – indicative of a religious congregation that’s firmly established and steadily rising.

Underneath a small green and white minaret, the one-story mosque, named Mezquita Abdallah, resembles a colonial style box more than the traditional sweeping architectures mosques are known for. It was opened in 2015 on the first day of Ramadan, Islam’s ninth and holiest month.

Yahya sat in a white, plastic chair in the mosque’s foyer area on a recent Tuesday evening, just past the mosque’s large wooden double-doors, exhausted from another long day of

fasting. The mosque was halfway through celebrating its third Ramadan. Yahya scanned the room as people shuffled in and out, preparing for evening prayer. After 38 years as a Muslim, he said he is proud of how far this community has come.

Cuban converts make up 4,000 of the 7,000 Muslims in the city. The mosque’s establishment contributed to the shift in majority, Yahya said.

“There were a lot of foreigners but it was the native Cubans who now organize this community,” he said, through a translator. “Now there’s more visibility. People can take more interest.”

Prior to the mosque’s construction, Muslims gathered in designated homes called masalas to practice, including Casa de los Arabes. It is among the most popular and served as the provisional place of worship for 22 years, said Yahya, who owns it.

The impromptu worship house sits directly across the street from the mosque.

“It was like coming to the mosque,” said Muhammad Giovanni Vazquez Pardo, a Cuban convert of 24 years, through a translator. “His house was without a lot of ostentatiousness. It was simple: a couch, an armchair, a rug. You just do your prayer on the floor or even outside in the open air.”

It became a holy house, but it was small — about 20 feet long, Medina said. So small that when more Cubans began converting, the house didn’t have enough space for them.

The need reached its peak during the final day of Ramadan in 2014 when 600 Muslims prayed on a concrete floor in a park near the aquarium in west Havana. Yahya said it was the only space nearby big enough for all of them and described the scene as a “sea of men and women adoring god.”

The unity of today’s greater Muslim congregation is a recent development. Soleymon Mustafa, who has practiced Islam for five years, recalls a time when he thought he was the only Muslim in Havana.

“I thought I was crazy because I thought no one else was a Muslim and I would practice alone in my house,” said Mustafa, who began practicing Islam on his own. “One day, I was walking on the street and I saw one of the brothers who’s here today and he was just a man with a long white beard and I asked him, ‘are you Muslim?’ That’s how I found out about this community because I didn’t think there was a community before.”

Islam is still small in Cuba, making up only 7,000 people — .01 percent of the 11.2 million-person population, Yahya said. The majority of Cubans identify as some form of Christian, with 60 percent identifying as Catholic and 5 percent identifying as Protestant, according to a 2016 report done by the U.S. State Department. The report estimates that 13 percent of people identify as someone who practices Santeria, a religion rooted in West African practices. But numbers aren’t clear because the religion is “commonly intermingled with Catholicism.”

The recent growth of this community came with growing pains. Isqura Arudin, 33, said she was told she couldn’t teach if she wore a hijab, a traditional Muslim veil worn by women.

“One day they told me that I had to leave, and I asked ‘but why?’ And they said ‘you are Muslim and with that thing on your head, you can’t work in Cuba.’ And I had to leave my job,” Arudin, a Cuban convert of two years, said in Spanish through a translator.

She got her job back after threatening to take her case to court.

Cuban Muslims have not been immune to misconceptions and stereotypes, either. Yusuf Ali, 26, works as a demolitionist who helps tear down buildings. While at work, he has been asked questions that associate Islam with violence.

“If I’m working on a house, a lot of times, it comes out with food,” Ali said through a translator. “They’ll offer me pork, I’ll say no. They’ll ask if it’s because of an illness and I’ll say it’s because of my faith, I’m a Muslim. They’ll confront me and ask me, ‘Oh aren’t Muslims violent, aren’t they terrorists?’”

Seated in a circle among their fellow Muslims on the brown carpet that covers the entire room Ali and Arudin said these stories are abnormal for the greater community. They said they believe most Cubans are welcoming of Muslims.

Leonel Diez Sterling, a Yemeni-Cuban and a third-generation Cuban Muslim, said he believes Cuban society has grown to accept its diverse religious populations.

Above two large calligraphic paintings meaning ‘praise God and his mercy’ and ‘Allah,’ the the Imam sang the call to prayer at 8:20 p.m., signaling to the congregation it was time for Maghrib, the evening service. Quickly, around 250 Muslims took off their shoes, funneled in through the large glass doors from the foyer and found a place near the Imam to begin. The fasting for the day had come to an end.

The men cycled back and forth between the foyer and the large worship rooms, bringing plastic, white tables and chairs for the evening dinner service, during which rice and beans are typically served with potatoes, salad and lamb or chicken.

The one-story mosque holds enough space for daily prayers, but as the congregation continues to grow, a more spacious mosque will be required, Yahya said.

Sterling said he remembers showing up “a little bit late” on the final day of 2017’s Ramadan and having to perform his prayers near the entrance of the mosque because there wasn’t any room left on floor. Mustafa, who arrived after Sterling on that day, had to stand in the cobblestone street.

“When I first started coming here, the mosque was only half full. But this past Ramadan, there were so many people, I had to pray in the street,” Mustafa said.

According to Yahya, Cuba and Saudi Arabia have laid out a plot of land equivalent to a large park for a new mosque near the western Bay of Havana, along the Fabrica, a main street in southern Havana. He said that negotiations are still ongoing and no timetable has been set but he “expects it in short time.”

As Ali sat next to the Cuban friend and Muslim who converted him, he said Cubans have become the majority of the country’s Muslim population because they’ve taken on the role of spreading Islam to other Cubans, a role that used to be shared with immigrants. Even Ali, a younger convert of just two years, knows the impact they’ve had on the community.

“The first group of immigrants that came were the Pakistanis,” Ali said. “They were the first to have a migration here for education and join our community. After them, a lot more other groups started coming.”

While Medina sat underneath a large Arabic calligraphic painting that said ‘God is great,’ he recalled his experiences practicing with the Pakistani immigrants and laughed.