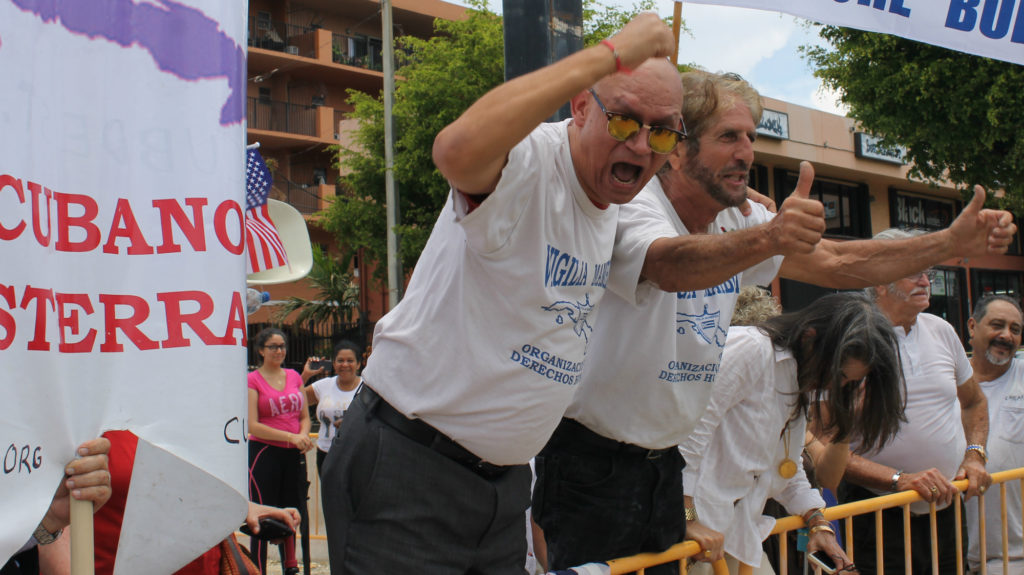 MIAMI — When President Obama visited Little Havana in 2014, hundreds of anti-Castro Cubans turned out to show their opposition to renewed relations between the U.S. and the island.

But Obama, with help from Pope Francis and Vatican diplomats, continued to normalize U.S.-Cuba diplomatic relations and lifted the travel ban, changing the mentality of many Cubans.

So as President Trump visited the neighborhood that is home to thousands of Cuban exiles to sign new restrictions on travel and business with Cuba last week, the muddy roadway outside the Manuel Artime Theatre surged with supporters of a closer relationship.

The anti-Trump crowd sang the “Guantanamera” and demanded an end to the Cuban embargo, which Obama kept in place. On the other side stood an older generation of Cubans waving pro-Trump flags and accusing reformers of being “communists.” 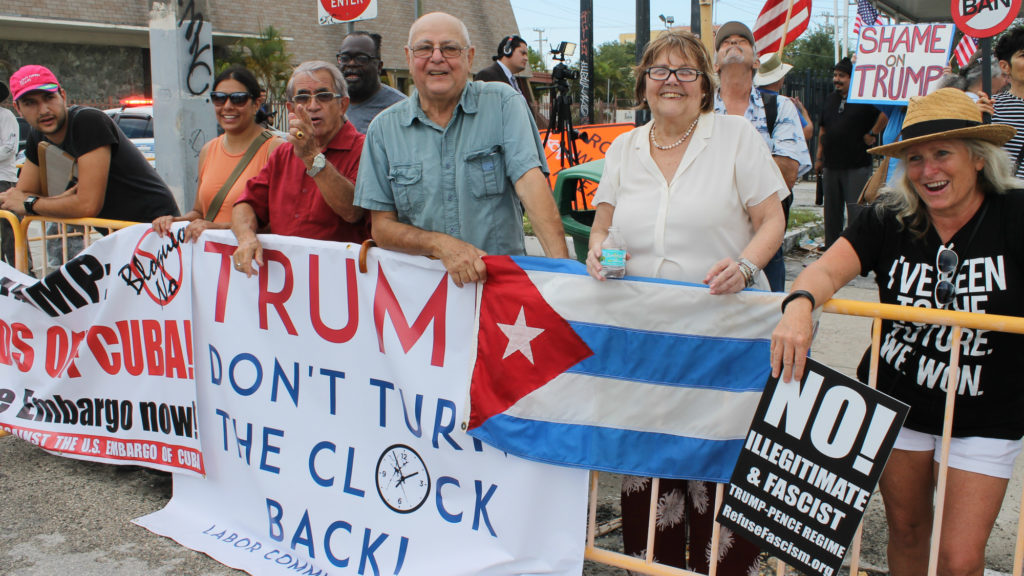 Under Trump’s new policy, Americans will no longer be allowed to visit Cuba on their own private trips, which had been possible under 12 categories of travel announced by the Obama administration in December 2014.

Americans are also now forbidden from patronizing Cuban businesses linked to the country’s military, which controls an estimated 60 percent of the Cuban economy including significant holdings in the hotel, restaurant and car rental industries.

Other Obama-era reforms remain in place and the division in the Cuban community is palpable, now more than ever. After decades of standing by the Republican Party, many Cubans are rapidly shifting to more progressive principles and approaches toward the island. According to a survey by the Pew Research, around 47 percent of Cubans identified as Republicans in 2014. This number was 64 percent a decade ago.

A New Generation of Ideas

This new mentality of openness between the two countries wasn’t easy for many to adopt. For Elena Freyre, coming to terms with her support of diplomatic relations was a journey.

Freyre was born in Cuba, but she said she didn’t return for many years, after she left in 1960, when she was 10 years old.

“I went for the first time when Pope John Paul II went and it opened my eyes,” said the 67-year-old. “That’s our homeland. What’s happening today has nothing to do with human rights. It has to deal with power. It has to deal with a group that doesn’t want to let go of its power.”

Freyre is now president of the Foundation for Normalization of Relations between the U.S. and Cuba, also known as FORNORM in Spanish.

“I want Cuba to have the opportunity to find its own path without any other country interfering with its right to find that path,” she said as she held a Cuban flag during Trump’s announcement.

But like Freyre, Cubans of all ages are becoming more interested in Cuba and the issues that surround it, even if it means going against their families at times.

This is particularly true of the millennial generation, which wants a role in shaping the new Cuba.

Chris Vazquez, a third generation Cuban-American, was born in the United States and so were his parents. His story is quite common in Miami.

Vazquez’s parents have never been to the island, but the 21-year-old has already visited twice. He is also the chairman and president of Inspire Cuba, a non-profit humanitarian organization.

“You have these politicians, and they’re telling you that they’re crafting this Cuba policy, politicians who have never stepped foot into Cuba, never engaged with a Cuban person in Cuba,” he said. “And they are crafting these harmful policies, and they have the audacity to tell us — the American people — that it’s good, that they want to do what’s best for America and for Cubans alike, and that’s just not the case.”

Vazquez refers to Sen. Marco Rubio and Rep. Mario Diaz-Balart, two of the key lawmakers who helped persuade Trump to reverse some of Obama’s policies. The Miami Republicans and second-generation Cuban-Americans worked for months with the Trump administration to limit relations with Cuba.

On the other side of the Miami street during Trump’s announcement, a smaller but passionate crowd stood by the president and his new restrictions.

They hold megaphones and ask for “libertad,” or freedom, for the Cuban people. Many of them have never been back to Cuba after exile. Some are second-generation Cuban-Americans who have never been to the island.

For these people, relations between the U.S. and Cuba must end, at least for as long as the Castros are in power and until Cuba becomes a democratic country.

Maria Falcon, a Cuban who left the island 40 years ago, believes the communist regime is stealing money with the current tourism system.

“If there’s an embargo, they should not be taking all they money they’re taking,” Falcon said.

Pedro Luis Perez, a 21-year-old University of Florida graduate, left Cuba 13 years ago. Although he has been back to the island, he remains a strong critic of the Castro government.

While Perez supports a U.S. embassy in Cuba and diplomatic relations, he said he doesn’t fully approve of all the policies adopted by Obama in 2014.

“We are seeing the enrichment of a small number of Cubans in the island, but at the end of the day, when other Cubans rebel against the government, those few Cubans that are enriching themselves from tourism, those Cubans are not going to defend the Ladies in White, who are beaten in the street,” Perez said.

“All this is happening, and meanwhile, you have a growing tourism industry which is doing nothing to help these people. In a sense, the people that are enriching themselves with the opening of Cuba and more tourists, those people are complicit with the government,” he added.

Perez, like many others, believe Trump should have been stricter on the island with his new policy.

“The one thing I’d have changed would have been to place Cuba in the list of countries that sponsor terrorism,” he said.

In the early days of Castro and the 1959 Cuban Revolution, the Cuban government saw the Catholic Church as its enemy. However, in 2014, the Catholic Church was in the spotlight as one of the catalysts for the restoration of U.S.-Cuba relations for the first time in more than 50 years. This surprised many.

Pope Francis quietly helped spur the change by facilitating talks of normalization with the island. He worked with Obama and Raúl Castro — who took over from his brother Fidel in February 2008 — as the two leaders continued to agree on new reforms in 2015 and 2016.

Now, even under President Trump’s administration, the Church remains optimistic about the future of U.S.-Cuba relations.

“I look at it as a glass half full, because the major parts of the approach to Cuba still stand,” said Thomas Wenski, Archbishop of the Archdioceses of Miami. “The flights, the direct flights, not charter flights are continuing. Cruise ships are continuing. Diplomatic relations continue.”

Wenski said he expects the two countries to keep talking.

Wenski, who has traveled to Cuba several times and even visited the country with Pope Francis, said the Church will keep helping the evolving diplomatic relations.

He said the Church wants a transition to take place on the island. And for the most part, that transition is already in motion, albeit rather slowly.

The Church’s influence in Cuba doesn’t stop at diplomacy. Part of this transition also includes building a new Catholic church in the country. The church, which is under construction, marks the first Catholic church in 60 years to be built on the island.

“It’s the Church’s interest that there may be a soft landing, and not a hard landing,” Wenski said. “Hopefully, the United States will be able to play a role in assuring a soft landing and understanding its own limitations.”

However, Wenski said he recognized the solution won’t be created in Washington. Instead, it must come from the Cuban people.

“A solution imposed by Washington would probably be, in the long term, unstable, and not perdurable as solutions imposed by the United States on the Middle East, for example, that have proven to be less than perdurable,” Wenski said.

The Archbishop recognized the need to acknowledge the past.

“As we look forward to a different reality in Cuba, we have to remember that we cannot build a future of hope on the basis of resentments.”

Amaury Sablon is an Overseas Press Club Foundation reporting fellow with The GroundTruth Project reporting on the role of religion in shifting U.S.-Cuba relations.