COVID (Mostly) and Beyond: India’s 10 Biggest Health Stories From 2021 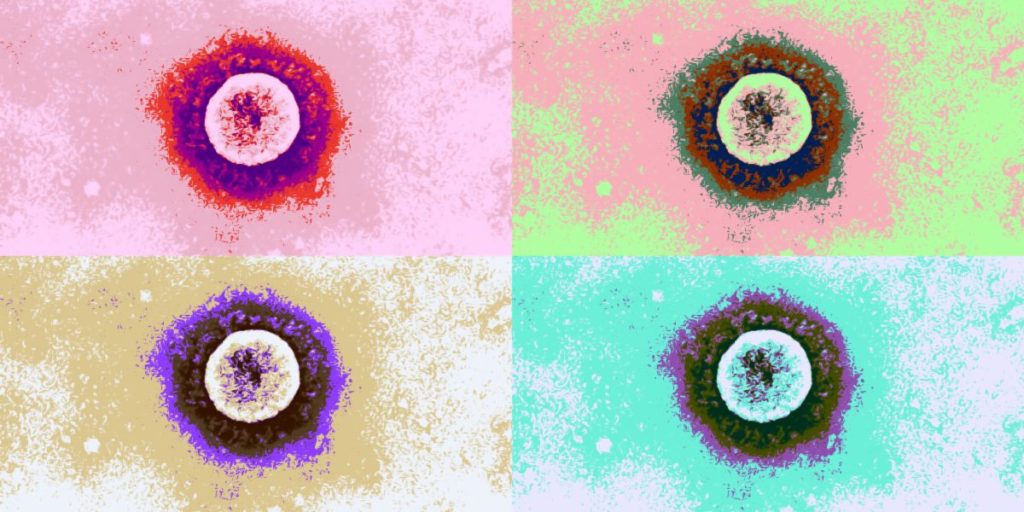 A modified image of an electron microscope image of the novel coronavirus. (Image by: NIAID/Flickr, CC BY 2.0)

As 2021 draws to a close, here are 10 major developments in India’s healthcare sector that defined the year.

In the last quarter of 2020, various countries began to evaluate and approve the world’s first COVID-19 vaccines, manufactured by Pfizer, Moderna and AstraZeneca, for use. India also prepared to roll out its vaccines: Covishield, the AstraZeneca shot made and sold by Serum Institute of India, and Covaxin, developed by the Indian Council of Medical Research and Bharat Biotech and sold by the latter. But the manner in which the national drug regulator approved Covaxin – sans phase 3 trial data and in “clinical trial mode” – took the country’s, and the world’s, scientific community by surprise.

2. First signs of a second wave

Sometime around mid-February, India received early signs that a second major COVID-19 outbreak was coming up. The national case load was climbing after five months and the basic reproductive number seemed to persist above 1. But other than a handful of researchers, not many took the signs seriously – including the Union government, which constantly denied that a surge was in the offing. The missed alert would turn out to exact a very heavy toll.

Even as the number of cases kept rising in India from February, researchers in the country reported a new variant of the novel coronavirus. The director of the National Centre for Disease Control, Sujeet Singh, called it a “double mutant” variant – a term scientists criticised since any new variant had to be a combination of mutations (just one mutation doesn’t make a new variant). The variant had actually been found in October 2020; just the announcement took five months. The WHO later called it ‘delta’, and wreaked havoc in multiple countries, including India, in the second half of 2021.

India witnessed one of the worst human tragedies in recent memory from April to June, with an unprecedented number of COVID-19 cases and deaths being reported on a daily basis. The world watched with horror as the country’s healthcare system imploded, especially once the number of daily new cases crossed the 1 lakh mark in April. Patients were gasping for air – often literally – because supplemental oxygen was in short supply, as were medicines and beds. Many died without timely care, and crematoria fires burnt 24/7. On May 7 alone, India logged 4.15 lakh new cases.

5. A new but old enemy: mucormycosis

Just as the worst of the second outbreak was fading, India ran into another crisis. An epidemic of mucormycosis – colloquially called ‘black fungus’ – broke out among a larger number of people recovering from COVID-19. By June, more than 30,000 people had got the infection, and more than 2,000 died. Some patients had to have their eyes removed to prevent the fungal infection from spreading to their brains. Until then, India had been reporting around a hundred mucormycosis cases a year. A common theory to explain the surge was that doctors had overused steroids to treat patients with COVID-19, which increased their blood sugar levels and laid the ground for the fungus to take root.

The number of COVID-19 cases in the country began to decline from around July, prompting various state governments to begin lifting restrictions in a phased manner, often in consultation with the Union health and home ministries. By August, life around the country had returned to the ‘new normal’.

After protracted deliberations, a technical team at the WHO listed Covaxin on its roster of vaccines approved for emergency use on November 3. By this time, Covaxin had been part of India’s COVID-19 vaccination drive for 10 months. Bharat Biotech, Covaxin’s manufacturer, had applied for approval with the WHO in April 2020. In these months, the WHO team had multiple meetings to review the company’s data and, unconvinced, kept asking for more information. And once the WHO’s approval came through, Bharat Biotech managing director Krishna Ella courted controversy when he blamed a “negative campaign by a section of media and politicians” for the WHO’s late approval. The UN health body dismissed his charge.

India restarted COVID-19 vaccine exports from October, but with much less fanfare this time than earlier in the year. The government had paused exports after it was heavily criticised for exporting doses when most of its own people were yet to be vaccinated. In October, India exported one million doses of Covaxin to Iran; The Wire reported that  it was a grant-in-aid delivery. Three more consignments were flown to Nepal, Bangladesh and Myanmar in the same month. Both Nepal and Bangladesh received a million doses of Covishield each, as part of their deals with Serum Institute, and Myanmar received a million doses of Covaxin as a grant-in-aid.

On November 22, scientists in South Africa reported a new variant of the novel coronavirus, which the WHO called ‘omicron’. India registered its first case of the variant on December 2, and prepared to strengthen infrastructure and bring more healthcare workers to the frontlines. However, the exact opposite happened. Young doctors in many cities launched protests to demand that the government begin academic counselling for medical students who had passed the NEET-PG exam post-haste. Doing so would clear the way to admit close to 50,000 junior residents in hospitals (they also treat patients as part of their study). Their protests are still on.

2021 was bleak because of the number of people who died – but there was one distinct ray of light, and hope: the WHO approved the world’s first malaria vaccine. According to the latest World Malaria report, 241 million people in 85 countries had malaria in 2020, and 627,000 of them died. Some 83% of all cases in Southeast Asia were in India alone. The new vaccine, ‘Mosquirix’, is the first against any parasite, and it saves one life for every 200 children vaccinated. Many children suffer from repeated episodes of malaria in a single year and Mosquirix promises to reduce such recurrence by 40%. It could very well be a game-changer for the children of Africa, and soon for the whole world.