ON THE GROUND IN ANNAPOLIS, MD 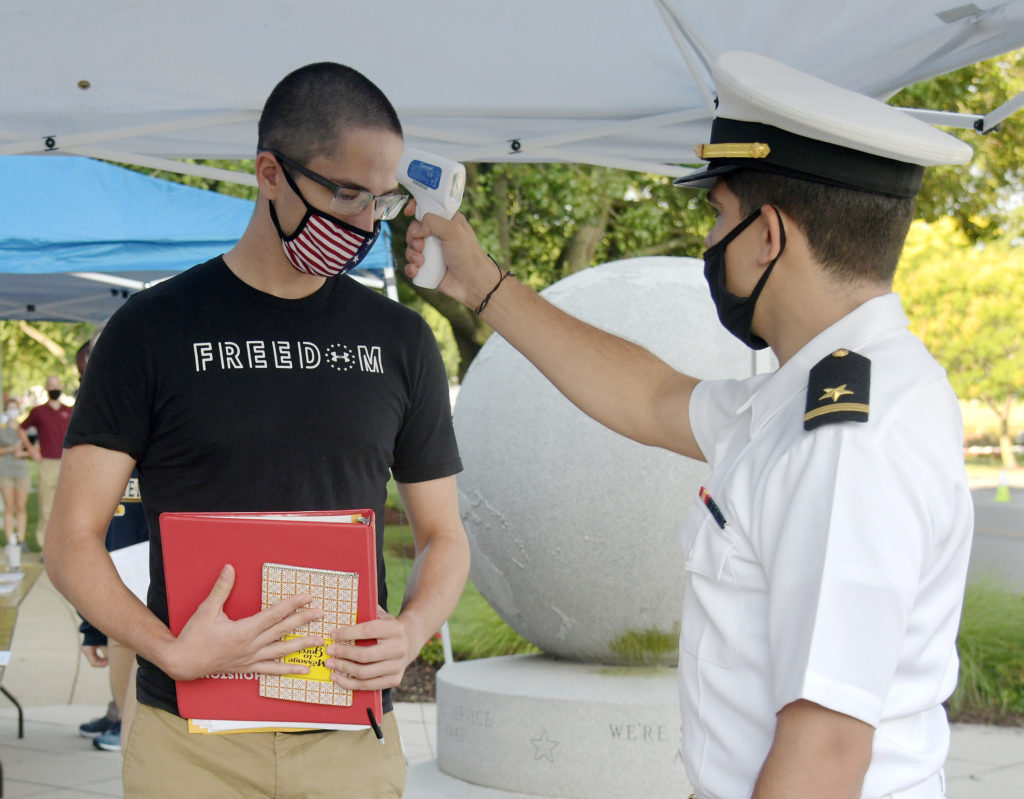 Plebes, or incoming midshipman, have their temperature checked to screen for COVID-19. The incoming midshipman arrived at the United States Naval Academy to begin their "Plebe Summer" of training during a COVID-19 modified Induction Day. (Photo by Paul Gillespie/The Capital)

ANNAPOLIS — The latest blow to the morale at the Naval Academy came by email. This year, as the COVID-19 pandemic altered the fall semester drastically, the midshipmen, or students, would spend Thanksgiving on the yard instead of going home.

“The COVID-19 pandemic and our association protocols do not afford the opportunity for the entire organization to go home and return as we would like for a normal Thanksgiving,” Commandant of the Midshipman, Capt. Thomas R. Buchanan, wrote in an email to the school.

The Naval Academy, established in 1845 and currently home to approximately 4,600 midshipmen, was early in announcing that it would bring students back to campus with in-person classes starting in the fall.

As other colleges navigated the containment of potential COVID-19 spread by limiting social gatherings or mandating a digital curriculum, the academy elected to create a “bubble.” For the summer and beginning of the fall semester, midshipmen were not allowed to leave the campus.

“I have never seen the morale of the brigade this low in my four years here,” a 1st class midshipman — the academy equivalent of a college senior — said in an interview. “I am seriously concerned that there will be a successful suicide attempt in the future.”

Like much of the country, the Naval Academy is examining how it conducts its mission of developing naval officers dedicated to a career of service in the midst of two crises: the coronavirus pandemic and the reckoning of racial inequality and systemic racism at the academy and within the Navy. The academy’s superintendent and the secretary of the Navy are currently being sued by a midshipman attempting to prevent them from expelling him for racist and inappropriate tweets he posted over the summer.

Morale and mental health have recently suffered at the academy, likely due to the restrictions academy leadership imposed because of the pandemic. While midshipmen were granted the ability to go into downtown Annapolis beginning three weeks ago, their limited liberty prior to loosened restriction contributed to mental health decline among the brigade, further strained by poor food standards and lack of communication.

The conditions led some midshipmen to decry the standards of the academy, especially through anonymous Instagram accounts and popular anonymous app Jodel.

Posts, possibly from midshipmen, talking about suicide or self-harm on Jodel increased mental health concerns among midshipmen, who said leadership did not acknowledge mental health. Midshipmen asked that their names not be used out of fear of retaliation.

After a few weekends of town liberty and Air Force-Navy week, which leads up to the Air Force-Navy game, morale seemed to improve among midshipmen, who pranked each other on public Instagram videos.

“I’d say morale has definitely improved since we’ve been given liberty, but the news about Thanksgiving really hurt,” the 1st class midshipman said. “I hope that as the weeks go on we can continue to do liberty better and get us more privileges, so we have the chance to go off the yard for Thanksgiving weekend.”

The announcement about the fall holiday led to the rise of a familiar question among the midshipmen: Why will the academy not allow them to finish the semester remotely?

The argument from Naval Academy leadership in all of its messaging is that leadership cannot be taught remotely.

The Naval Academy, whose alumni include the late Sen. John McCain and former President Jimmy Carter, is at its heart a service academy, with midshipmen tuition covered in exchange for five years of military service. But the majority of those who attend the academy are the same age as college students.

“We are teenagers and students in our early 20s who are confined to our rooms and very limited resources, yet are still expected to pursue moral, mental and physical excellence,” a 3rd class midshipman said. “On the other hand, the leadership gets to go home to their families every night, sparking a great divide.”

When the academy brought back the current midshipmen — through a staggered reform of the brigade over weeks instead of the customary single weekend — and introduced the new plebe (freshmen) class, each midshipman was required to complete two weeks of restriction of movement, during which they could not leave their rooms.

The staggered return made Thanksgiving break seem unlikely, said a plebe, since midshipmen would have to go back into restriction of movement for two weeks.

Lack of communication from leadership, including about how many cases of COVID-19 were at the academy or how many were in isolation, was one of the primary concerns among midshipmen, several said. The exact number of cases is not publicly available due to operational security, Cmdr. Alana Garas told The Capital.

Less than 2% of the brigade of midshipmen tested positive for the disease caused by the coronavirus, Garas said. In the month leading up to a Board of Visitors meeting in early September, 14 members of the Naval Academy community, including midshipmen, faculty and staff, tested positive, said Superintendent Sean Buck at the meeting.

But a New York Times article, which listed seven cases at the Naval Academy in August, prompted midshipmen to question whether the academy was lying about their numbers, the 3rd class midshipman said. Garas said she did not know how the New York Times got its number.

“I think that’s a source of a lot of frustration,” he said. “Like any feedback is just yelling into the void.”

“When it’s done anonymously, then I don’t know how we’re supposed to find someone to give them resources,” Reese told The Capital.

He does acknowledge the stigma around mental health services in the military, which some midshipmen say leads to hesitancy in reaching out.

Not every midshipman feels his or her mental health has been affected, with some saying the time without liberty allowed them to better explore the campus.

While morale is up — the 1st class midshipman recently ranked it a four or five on a scale of one through 10, instead of a two — it could easily take a turn for the worse. In the school-wide email regarding Thanksgiving, the academy announced the end dates for the semester but left winter break plans to be determined.

The “looming threat” that Christmas will also be taken away does not help increase morale, and will likely be further damaged if the midshipmen’s fears come to pass.

“I think it would be really bad,” he said. ”Like pre-liberty bad, or worse.”

Heather Mongilio covers military affairs for The Capital. This dispatch is part of a series called “On the Ground” with Report for America, an initiative of The GroundTruth Project. Follow her on Twitter: @HMongilio