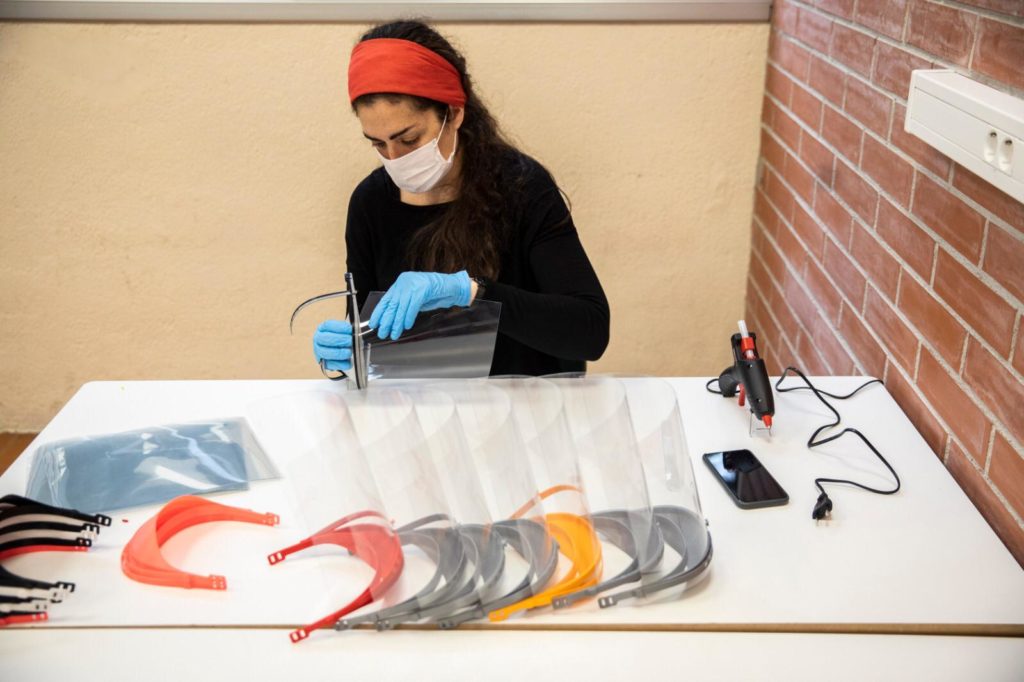 A volunteer assembles face shields produced by the maker community of Barcelona. (Photo by Santi Palacios)

BARCELONA — At a glance, the operating room looks like any other. Nine people in scrubs gesture for silence as another records the procedure. The patient is lying on a stretcher and, connected to a ventilator, takes a breath. The intervention is a success, and although the “patient” is a pig, he’s helping test a machine that will save human lives.

As the camera pans from the pig on the stretcher to the machines helping it breathe, the man recording says in Spanish, “It’s 1:07 and we’re 43 minutes into the test. The indicators that the animal shows are completely normal. The machine works perfectly.”

The camera turns for a moment to a small, transparent plastic box housing a green pump that directs air through a tube into the animal’s lungs.

The ventilator was manufactured by volunteers using a 3D printer at Reesistencia Team, a collective of engineers and doctors supported by the government of the northwestern Principality of Asturias. Now, it’s waiting for the approval of the Agency of Medicines and Medical Products, Spain’s equivalent of the FDA. If validated, anyone with a 3D printer at home will be able to manufacture the ventilator.

All across Spain, people are organizing to produce masks, gowns, caps and other supplies desperately needed by the overwhelmed and understaffed hospitals and clinics caring for COVID-19 patients. Under the quarantine imposed by the government, engineers, 3D printing enthusiasts, sewers, tailors and other volunteers are doing what they can to contribute to the fight against the pandemic in the country, which, as of March 29, had more than 85,000 cases and 7,340 deaths. The initiatives come from all corners of society.

Two starkly different communities have independently galvanized their communities into action: the “makers,” a do-it-yourself subculture of people who create and tinker with devices like 3D printers, and traditional hobbyists like sewing groups. They are finding common ground in the idea that anybody can help to fight the crisis from their home.

The Alicante footwear workers union started Paremos al COVID (Stop COVID) on March 13 to produce masks, protective caps and homemade personal protective equipment around the clock. The group works non-stop, coordinating with the local municipalities to distribute the masks to regional hospitals and primary care centers. Now, their example is being replicated by others all over the country.

Ana Sastre Rocher, a 54-year old woman with a sewing machine, is “eager to help,” she said. Sastre worked as a house cleaner in Pego, a small town in southeastern Spain, near Valencia, until the government decreed “confinement” on March 14. A few days later, a nurse from a nearby hospital encouraged people in a WhatsApp group to follow the example of the Alicante union, and Sastre jumped at the opportunity.

Sixty women in Sastre’s group have organized to sew masks, gowns and caps made with plastic-lined cloth. She says she sews about 50 caps a day. Masks, which are easier to sew, are delegated to the older members of the group, who produce about 300 daily. Although their products have not yet received official approval, they serve as protection for people who are not in hospitals but who still have to work on the streets during quarantine. The group has a collection point for materials at the local supermarket, Sastre explained, where they ask for donated plastic, cloth, soap and other materials that are then distributed to the group by the municipal police. Then the assembly line begins.

“Those who do not have a sewing machine cut the cloth, the police bring us the cuts, collect our production and distribute it to the public workers who are still on the street, to the supermarket workers and to the nursing homes,” she said.

Masks like the ones made by Sastre’s group stop the fluids coming out of a person’s mouth and nose, but don’t guarantee complete impermeability, according to researchers and recent news reports in the country, which is why those wearing them should still maintain the recommended six feet of distance from other people whenever possible.

Their efforts, though, provide an example that could be followed in other countries where medical supplies are running low. In the U.S., there are already local initiatives producing surgical masks, but without the input of the local governments. Guidelines of the Centers for Disease Control and Prevention state that homemade masks can be used to care for COVID-19 patients, but only as a last resort, as protection cannot be confirmed.

In the absence of certified personal protective equipment, medical professionals are improvising. Several outlets reported on Thursday that a 48-year-old nurse at New York’s Mount Sinai Hospital died from COVID-19, the same hospital where days ago staff complained about the lack of protective gear, and a viral Facebook post showed three nurses wearing trash bags as gowns.

A system taken to the limit

In Spain, the situation is even more dire. The country surpassed China in number of deaths last week, and it is behind only Italy in total cases in Europe.

In the most affected regions, such as Madrid or Catalonia, the health system is overwhelmed: there are no free beds, not enough respirators for incoming patients and not enough protective equipment. Those caring for patients are getting sick as well. Among the 85,125 people diagnosed with COVID-19, 12,298 are health workers, 14.4 percent of the total. Four doctors and a nurse have died since the start of the outbreak.

“The hardest thing was the pressure of knowing that more patients were coming and we don’t know what to do with them,” said Beatriz San Sebastián, an emergency doctor from one of the largest hospitals in Madrid. “It feels like we’re flirting with collapse. If you have a patient who needs an ICU and there are no beds, he dies in the emergency room. There are centers that are already like this in Madrid.” Sebastián had to take leave from her job on March 21, when, after a 24-hour shift, she had a fever and tested positive for the virus. Now she is at home with mild symptoms, waiting to regain her health.

Confined at home, unable to go out or see their loved ones, the Spanish are exposed to a torrent of bad news that undermines their morale: constant updates on the number of dead, friends who cannot say goodbye to those who have passed away, an Olympic skating rink in Madrid turned into a morgue; fake news spreads through WhatsApp, along with news about massive layoffs and the shadow of a looming economic crisis. Throughout it all, the dedication of health workers has been a bright spot in the midst of the crisis. Every day at 8 p.m., millions of citizens across the country come to their windows and balconies to applaud the health professionals on the front lines, in unified gratitude for their work.

From idea to reality

It is in this environment that the lack of medical supplies has become a rallying cry for those who want to do more to help during quarantine. The Reesistencia Team began in early March as an idea of engineers Esther Borao and Marcos Castillo, and doctor Ramses Marrero, to connect with Spain’s “makers” to design an open-source ventilator that could be manufactured at home in record time.

On March 16, they posted a tweet with a prototype inspired by the Open self-contained ventilators, — based on the Jackson Rees system, a breathing circuit used primarily in pediatric care in which the air is drawn from the environment into the patient — and called for people with 3D printers and other expertise or materials to join the cause. Two days later there were already 1,500 people gathered on internet forums and in a Telegram group, offering to help.

As of March 26, there were more than 15,000 people participating in the initiative. While the respirator awaits government approval, the group has decided to design other medical supplies like masks, protective glasses and face shields, and they organized themselves by regional area to manufacture and distribute the supplies in hospitals. That same day, the Barcelona Telegram channel announced they had already distributed 1,000 face shields throughout the city.

“There is not enough material in the hospitals, so the screen gives a quite useful protection that can allow the health workers to use simpler masks underneath,” explained Daniel Cruz Rovira, maker and coordinator of the Barcelona province manufacturing area.

In his area, there are already 2,500 volunteers, who each have to register his or her 3D printer model and its location. Each volunteer then connects with their regional manufacturing group, which has the prototypes validated by the local health system. The plans and disinfection protocols are online, so once they get the raw materials, like PVC sheets and rubber bands, they can start producing.

“In Barcelona we are daily producing between 500 and 600 face shields. Everything is voluntary and with donations of material; one of the pillars of our movement is that we do not accept money,” added Cruz-Rovira. In Spain’s healthcare system, each region can authorize and approve the use of homemade gear, like masks. In some regions, Cruz-Rovira said, the approval is done by word of the health officials. “We do not have papers given the special situation, but here in Barcelona we are already distributing to 15 hospitals and we want to progressively reach other smaller health centers and residences,” he said.

“These facemasks have not reached me yet but any initiative like that is positive because we are overwhelmed. We as a staff are dividing ourselves between those who treat COVID-19 and those who do not, because it is true that two weeks ago there were PPEs for everybody and now they are not enough,” said Eva Balcells, a pneumologist at the Hospital del Mar in Barcelona.

In Madrid’s hospitals, the corridors are now crowded care rooms, with people hooked up to respirators in wheelchairs, or lying on the floor. As the death count continues to grow every day, those scenes weigh heavily in the minds of those at home.

“I see those images on TV and I can’t stay at home doing nothing,” said Sastre, the sewer in Pego, by phone. While sewing, she forgets about the next crisis that will come after the outbreak. She only worked for half a month in March and the outlook for April is worse. Her husband, a carpenter, continues to work behind closed doors, but is unable to accept new orders. “The most important thing now is that we overcome the pandemic well, not halfway,” she said.

Every night she goes out and applauds the nurses, doctors and health workers from her balcony.