COVID-19 has shut down some of West Virginia’s biggest fall fairs and festivals. How one town is coping 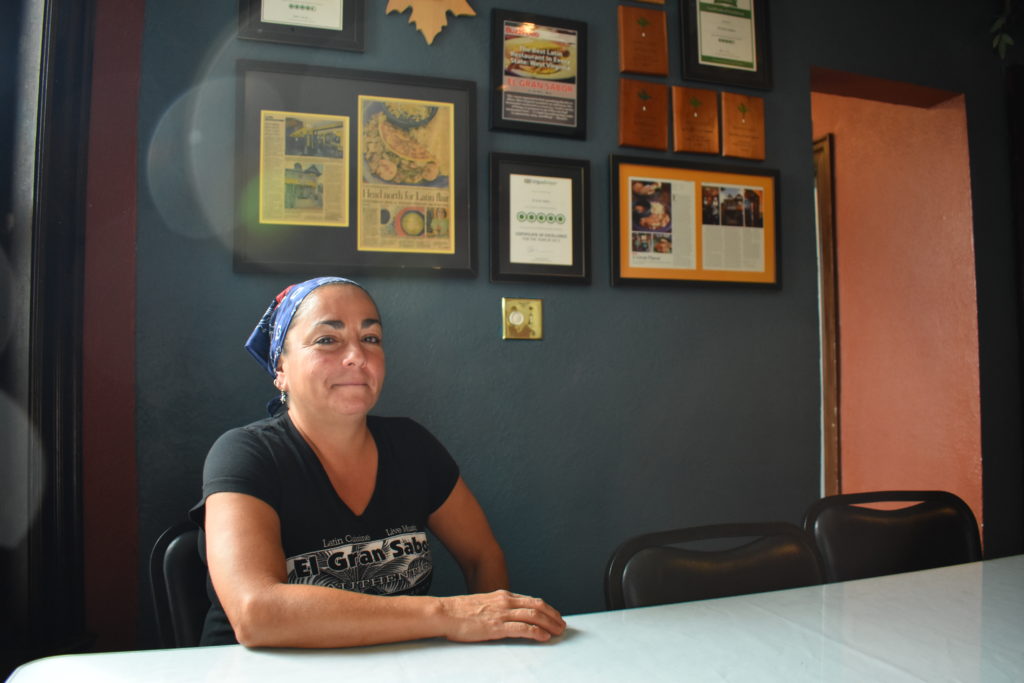 Derdlim Masten, who co-owns the Venezuelan restaurant El Gran Sabor, had hoped that revenue from the Forest Festival would provide her business with a financial cushion. (Photo by Douglas Soule / Mountain State Spotlight)

After hours weaving around and cutting through the Mountain State’s namesakes — large but closely packed mountains blanketed by forests just beginning to show their fall colors — Dornblazer arrives in Elkins, his hometown and the site of the Mountain State Forest Festival.

His grandfather, George Dornblazer, helped start the festival back in 1930. It’s now one of the largest such events in West Virginia, attracting more than 100,000 people to a city of 7,000, and offering more than a week packed with activities like parades, a lumberjack competition, concerts, rides, art exhibits and royal court events.

But Dornblazer and tens of thousands of others didn’t visit this year or last. As the Delta variant sent COVID-19 cases skyrocketing in recent months, Forest Festival organizers canceled the event.

“I missed the opportunity to go back and connect with people,” said Dornblazer, who is 70 years old. “And at this age, we never know how many more opportunities there are going to be. Just this week, we lost one of my classmates to COVID.”

The Forest Festival, which usually begins in late September or early October, is one of many fall events that have been canceled because of coronavirus concerns. Also among those affected is Bridge Day, West Virginia’s largest single-day festival, which includes watching BASE jumpers leap from the third-highest bridge in the United States; and the West Virginia Italian Heritage Festival in Clarksburg, a three-day event that, like the Forest Festival, attracts more than 100,000 people in a typical year.

This year, organizers hoped that these events would represent the light at the end of the tunnel for communities that have struggled through a year and a half  of the pandemic, but they now mark an extension of challenges created by COVID-19. And their cancellations have left holes in the economic and social fabrics of communities across West Virginia.

“Those that have had to cancel, it’s a huge blow for the event, but also the town they’re in,” said Kelly Collins, president of the West Virginia Association of Fairs and Festivals.

An easy decision, a painful result

In 2020, the decision to cancel was far easier.

“I think everyone saw the writing on the wall with all the unknowns around COVID,” said Robbie Morris, the Forest Festival’s director general.

But this year, festival planning was moving full steam ahead. In Randolph County, where Elkins is the county seat and largest city, there were a string of days in July without a single positive COVID-19 case. And across the state and nation, the numbers of new cases were at some of their lowest points in more than a year.

But by September, West Virginia had more cases than ever before. The number of COVID-sick West Virginians in intensive care and on ventilators had never been higher.

“There was a lot of hard work and planning and finances and everything else that went into trying to pull off this festival, and it takes a good amount of work to unplan as much as it does to plan,” said Morris, who is also the executive director of the Randolph County Development Authority. “We still came to the same conclusion that for the overall health of the community, it would be best to cancel, but it definitely impacts a lot of people and a lot of businesses.”

A study of the 2006 festival estimated it had an economic impact of $25.8 million for the state, with large benefits for local businesses and community organizations.

And the sharp rise in COVID-19 cases took away more than just the Forest Festival from the area. Most Randolph County Fair events were canceled, and so was the Polar Express holiday excursion train, which attracted 16,000 visitors to Elkins in 2018.

Last year, West Virginia Gov. Jim Justice doubled the money fairs and festivals typically receive from the state each year to help make up for the losses caused by fair and festival cancellations, which Morris said helped the Forest Festival break even.

But this year, there’s been no word of fairs and festivals receiving an extra dose of cash, and Morris says he has yet to hear if his festival—because it was canceled—will receive any of the usual annually dispersed money. The governor’s office did not respond to a request for comment.

Bobbi Trimboli stood out in front of TipTop, a coffee shop in downtown Elkins, looking up and down the street. If not for COVID-19, this street would be filled with children’s rides.

“My husband, we usually walk here every night [of the festival],” she said. “And we usually sit here and look at the little kids. They’re just so in awe of everything going on, and nothing’s better than to look through the eyes of a child and how they perceive things.”

Aside from her years studying at West Virginia University, Trimboli has spent her whole life in Elkins. She says the festival provides for more than just fun activities; it’s a reunion for the town. She had been excited to see Dornblazer, a close friend since early childhood, at this year’s event.

“It indicates fun, enthusiasm, a little uplifting event in a small town,” she said. “People are out mixing and talking and relating, [things] that we have missed because of COVID.”

Besides the socializing, the festival represents much-needed revenue boosts for Elkins businesses.

For Derdlim Masten, who co-owns the Venezuelan restaurant El Gran Sabor, the extra festival revenue was supposed to help provide a cushion in case something breaks or COVID-19 shutdowns happen again.

“[The shutdowns from last year] made you realize that you have to have something saved for backup,” she said.

“[The money from the festival] gives us the money to do things that are out of our normal everyday budgeting,” said Desire Watson, general manager of the local restaurant and tavern Beander’s. “It’s a huge boost to the staff as well, so a lot of the girls use that money as Christmas money.”

Community organizations, such as the GFWC Woman’s Club of Elkins, have also lost out. The organization’s largest fundraiser is the Juried Arts and Crafts Show it holds during each festival.

Marijane Kiley, that show’s director, said the first COVID-19 cancellation reduced  donations the organization would usually make. With the cancellation this year, she worries the cutbacks will deepen further, with the scholarships the club awards to high school students possibly caught in the crosshairs.

And it’s not just restaurants that would have benefited from the return of the Forest Festival. The county’s lodging businesses have also been suffering, which has a direct effect on government coffers. In 2019, Randolph County received $323,424 in taxes from hotels and motels. That dropped to $233,941 in 2020. As of the end of September 2021, the county had only collected $214,510.

“[The cancellation] really affects the families and the children of our community more than you realize,” Scott said. “You know, you never know what you have till it’s gone.”