ON THE GROUND IN ST. GEORGE, UT

COVID-19 didn’t stop overtourism in Utah’s national parks, it made it worse 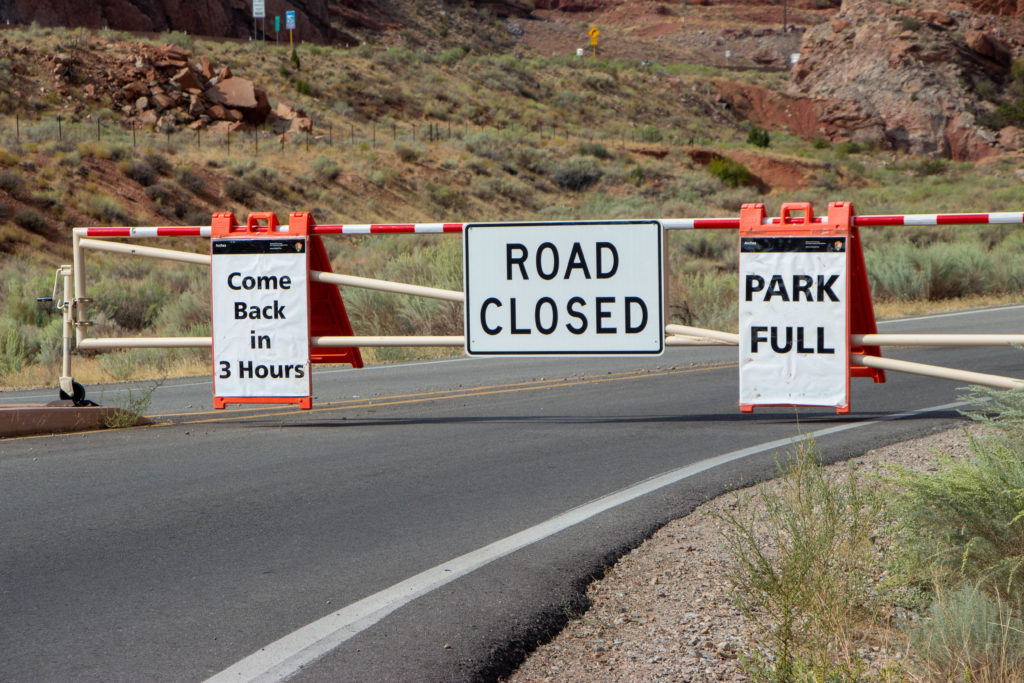 Cars were forced to turn around for hours at a time during busy September weekends, as seen here on September 19, 2020 at Arches National Park in Moab, Utah. Fearing overcrowding amid the coronavirus pandemic, the park has closed every day in October to try to curb crowds. (Photo by K. Sophie Will/The Spectrum & Daily News)

ST. GEORGE, UT — For people living in southern Utah, their backyard is America’s playground. Yet, the chance to experience wide-open space and magnanimous red rock is slowly becoming more like sitting in Los Angeles peak-hour traffic.

Utah’s five national parks — Arches, Bryce Canyon, Canyonlands, Capitol Reef and Zion — were built in the early 20th century and are not equipped to handle the millions of people who flock here for year-round temperate weather and incredible views.

The state’s national parks, comprising thousands of square miles, prepared for the busiest year ever in January. Then the coronavirus pandemic hit.

It affected the international and national tourism industry the worst, cutting visitor numbers from hundreds of thousands a month to nearly none. Although a well-needed break for the environment, local businesses suffered during a particularly devastating season even after an uptick in tourism in the late summer.

“You know, I wish there was somebody sitting there with a big old check at the end of the rainbow, and we’ve gotten our checks from the government and whatnot, but man it’s still not enough,” Lance Syrett, general manager of Ruby’s Inn at Bryce Canyon National Park said.

Combined, over 141,500 employees work in the parks, in gateway town’s hotels and restaurants, and even in trinket shops and gas stations. These parks cost millions of dollars to operate, but with locals hesitating to visit parks due to fears of the usual crowding, as well as COVID-19, jobs started drying up like the desert itself.

But as Utahns discovered their own backyards during the latter part of this summer, they brought new problems with them that officials never saw from the old crowds.

Zion National Park, the fourth most visited national park in the country, shattered tourism records for September and October Despite both coronavirus and a dangerous.harmful algae lurking in the Virgin River, over half a million people visited Zion in October.

“We are reminded that Utah has what people want. People are just so hungry to get outdoors,” Vicki Varela, managing director of the Utah Office of Tourism said.

The Office of Tourism invested millions of dollars over the years in bringing people to our “Mighty Five” national parks, but the cost to the environment and local economies is high.

This uptick in tourism comes with lockdowns, quarantines and closures abounding, and many locals have found refuge from the pandemic in the national parks.

Even though parks took COVID-19 precautions, like requiring masks in buildings, keeping social distance on shuttles and closing some attractions, many don’t adhere to safety guidelines.

And crowds still come, safe or not. Every park deals with them differently. Arches National Park sometimes closes its gates temporarily, but this summer had to turn visitors away more than ever before because of the incredible amount of cars coming to the park. In October alone, Arches closed almost every day for three hours daily.

Zion doesn’t allow cars up the scenic drive, and both Bryce Canyon National Park and Zion have a shuttle system.

But there are many ways in which the parks are behind the curve here. Parking lots in all parks, but especially Capitol Reef National Park, are in need of desperate need of updating. There are no real quotas for how many people can be in the park at once, and though some have floated a ticketing system for specific entry times, they’ve gone unrealized due to lack of funding and bureaucracy.

Parks have encountered another problem with this type of local tourism: major damage to the outdoors due to reckless ignorance of how to behave in our public lands.

This summer, Zion and Arches saw unprecedented amounts of graffiti, which is not only illegal but permanently damages ancient rock.

Damage to the park is deeply hurtful to the people who live, work and care about the park as much as anyone else — the rangers.

“It’s so wanton. You don’t have to do that. You can enjoy and appreciate what’s before you without trashing it,” Zion’s Chief Ranger Daniel Fagergren said. “There are other ways people can leave their mark on the world that’s not trashing national parks.”

Between the graffiti, trash, trampling of vegetation, effects of human activity on wildlife, increased traffic congestion and now the dangers of coronavirus, overtourism impacts everything within the parks and the local economies they support.

The conditions in the parks due to overtourism comes down to one sticking point: there needs to be more education about how to visit a park.

“We have seen a demographic shift in a way they never have before,” park charity Zion Forever Communications Manager Zach Almaguer said. “People need to latch on to those messages of education and spread them.”

Park officials put out signs, distribute pamphlets and even share social media posts in an effort to teach people how to behave in a national park. But to people coming to a park on a whim with no research to back them, many of these messages go unheard.

Moreover, the National Park Service needs to devise new plans to deal with these new types of crowds and continue to follow through on the plans they already have. The pandemic has brought a new wave overtourism, and this is not the time to hold back on enforcing strict guidelines.

According to their mission statement, “The National Park Service preserves unimpaired the natural and cultural resources and values of the National Park System for the enjoyment, education, and inspiration of this and future generations.”

However, rangers like Fagergren have become increasingly more frustrated with overtourism and wanton disregard for preservation for the enjoyment of future generations. How can they properly do their job without the cooperation of the public?

Visit during the off-season and not during peak hours. Come prepared for all weather. Practice safe pandemic measures while you’re there. Don’t graffiti; leave no trace. Contribute to the local economy when possible. And don’t be afraid to do something else in the area to help curb the effects of overtourism.