ON THE GROUND IN AURORA, IL 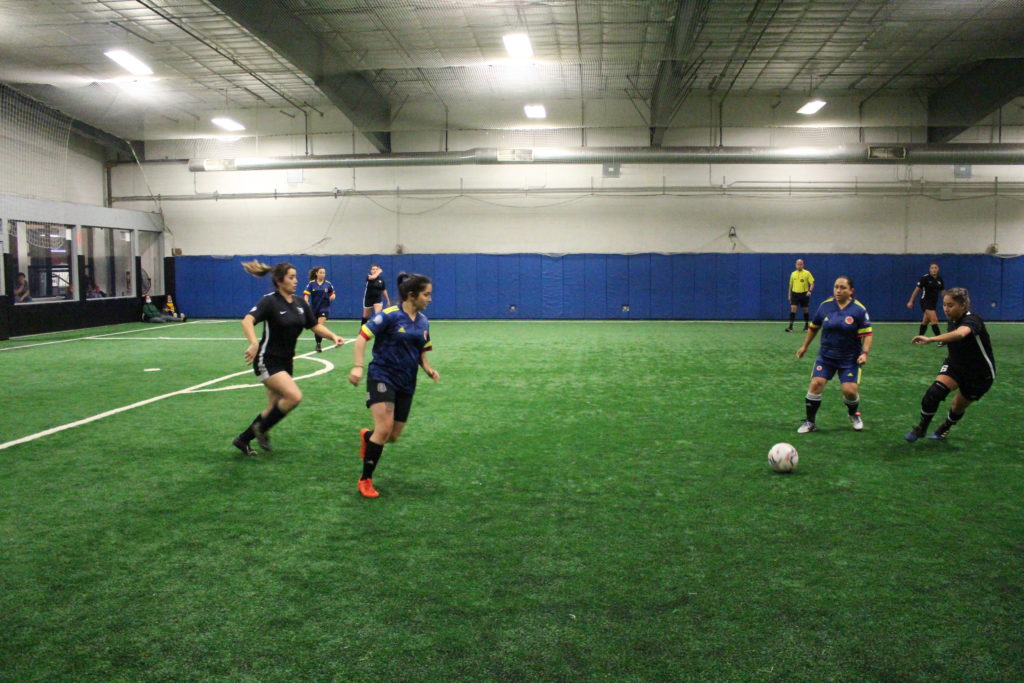 AURORA, Ill. – The first thing visitors hear opening the door of the facility is Spanish music. While the sound makes it seem as if nothing has changed, the building is still. The children who once ran freely, spilling chips as they chased one another, are gone.The screaming mothers and friends at the sidelines are no longer there. The often yelled phrases in Spanish of “El árbitro está comprado” or “Fue foul” have vanished.

Indoor soccer facilities, such as Champions in Aurora, Illinois are staples in the Latino community. They are spaces where families go watch each other compete, places to eat, playgrounds for children, a meeting point to feel reunited with other Latinos. While people are still playing during the pandemic, the benches that once were packed with spectators now have a few scattered groups, mostly wearing masks.

The virus has spread to even the smallest of communities, taking more than 229,000 lives in the U.S., according to the Centers Disease Control and Prevention. Latino communities have been robbed of family reunions. Those who see each other risk infection. Businesses adapted to new regulations but now face massive debt. Many don’t have the choice to stay home and go to work every day, worried they might come home sick. Everyone is hurting in some way and something as simple as soccer has faced an unfortunate domino effect in its entire industry.

“Soccer has always been a huge thing that brings people together,” said Andrea Correa, a local soccer player in Aurora and surrounding suburbs. “Especially within the Latino community, it’s what we all have in common.”

Correa lives in West Chicago but plays soccer in different suburbs, such as Aurora, Bridgeview and Woodridge. The 25-year-old not only plays soccer as a pastime but currently works as a marketing and content creation intern at Sky Blue FC, a team for the National Women’s Soccer League.

Soccer is more than just a sport for Correa and those she plays with; it’s a part of their lives. “To take it away makes us feel like we have nothing we can do,” said Correa. “It just takes away a place for us to release everything that’s going on right now.”

In March, an Illinois shutdown closed down parks and non-essential businesses. Communities like Aurora, where some ZIP code populations are 75.7% Hispanic, according to the U.S. Census Bureau, faced a greater risk of getting COVID-19.

Its particular effects on soccer at the local level shows how interconnected businesses and the lives of the Latino community can be. Shutdowns closed down parks, soccer facilities and businesses associated with soccer, causing the entire soccer industry to suffer. Once they reopened, players made the choice to risk their health for their beloved sport and soccer business owners fought to keep their livelihoods afloat, constantly worried if Illinois would shut down again.

In March, Zigno Soccer, a family owned soccer shop, was forced to shut down. Its owner, Juan Rodríguez, said closing down not only affected him economically but morally as well. Rodríguez explained that his family attempted to obtain a Small Business Administration loan through the Paycheck Protection Program but said they didn’t qualify because of a small amount of money they owed the Internal Revenue Service. Even when they offered to pay the amount owed, they were denied the loan.

“We didn’t have the economic support [from the government] and we had to talk to the landlord and they didn’t want to support us very much either,” said Rodríguez in Spanish. The small business owner fell into debt over the four months he closed his store. He owed about $12,000 and almost had to permanently close. By digging into his savings and speaking again to his landlord, Rodríguez was able to pay half of his debt and work out a payment program with his landlord to pay the rest.

But closing was only one symptom of the wider reality: people weren’t playing.

“If they don’t let the teams and leagues play it affects us because if people aren’t playing, they don’t come to buy,” said Rodríguez. “Very little people would come because there wasn’t any soccer. The parents would say why buy a shoe or something for soccer if they weren’t [their kids] going to use it.”

Soccer can currently be played at Level 1 and Level 2 in Illinois, which specifies no-contact practices, intra-team scrimmages (with parental consent for minors) and no competitive play, according to the Illinois Department of Public Health.

Like Rodríguez, Enrique Pérez lives on soccer. His business is called Liga de Fútbol Chicago. Though he did not go in debt during the lockdown, he did lose a significant amount of income during that time because there were no teams playing and his business revolves around organizing teams to play in leagues across several suburban towns.

Even though people are now playing, Pérez estimates there are 30 to 40% less people than before, noting that people are still afraid to play.

“Sometimes I struggle at the indoor when I tell people they have to put on their face masks,” said Pérez in Spanish. “People are tired of being at home. It’s really hard after eight or nine months. People get tired and they don’t even care that much.”

Losing part of the community

Pérez stresses the importance of soccer in connecting with your Latino community. “Here in the U.S., the majority of people are stressed by their commitments. What they have to pay here, pay there. They live a sedentary life,” said Pérez. “It’s a way to de-stress. You forget about everything. You just want to score one goal. That’s all you want to do in 40 minutes. And I think that’s a way of life for Hispanics. You just want to play to forget about life.”

Correa, accustomed to playing soccer twice a week, stopped playing when the pandemic hit. Living with her grandparents, she said their medical conditions would make them more vulnerable to the virus.

While sacrificing a sport may seem minor in comparison to protecting the health of one’s grandparents, it is still a sacrifice. “It just felt like there was something missing every week that I didn’t go play,” said Correa, explaining it made it more difficult when she saw others on social media still playing.

Eventually, Correa was drawn back to the game and in September, when cases in Illinois were low, she made the choice to return to the field, taking every precaution possible. While her grandparents were still the first thing she thought about, she created a routine to protect herself as much as possible and keep her loved ones safe.

During the game Correa made sure to not touch her face or anything else directly if she didn’t need to. After a game she would sanitize her hands and head straight home. While her grandparents slept she changed her shirt, showered and overall kept things as clean as possible. The next few days she would try and not interact directly with them and made sure to keep some distance between them, Correa said.

With the positivity rate in Illinois rising, with three consecutive days holding at a higher than 8% test positivity rate, some restrictions are returning, such as the closure of indoor dining for restaurants and bars.

Now Correa is questioning whether she should stop playing soccer again. “Right now it’s kind of on the fence,” said Correa. “If I go, yes, it’s going to be good for me, mentally and physically because that is the way I get my exercise and it’s just a time for me to do me. But if I go, what if I attract something and then I bring it to the house? I have my grandparents here, they could get sick and then it’s all just going to be on me.”

Correa said her experiences playing locally have been mixed, where some locations follow protocol through masks and social distancing but other places have spectators who don’t wear a mask.

Correa feels owners of the facilities should enforce the rules. When people come in and take off their masks, it makes others question whether they should even wear their own mask, said Correa.

“If somebody complains, the place can get shut down right away and there goes soccer. As a player who plays locally, I try so hard to follow the regulations. I don’t want the indoor facilities to shut down,” said Correa.

“This year 2020 has been very special in every way. We will never forget it because some people lost their family, people saw things they never saw before. Closing down, losing their jobs, not playing soccer,” said Rodríguez. “It’s been very complicated. Hopefully little by little it gets solved.”

Rita Oceguera covers Chicago’s suburbs for the Chicago Reporter. This dispatch is part of a series called “On the Ground” with Report for America, an initiative of The GroundTruth Project. Follow her on Twitter: @ritaguera25