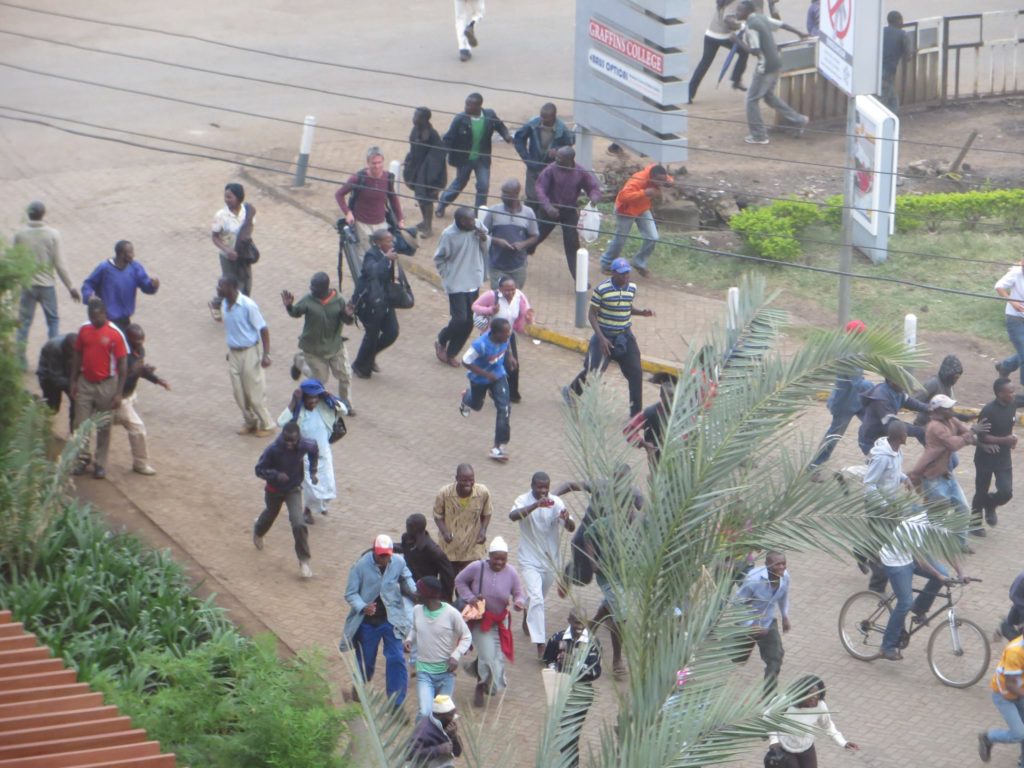 67 people were killed and at least 175 were injured during the mass shooting at the Westgate shopping mall in Nairobi, Kenya, on Sept. 21, 2013. The attack was carried out by Al-Shabaab, a Jihadist militant group whose name translates to "the youngsters." (Photo by Anne Knight/Wikimedia Commons)

NAIROBI — A father and his young son had just stepped into Savani’s bookshop to browse some toys when gunshots began to echo through the polished corridors of the Westgate shopping center, Samuel Mwangi remembers.

“My first thought was that it was a bank robbery,” said Mwangi, 30. He stepped to the balcony of the crowded, upscale mall to look, jumping back as bullets sent sparks flying from the floors and walls. “Then I realized it was an ambush.”

It was about noon on September 21, 2013, and Mwangi had just begun his shift. A longtime employee of the bookshop, he called his boss right away. The response: Turn off the lights. Hide in the shop. Stay quiet.

Mwangi quickly brought everyone he saw to the store’s back office, he said. The 10 people huddled in the darkness, protected only by glass walls and fumbling to silence their cell phones as panicked loved ones bombarded them with calls and texts. As Kenyan authorities failed to mount a coordinated response, four young gunmen loyal to al-Shabaab used assault rifles to hunt shoppers for hours, killing 67 and wounding 175.

“I told God that if I come out of here alive, I’ll be very thankful,” said Mwangi, who was raised by a strict Anglican mother in central Kenya but has stopped attending church. “And I’ll take it as a sign that I still have a lot of work left to do.”

The group inside Savani’s battled shock, tensely huddling on the floor and whispering to one another. Mwangi said he did what he could to entertain the young boy as the steady sound of gunshots pierced the air. The killers never entered the store. The shooting stopped a few hours later after the gunmen were cornered and killed. Then the group waited a few more hours for rescuers to free them, at about 6 p.m., Mwangi estimated.

Most of the hundreds of survivors from throughout the mall and its parking lot headed to the nearby Oshwal Center, a private space run by Jains who opened the gates that day. Jainism originated in India on principles of nonviolence and asceticism. The Jains tended to wounds, offered food and water, charged phones so survivors could connect with loved ones. They also provided emotional support for many in crisis.

“In the span of a very few hours, they organized everything,” said Mwangi, who said he decided not to talk about his experience while at Oshwal. He took a bus to see friends instead, answering their questions late into the night.

“I live for the moment,” Mwangi said. “More than being traumatized and thinking about what has happened, I’m ready to forget the whole thing and move on.”

But in a very literal sense, Mwangi has returned to the same place.

He now works at a new bookseller just down the hallway from where Savani’s once was, called Educate Yourself. The shop is owned by a relative of his former employer at Savani’s, who decided against reopening at Westgate.

Business has been slow since a refurbished, scaled-down version of the mall reopened last July — “we still have a way to go,” Mwangi said, giving him time to sit down and reflect on a recent afternoon. The bookshop is full of eclectic, colorful volumes including an assortment of study guides for university admissions tests, self-help manuals, children’s books and African novels like Chinua Achebe’s “Things Fall Apart.”

The atmosphere inside Educate Yourself is like that of a library, just far enough removed from the metal detectors and armed guards at the main entrance, the “Opening Soon” signs that still hang in front of several storefronts, and the relentlessly cheerful pop music echoing through the mostly empty halls to delve comfortably into the story of what happened that September afternoon.

Mwangi is one of many young Nairobians who are part of a generation caught in the crossfire of violence perpetrated by radical Islamist groups like al-Shabaab on malls, universities, hotels and buses. The group, whose name translates from Arabic as “Movement of Striving Youth” has specifically targeted Christians in some of its attacks, which have become more frequent since 2011.

That is when the Kenyan military launched an offensive against al-Shabaab’s stronghold in neighboring Somalia, which has been mired in civil war since the 1980s, displacing hundreds of thousands of refugees to Kenya.

Many Kenyans are second-guessing the wisdom of Kenya’s military operation in Somalia, and remain embarrassed by the Kenyan government’s failures on domestic terrorism. But Christians and Muslims alike say they will not allow al-Shabaab to break the country’s long history of religious coexistence. They are far more concerned that insidious government corruption is leaching away desperately needed investment and attention to the country’s well-being.

“There is a lot of disconnect between people and government,” Mwangi said. “People don’t have faith and confidence in the government. They feel shortchanged.”

At the same time, the newspaper reported that “money lost in public procurement corruption and the bribes paid by the private sector combined would create 250,000 jobs every year.” A flip through any day’s issue of the newspaper or just about any conversation with any Kenyan leads quickly to a story of official bribery, extortion or graft. The problem grips every institution of Kenyan society, from the health care system to the police to the media.

The National Ethics and Corruption Survey 2015 found that half of Kenyans believe corruption has increased since current President Uhuru Kenyatta took office in 2013 despite his repeated pledges to curtail it. Transparency International ranks Kenya as one of the most corrupt countries in the world, ranking 139 out of 167.

Terror attacks only make things worse for survivors and the communities that depend on business as usual, however unfair the system may be. Westgate was closed for nearly two years, and the experienced bookseller Mwangi spent most of that time bouncing between opportunities, searching for a good fit.

“The easiest thing to say is that your job is gone,” Mwangi said. “You need to start all over.”

And yet, he found his way back to books.

Alysha Kassam, 20, is a college student working part-time at Educate Yourself. A book lover and aspiring humanitarian, she’s a Muslim whose parents import luxury goods from the United Kingdom. She didn’t experience the attack, but lives not far from the mall. Sitting beside Mwangi, she downplayed the ongoing security fears that are keeping many shoppers away from Westgate.

She also swatted away the idea that somehow Kenya’s Muslim community should be judged for al-Shabaab’s actions. “No one can say Muslims are good or bad,” she said. “There are always three sides to the truth: my truth, your truth, and the truth itself.”

Kassam said she’s studying business management and trying to build confidence so she can make a living protecting the environment. Ultimately, Kassam hopes she can open a soup kitchen for the hungry.

Al-Shabaab’s ongoing terror campaign has made life nerve-wracking for young Kenyans trying to get an education, to hold a job, and sometimes just to relax.

In the three years since the Westgate attack, al-Shabaab has conducted mass killings on the island resort of Lamu and in the northeastern counties of Mandera and Garissa, where attackers massacred 147 people at Garissa University College last April, most of them college students.

And US airstrikes against al-Shabaab in Somalia, coordinated with the Kenyan government, have continued what has become a global War on Terror with big implications for Kenya’s next generation. The war is debated extensively, with some arguing that blowback from the war on al-Shabaab takes an unfair toll on the country’s youth. Others argue that national security is paramount and worth the sacrifice.

The argument is familiar to the bookseller Mwangi, who said he reads news blogs every day, especially while waiting in traffic during the hour-long commute between his home and Westgate.

“As Kenyans we should be very supporting of government in its new security measures,” he said. “Of course, the government should have calculated better than it did.”

But for Mwangi, it’s a bigger question about democracy in Kenya.

In 2007-08, the world took pause when post-election violence killed 1,200 people, displaced 350,000 and severely damaged the country’s trade and tourism.

The 2013 election that brought in President Kenyatta went far more smoothly, with help from international NGOs and Kenyan civil society groups, but Kenyatta’s popularity is very low ahead of another election next year. And corruption continues to undermine Kenyans’ faith in government as a whole.

“If you ask me about democracy in Kenya, we have yet to get there,” Mwangi said. “We still have a lot of teething problems. In a democracy, citizens put leaders on their toes. Leaders must work for them. Here, they really don’t.”