In Copenhagen, cycling to work is ‘just the obvious thing to do’ 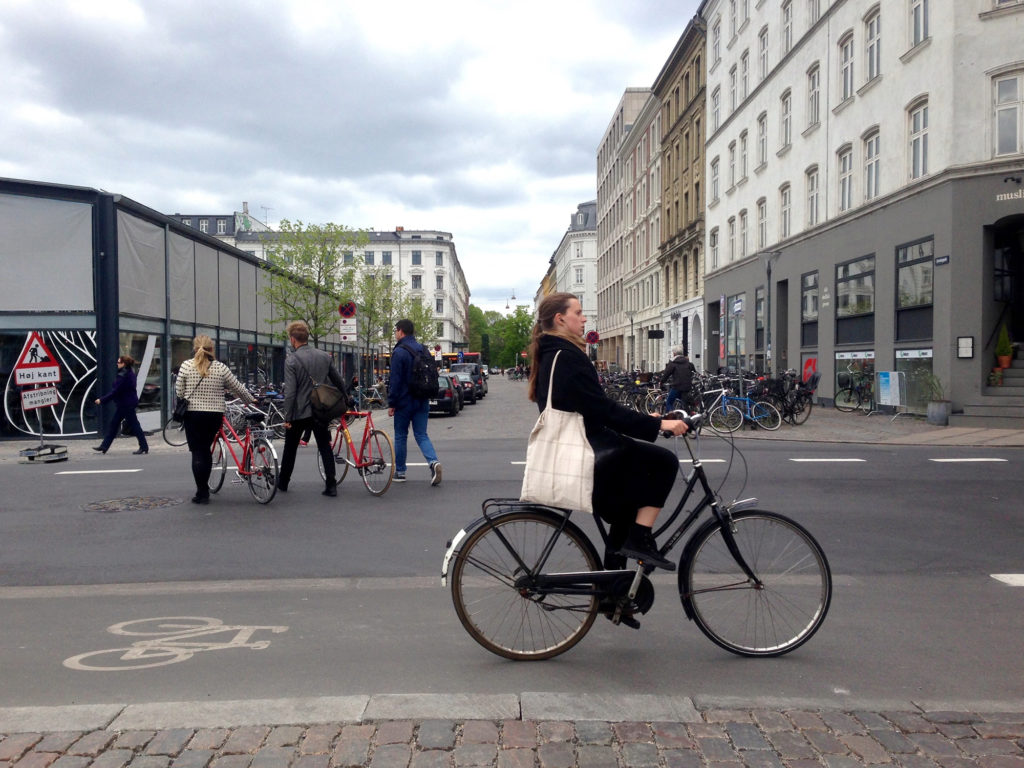 A woman cycles into central Copenhagen. This year, the city ranked first in an index of the world's most bike-friendly cities. (Photo by Charlotte Weiner/GroundTruth)

COPENHAGEN, Denmark – If it were up to Niels Hoé, his job would eventually become obsolete.

In a cafe in Copenhagen, the founder of sustainable transport firm HOE360 sets down his coffee, and gestures outside. The front of the cafe is a floor to ceiling window; on the other side of the pane, bikers fill the streets. A woman pedals past, coat ballooning in the wind. Next glides a mother with a small child in the front of her cargo basket.

But Hoé says that he doesn’t see these bikers as environmentalists. It’s rush-hour. He simply sees them as Danes on their afternoon commute.

“The whole key is that we don’t see it as a movement, as anything special,” Hoé says. “Cities should aim to get to a point where it isn’t even something special to talk about.”

“It” – the popularity of biking – has made Copenhagen a model for cities around the globe. Half of the city’s 580,000 residents commute to work or school on bike and last year, Copenhagen edged out Amsterdam for first place in an index of the most bike-friendly cities.

In the face of climate change, the urgency of reducing carbon emissions and minimizing pollution has mounted. And according to the UN Intergovernmental Panel on Climate Change, raising the share of bicycle trips from 1 percent to 10 percent would cut a city’s carbon dioxide emissions by 8.4 percent. Hoé and others believe that biking is the key to developing environmentally sustainable cities.

But to champion this green transportation, they rarely frame their argument in environmental terms.

“I wouldn’t go anywhere in the world and try to convince them to do cycling for environmental reasons,” Hoé says.

Marcus Merit, who works at the Danish Cycling Embassy, explained why.

“If you go out to any random person on the street and ask them why they cycle, they will most likely say, ‘Well, it’s the fastest and easiest way to get around,” he said.

It’s a line I heard over and over again from Danes in Copenhagen – ‘First and foremost, we do not bike because it’s environmentally friendly. We do it because it is the easiest way to travel.’

“The whole idea of the self-sacred cyclist – the really annoying type that goes, ‘Oh, look at me, I’m saving the environment by cycling’ – you don’t see that as much in Denmark, because it’s just the obvious thing to do,” Merit said.

Riding through Copenhagen, bikers might see garbage cans tilted at an angle towards the bike path for easy disposal. At a red light, they could sit on their bikes and prop their right foot up on a footrest long enough for two or three bikers, then wait for the light to change. During rush hour, they might hit a purposefully sequenced green light after green light. These examples of “micro-infrastructure” have enabled Copenhagen to become an increasingly bike-friendly city.

“It’s the little things that make a difference,” said James Theom, project coordinator at Copenhagenize Design Co., the firm that publishes the bike-friendly cities index. “[Copenhagen] actually takes the bicycle seriously as a mode of transportation.”

Theom believes that other parts of the world could replicate Copenhagen’s success. But infrastructure must come first – infrastructure that brings together individual interests such as ease of transport, time, cost, and more, all in combination with the collective interest of sustainability.

Hoé says that, ideally, a city would roll out bike-friendly infrastructure fearlessly and all at once, then revise and improve from there.

He gave Buenos Aires as an example, where leaders have built a hundred miles of bike lanes in the past three years. He says that the infrastructure, mainly comprised of rubber speed-bumps that separate roads from bike paths, is by no means perfect – but it is, at least, a start.

At the cafe, Hoé neared the dregs of his coffee; he started to pack up, ready to hop on his bike and head home. He has spent the last 15 years spreading the word of Copenhagen’s approach to biking, and is ready for the message to reach beyond his home city.

“It’ll take time,” Hoé says. “But you have to start somewhere.”