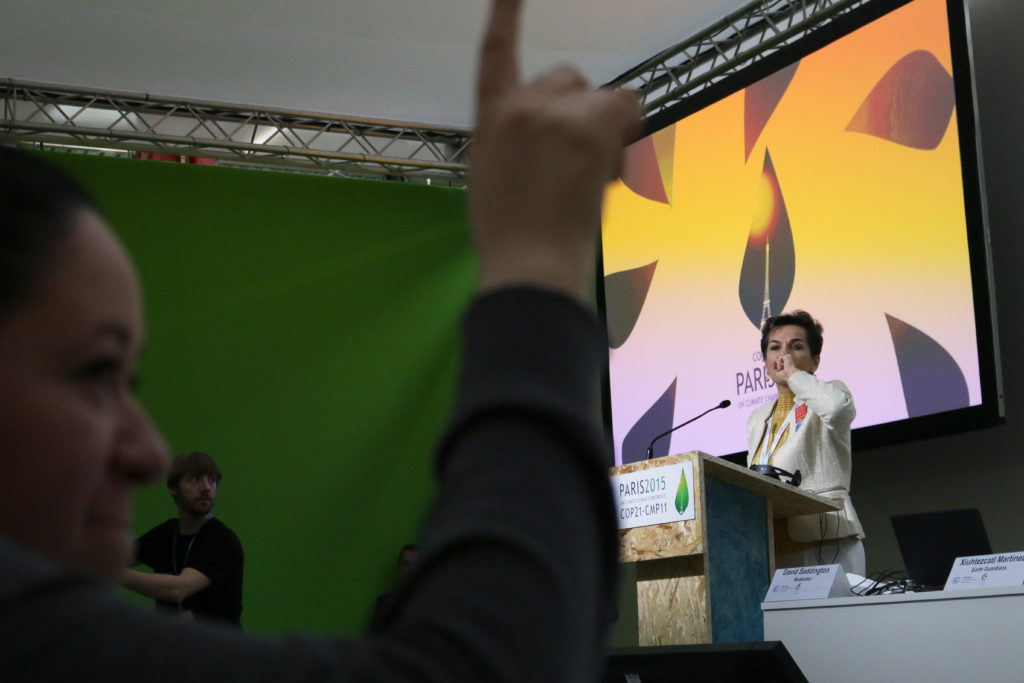 An audience member raises her hand as Christiana Figueres, executive secretary of the UN Framework Convention on Climate Change addresses a panel on youth. (Justine Calma/GroundTruth)

LE BOURGET, France — It was an opportunity that youth climate activists from around the world had long ago marked on their calendars.

Youth and Future Generations Day here at COP21, they thought, presented an opportunity to challenge authority and make young voices heard by world leaders. While energy was higher than usual on Thursday, and the day began with enthusiasm, it ended in frustration for many.

“[Climate Change] is about the survival of my generation. Every generation to come will be affected by decisions made today,” said Xiuhtezcatl Roske-Martinez, an eco hip-hop artist and youth director for Earth Guardians to open the intergenerational panel. Last year he and a group of young plaintiffs sued the US government for violating their constitutional rights by failing to adequately address climate change.

Christiana Figueres, executive secretary of the UN Framework Convention on Climate Change (UNFCCC) then gave an impassioned speech to her young audience. “This is not just a COP. This is the COP of your generation,” she said.

“I have no doubt that we are going to be reaching an agreement next year,” said Figueres before quickly correcting herself. “Wooh! Next week! Next week!”

“However, here’s a concern I hope we all share,” she continued. “Is it going to be as transformative as we need? A gradual shift is not going to do it.”

Her question raised an issue weighing heavily on many young people’s minds.

After speaking, Figueres took a group photo on stage surrounded with youth — and then she walked away. Figueres was only the second speaker of the event, and the panel continued for another hour without her. That didn’t sit well with youth who had attended the event in hopes that the COP21 head honcho would more deeply engage with them.

“I’m so deeply disappointed that Christiana Figueres left the room before youth had the opportunity to speak or ask her any questions,” said Anjali Appadurai, a youth delegate representing India and Canada. “I hope this message reaches her.”

“We need power to be willing to be destabilized to be willing to be challenged so we can come forth with a new world,” said Appadurai, speaking at the panel. “If Christiana Figueres was here, I would ask how she plans to step aside and let youth take the step we need.”

Appadurai and other young people continued to challenge COP21 leaders on social media and through a demonstration inside the conference later that day. Young people who came to COP from all over the world staged a “die-in,” laying on the ground of the main thoroughfare underneath a large replica of the Eiffel Tower, to imitate youth who could be lost due to effects of climate change.